NewsPaperthe art of publishing
HomeCOVID-19It might surprise you, Tory Huw, but to protest is our right
0

It might surprise you, Tory Huw, but to protest is our right 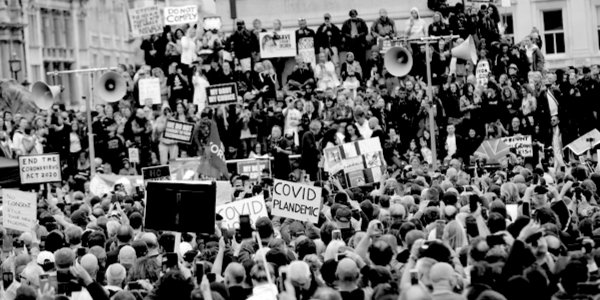 IS Huw Merriman, the Conservative MP for Bexhill and Battle, aware that the right to protest remains a fundamental human right, spelled out under Article 11 of the Human Rights Act?

I ask because following our coverage of the BBC’s media blackout of last Saturday’s anti-lockdown and anti-vaccine passport protests in central London, including this article by me, TCW reader Nora Darlington asked the following not unreasonable question of her MP: ‘Does the government instruct the BBC to censor news? So why do we pay the licence fee if it is for censorship by this government?’

Mr Merriman’s response? An immediate none-too-pleased reply which set out to put Nora in her place. She forwarded it to us:

Thank you for your email.

I chair the cross-party Parliamentary group for the BBC. I can tell you that no one instructs the BBC to censor news and it wouldn’t do so either. Much as I would wish for restrictions to be eased earlier, there is no justification for people breaching them with protests. That goes for all protests. As such, I don’t find the arguments of this author appealing given she is demanding coverage for an event which should not have taken place.

Chair of the Transport Select Committee

MP for Bexhill and Battle

A tad terse given the eminently reasonable nature of the suspicion? And somewhat inattentive to our rights to protest, Nora suggested to me in her covering email.

Well I checked – and I thought drawing Mr Merriman’s attention to Liberty’s website would be instructive given his slippery grip on our rights. It sets out the law on protest as it applies to England and in the current circumstances, explaining quite clearly that:

‘Although coronavirus regulations prohibit outdoor gatherings of six people or more in public, there is an exception in the rules which allows for protests and similar events to have more than six people attend. You are allowed to gather in a public outdoor place as long as the gathering has been organised by a business, a charity, a benevolent or philanthropic institution, a public body, or a political body; the organiser of the protest has carried out a risk assessment which meets the requirements of the Management of Health and Safety at Work Regulations 1999, and has taken all reasonable steps to limit the risk of transmission of coronavirus, in line with the risk assessment’.

This means that public authorities such as police forces have to act in a way that doesn’t breach your rights. They must also take certain steps to help peaceful protests.

These are ‘qualified’ rights, which means the Government is allowed to restrict them if it is proportionate and in the public interest, which Mr Merriman appears unilaterally to have decided it is not. It’s no surprise to find that he voted to extend coronavirus regulations (formally known as the Health Protection (Coronavirus, Restrictions) (Steps) (England) Regulations 2021)  until September – emergency laws which allow for a restriction on our right to protest in response to the pandemic.

However, whether you decide to attend an organised protest of which the police have been advised is still up to you. Nor do you have to answer police questions, but can ask ‘under what power’ they are asking you questions, for you to check the officer is acting lawfully, taking the officer’s shoulder number and keeping a note of what you were told in case you need to refer to it later.

Refusing to provide information to the police is not obstruction, however. It is your legal right. For further information check Liberty’s Stop and Account guidance.

Though the police have the power, under the regulations, to tell you to disperse or return home if they believe you are gathering in a way which is banned, including gatherings of more than six people outdoors, or more than two people indoors (unless one of the exceptions applies), if you are gathering for the purposes of a lawful protest, or everyone in your gathering is from the same household, you should state this to the police. If a police officer still tells you that you are breaching coronavirus regulations, they should give you the chance to leave and return home voluntarily first – and not automatically arrest or fine you.

Mr Merriman might think before he writes. However much he approves of authoritarian government, he is on very questionable grounds asserting protests should not take place. That is his illiberal opinion, not the law.