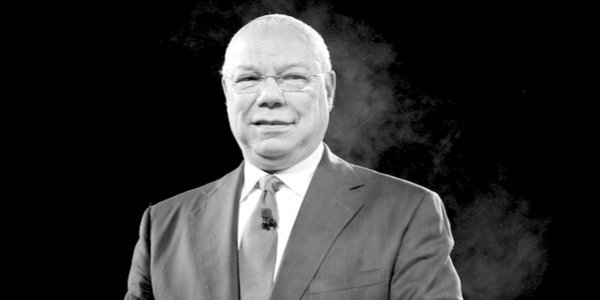 FORMER US Surgeon-General Jerome Adams is claiming that ex-Secretary of State Colin Powell died because some Americans were not vaccinated against Covid.

Interviewed on CNN’s Cuomo Prime Time, he was asked if 84-year-old Powell’s death from coronavirus complications while fully vaccinated showed having the jabs was unnecessary.

He replied that ‘people out there are in the vaccine-resistant crowd want to divide us, react to misinformation. They need the correct facts’.

Powell’s was a so-called ‘breakthrough death’ – where someone dies despite being doubly vaccinated.

Adams said: ‘There have been 7,000 breakthrough deaths since people have been fully vaccinated, starting January of this year. Of these, we know about 6,000 of them have been over the age of 65, as General Powell was.

‘We know a disproportionate number of them have been people with co-morbidities, as General Powell had. So he was someone primed for a breakthrough infection.

‘He’s someone who did what he was supposed to do. He got vaccinated. But it proves we can’t just say we’re going to protect the vulnerable, we’re only going to worry about those people getting vaccinated, and everyone else doesn’t matter.

‘We all matter. And the fact is that General Powell died because we didn’t take the proper measures to lower spread in this country. We didn’t do everything we could.’

He added: ‘Please, please hear me, for the sake of General Powell and everyone else out there who is vulnerable and is doing the right thing. Please consider getting your vaccine if you haven’t yet.’

Adams’s bizarre deduction is surprising for someone who was considered qualified to be Surgeon-General. But it is very much in line with the way the fully vaccinated are beginning to regard those who decline the jab. In their view, the unvaxxed must be vaccinated to protect the vaxxed.

The issue has also come into sharp focus in Switzerland, where health minister Alain Berset was due to address students in Zurich about Covid, politics and health. He believes that the Swiss population will need to be 85 per cent fully vaccinated to control the spread of the virus.

This month, many students will be attending the ETH (Federal Institute of Technology) in Zürich in person for the first time, after two periods of lockdown and a lot of distance learning. But classes will take place only if vaccination certificates are shown – sharply dividing opinion amongst students and lecturers.

One professor from Basel University has said he will refuse to hold any in-person lessons if unvaccinated and untested students are allowed into lecture halls.

However, the University of Lugano says it will not be introducing the certificate at the outset. And the EFPL technology institute in Lausanne reckons that by offering in-person and online teaching, unvaccinated students will not be disadvantaged.

Some views reported from students seem to echo those of Adams in the US. ‘I am happy to be able to use the certificate and do what I want to do,’ said one. ‘It’s a good idea and hopefully encourages non-vaccinated people to get their jabs so we can move forward.’

Another said: ‘I would make the vaccine mandatory. I would treat this vaccine like a driver’s licence or a residence permit. If not, out of the community and working life!’

Thankfully, there are others who don’t consider the unvaxxed selfish and irresponsible. ‘The pass is a totally useless certification, since even vaccinated people have the same chance of getting infected as unvaccinated, even with a second and third dose,’ said one student.

So Mr Berset may well be greeted with a hostile reception in Zürich. Demonstrations against his policies have already been held throughout Switzerland.

But other governments have rolled out the same arguments – that the unvaxxed are a threat to the obedient vaxxed; that any further lockdowns would be economically disastrous; and that everything possible must be done to prevent undue pressure on existing health facilities.

Increasingly though, these arguments are coming under fire. In Wednesday’s Daily Sceptic, the case was made for the evidence of robust natural immunity from Covid infection; that vaccinated people can spread the Delta variant, and that six months after having the Pfizer vaccine, antibody levels in healthcare workers had decreased substantially.

An updated report on the Yellow Card warning system by the UK Medicines and Healthcare Products Regulatory Agency (MHRA) showed that there had been a total of 1.2million adverse events among the vaccinated, and the total of deaths was reported at 1,719.

Lockdowns have also been shown to create considerably more problems, including health issues, than they solve. Currently it is estimated that NHS waiting lists for routine procedures will take five years to clear.

Never mind the expertise of geriatric and respiratory consultants – the statistics pertaining to the pandemic are proving to be a spin doctor’s dream. And, as many now perceive, they are being skewed to serve political rather than purely health objectives.

Pressuring those who decline the vaccines by blaming them for the Covid-related deaths of the vaccinated is irrational, unscientific, and downright irresponsible.

It is setting one group against the other, and will rapidly escalate, with frightening consequences.  Adams should accept the fact that Colin Powell was elderly, with serious co-morbidities, and undoubtedly an already compromised immune system.

In such situations, routine infections – colds, flu, pneumonia – are well known to hasten the end of life. Even Covid. To try to derive political advantage from the very sad passing of a national figure is nothing short of grotesque.

But help could be at hand. The Attorney-General in the US state of Nebraska has said his office will not seek disciplinary action against doctors who prescribe hydroxychloroquine or ivermectin to treat or prevent Covid-19.

This is as long as they are not engaging in any misconduct – such as neglecting to obtain informed consent, deceiving patients, prescribing excessively high doses, or failing to check for contraindications.

It is quite a turnaround since the days when then President Trump’s recommendations for such medications gave rise to scathing criticisms, cries of ‘horse pills’, and censorship by FaceBook, Twitter and YouTube.

Perhaps the medical authorities will now look closer at the experience of the Uttar Pradesh province of India, where – while vaccination numbers are low – the drug treatments have been widely used and there have been indications of their effectiveness.

The US authorities, the World Health Organisation, and regulators in Australia have all sought to restrict or ban these treatments outright. Meanwhile, two UK organisations, the Front Line Covid-19 Critical Care Alliance and the British Ivermectin Recommendation Development Group,  are campaigning for their off-label use.

Perhaps it’s time Adams and his fellow cynics had an honest look beyond their own self-interests to justify their appointments as genuine health care professionals.