NewsPaperthe art of publishing
HomeNewsIt’s the Ten Commandments, not the Ten Suggestions
-12

It’s the Ten Commandments, not the Ten Suggestions 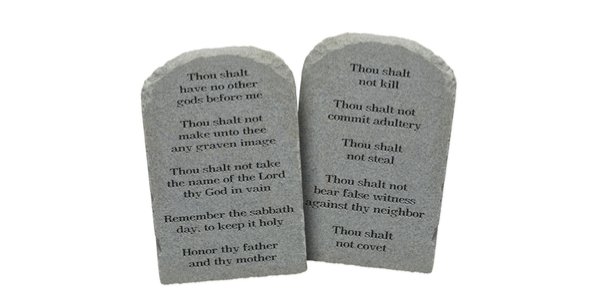 This is the second of a series of sermons by the Rev Peter Mullen, requested by the editor of The Conservative Woman, which we will be publishing through the Advent and Christmas-Epiphany season. You can read the first here.

AFTER Death comes the second of Advent’s Four Last Things: Judgement. As soon as children learn to speak, they cry out those words all parents hear a thousand times: It’s not fair! The desire for justice, for fairness and right dealing goes deep and it is the basis of the faith of the Old Testament. For the Jews after Moses, what guarantees justice and right judgment is the Law, based on the Ten Commandments. This Law is not at all like modern ethics which are merely utilitarian; in which moral decisions are infinitely various and all that matters is that the ends justify the means.

And so we license all manner of atrocities. Human embryos may be created in the certain knowledge that some will be killed in the process of scientific research. The former Bishop of Oxford, Lord Harries, once tried to justify this on BBC Radio 4’s Thought for the Day by arguing that many embryos die naturally anyway (which is a bit like saying that accidentally falling under a bus is the same thing as being pushed). Or twelve-year-old girls are given the morning-after pill. Or we murder 200,000 unborn children every year because having a baby would interfere with a woman’s lifestyle. Enthusiasts for abortion claim that a woman has the right to do as she wisheswith her own body. These apologists must have attended the same logic classes as Lord Harries: an embryo is not a woman’s own body.

Nietzsche was right to deplore our hedonistic creed as pig philosophy.

Contrasted with modern ethics stands the Law of God. The moral rules are not infinitely variable: some things are right in themselves. God did not give us the Ten Suggestions. He said Thou shalt not. The Law of God is timeless and universal.There is an amusing philosophical howler which says that of course it’s possible to have true morality without believing in God: lots of civilised societies have disbelieved in God. Atheists are capable of self-sacrifice. But it’s not a question of believing in God but of the existence of God. That is to say ethics is deontological. Ethics derives from being. And this ethics-from-being derives from God’s being. Without God there is no possibility of goodness. For all goodness and the moral law originate in God alone.

The modern interpretation of Law not as obedience but only as a means to hedonistic ends results in the depraved notion of universal human rights: depraved because illogical and incoherent. For if I have a right to behave in such and such a way, it automatically implies that someone else has the responsibility to guarantee me that right. Contradictions are bound to arise. I claim a right to peace and quiet, but my neighbour Mr Kakkophonous infests the atmosphere with intrusive rock music on the grounds that to forbid him would deny him the right of freedom of expression. More seriously, there is the scandal of foreigners living here and convicted of heinous crime but who may not be deported, because to deport them would deny them the right to a family life. This is happening even as I write: many officially described as ‘dangerous foreign criminals’ are avoiding the authorities’ attempts to deport them. But there are no rights in wrongs. That is, if you commit a serious crime, you should expect to forfeit some of the good things that come from living a law-abiding life. And in the days when our courts knew the difference between right and wrong, those convicted of serious crime did lose their freedom. The doctrine of universal human rights is itself an immoral doctrine. And it can never be an ethical principle but only a wish list – an impossible cloud cuckoo land.

The ideas of justice and judgement meant that everyone should get what he deserved. This produced an intellectual and moral crisis which only the coming of Christianity could resolve. For the question arises: Do you really want to get what you deserve? I certainly hope I don’t get what I deserve! I am only too conscious of the fact that I so regularly leave undone the things I ought to have done and do the things I ought not to have done. I fall short – just like you. In biblical language, I am a sinner. And, if I am to be saved from myself, I need more than the Law – which I cannot always keep. I require mercy.

But mercy is bought at a price. Not even God can say, ‘Ok, I’ll simply let you off.’That would abrogate his eternal Law. So how can we uphold the integrity of the Law and at the same time guarantee the salvation of sinners like you and me: sinners in fact like all humankind? The first person to address this problem was St Paul, some eighteen years after the Crucifixion and resurrection of Christ. Paul wrote:

‘The sting of death is sin; and the strength of sin is the Law. But thanks be to God which giveth us the victory through Our Lord Jesus Christ.’ St Paul says also: ‘God commendeth his love toward us that, while we were yet sinners, Christ died for us.’

The amazing thing is that, all those centuries before the Crucifixion, Isaiah saw in precise detail what God would do to save us:

‘He is led as a lamb to the slaughter. Surely he hath borne our griefs and carried our sorrows: yet we did esteem him stricken, smitten of God and afflicted. But he was wounded for our transgressions, he was bruised for our iniquities: the chastisement of our peace was upon him; and with his stripes we are healed.’

These words are no coincidence. We are not being merely fanciful here. Isaiah foresees the death of Christ in exact detail – even to predicting the emergence of the thieves on the crosses and of Joseph of Arimathea:

‘He was taken from prison and from judgement . . . he made his grave with the wicked and with the rich in his death . . .’

But one enormous problem remains. If God punishes the sinless Christ in order to save sinful men and women, surely he abrogates his own immutable Law of justice? It cannot be right to punish the innocent for the sins of the guilty. The miracle is that there is no fracture of the Law of justice. Because Christ is none other than God. Again, as St Paul puts it:

‘God was in Christ, reconciling the world to himself.’

When you contemplate the mystery of our redemption, deep matters give way to even greater depths. For consider this: when God made all things, he also made time. God himself is outside and beyond time. This means that, before the heavens and the earth were brought forth, God knew from everlasting that his act of creation would involve his own ultimate sacrifice. There was the knowledge of Calvary in the mind of God ‘before’ the foundation of the universe.

The miracle of the Divine compassion, of God’s extreme tenderness and love towards us, is that he went ahead anyway. He thought we were worth it.