NewsPaperthe art of publishing
HomeNewsJane Kelly: After the Bataclan fear is not a crime and tolerance...
59

Jane Kelly: After the Bataclan fear is not a crime and tolerance not enough 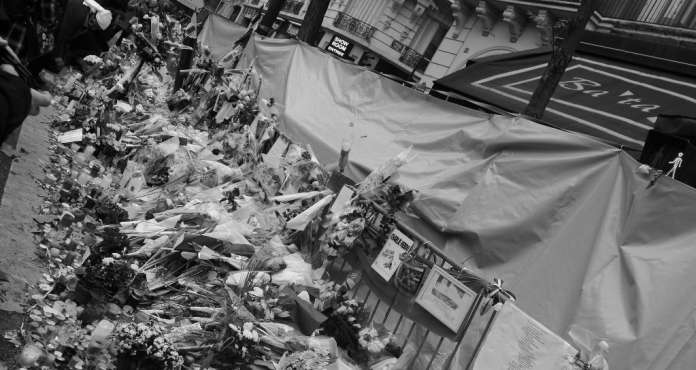 As we all know, the Bataclan music venue in Paris reopened this weekend with a somewhat melancholic gig by the British singer Sting. It is a year since Jihadi gunmen burst in during a rock concert and proceeded to torture and kill nearly a hundred young people during a series of terrorist attacks in the French capital.

Sting, in simpler times, lead singer of the pop group, Police, appeared on stage to cheers from hundreds of Parisians including the families of victims and survivors, crowded together struggling to comprehend what could have happened on that fateful night, to change their lives forever.

Some bereaved parents spoke to the BBC of their broken heartedness. Some survivors were terrified to go to the Bataclan again and saw the concert as a stage in trying to get back into normal life. But other messages came through, at least from BBC News reports. They usually ended with talk of the future; reconciliation and in particular placed fear against tolerance.

Apparently the two are directly connected, and tolerance is the opposite of fear. There has been a change of definition somewhere because the last time I looked, tolerance was something one acquired throughout life, the mark of a mature adult able to live successfully with neighbours and the wider community. Fear is something which can be irrational but is usually caused by a direct threat.

But people are now being accused of bearing fear, as if it is a new crime. Anxiety likely to be felt by ordinary people going about their ordinary lives, getting on buses, underground trains, walking to work or going to rock venues, is now regarded by the liberal elite as a vice, and a bad one, teetering towards racism.

In the 1980s, after being mugged by three Afro-Caribbean youths near my flat in Angel Town near Brixton, I was accused of provoking that attack by being guilty of ‘racist body language.’ A flavour of that nonsense has returned with Islamic aggression.

In my experience fear is a strange, unpredictable thing. Under threat a flight mechanism caused by adrenalin should kick in. That doesn’t always happen, sadly. On the two occasions I was attacked in the street near Brixton, I found it almost impossible to run. My feet seemed to turn to lead beneath me. I seemed to be moving slowly as if in a dream. Years later, held up at a road block in the Congo, with a gun pressed to my head, my top half felt calm and I tried to breathe evenly, I could hear myself doing it, but my legs turned weak as water and standing up became very difficult.

The problem is fear when it comes, sweeps over you like an unexpected giant wave. You can float to safety or, if you are lucky, swim away. Either way if it happens, it is not your fault, or not until recently.

What the pundits who juxtapose fear against tolerance are really saying is; ‘Your fears are irrational and futile, founded in ignorance of the benefits of having Islam and other minorities in Europe. You are not educated enough to rise above your unease to embrace globalisation.’

From there it is a short step to, ‘Your fear represents an attack on Muslims and other minorities who choose not to embrace modernity whilst living in modern societies. I do not share these fears because I am a believer in relativist values, a sophisticated citizen of the world.’

The liberal elite, who despise the apparent cowardice of the working class, clinging to the idea of the nation state, in the face of often quite shattering economic and social change, of course, have their own fears, which may be equally based in fantasy. These often centre around a threat they perceive rather exotically from the KKK, the great white foe of the American civil rights era, and the white ‘Okie from Muskogee,’ middle American farmer. That is another image from the 1960s, which so terrified and disgusted American hippies in their rejection of the all American conventional lifestyle. The villains who brutally murdered the free-wheeling heroes at the end of the cult film, Easy Rider.

Last week, on November 11th, Matt Frei (Arbeit Matt Frei to his friends) on Channel 4 News told a group of veiled Muslim women in Washington that they could all surely agree that the greatest threat of violence in the US came from white men bearing arms. They all did agree, nodding vigorously. On the same day the Today programme on Radio 4 opined that France had wasted a billion euros on security since the attack on Bataclan, when they would have done better to spend it on making Muslims in France feel more comfortable.

That view was adumbrated later in the day on R4, in a programme called ‘The French Culture War,’ by Nick Fraser. His trailer for the programme promised to explore, ‘the misuse of secular ideals,’ in France, a secular country. He ended by telling us that violence and fear will surely subside if France will only, ‘do more to accommodate Muslims.’

For Frei and Fraser, tolerance is the key, the solution to solving the problem, not of migrant groups’ desire for separation and refusal to integrate, but to the irrational fears of some lower-class folk who resent and worry about their presence in such large numbers.

I do remember some really wise words from Dr Martin Luther King about fear. After living with death threats, he once wrote: ‘Fear knocked, Faith opened, there was no one there.’

Sadly Dr King lived in another age. We now live in a post-Christian age where most people’s faith has never been inculcated or has drained away. The passionately faith-filled believers pouring into Europe are often the most threatening and fearsome people. Western post-Christians who do not embrace relativism or globalisation, often lacking a faith or firm identity of their own, have no weapons with which to oppose them, now even being denied basic self-expression.