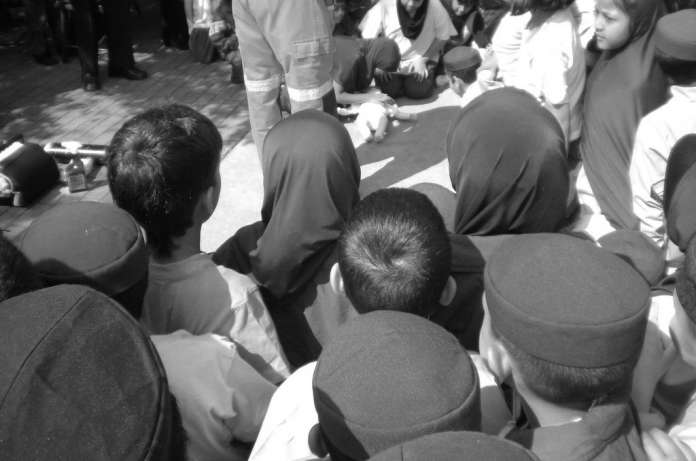 There was a tiny feature squeezed up the end of the Today Programme on Tuesday, not given any space, but it managed to be riveting by giving a terrible glimpse into the education now on offer in some of our schools.

The question being asked was one which would drive most intelligent youngsters wild with rage, ‘How can we tell children and young teenagers about terrorism?’

It assumed in the modern, patronising, overly anxious way, that young people have to be strongly guided in their thinking by careful adults. The girls interviewed were all from the Elizabeth Garrett Anderson School in north London, and the language used by the BBC was immediately tortuous and very strange to the ear of anyone outside the pious, well-meaning metropolitan elite.

The reporter told us that the girls in the school were most often veiled Muslims, ‘usually from an ethnic minority,’ this precludes any stereotyped view we might have, which would assume that niqab wearing girls naturally came from an ethnic minority. Of course as bien pensants we wouldn’t hold that view, but think that women wearing the veil was quite normal for British people.

But they sounded extremely confident. One fourteen-year-old from Somalia assured us that the onus was not on them, as Muslims, to take responsibility for Islamist attacks, but for the wider white community to reject any guilt by association. There was no sense that Britain was a host country, deserving some respect.

Then came the staff, led by Juliet Henry, ‘Head of Citizenship,’ in the school. ‘The key is to reflect true Islam,’ she told us, leaving some of us wondering how she was doing that, when Islam is now in turmoil, riven by factions with some trying to bring about Armageddon while others want a Reformation.

She wants girls to discuss events without being ‘fed a narrative,’ a code for not being told anything from a mainstream British view. None of the girls interviewed would give their names, suggesting a mistrust either of the press or of speaking as an individual. There was a strong distrust for anything reported by the British media.

‘If they hear it on the media,’ said one girl, ‘they might think that same thing.’

In the interest of balance I suppose, the Today reporter asked if the emphasis on  finding ‘true Islam,’ wouldn’t mean, ‘forcing’ Islam on girls in the school who were atheists?

Perhaps she was asking that question sincerely but one wonders just how many atheists are pottering around that girls’ school which is almost totally Muslim. Fatuous questions aside, Ms Henry pressed on telling us that ‘religion,’ she didn’t say Islam, ‘has been corrupted by other groups, this would be overcome by ‘education,’ and of course the main problem to be tackled by education was, yes, you’ve probably guessed it, ‘Islamaphobia.’

Like 9/11 and 7/7 the Paris attacks have been bad for Muslims. The school doesn’t want the girls to feel guilt about the murders, they are after all now victims of ‘Islamaphobia,’ and because of that the school staff decided not to have a minute’s silence or honour the French dead.

The BBC reporter did not question this with anyone at the school but Ms Henry explained that any commemoration of those dead and wounded French teenagers would have been ‘disrespectful to many of the girls who believe that all attacks around the world deserve attention, not just those in the western world.’

It was unpleasant to hear this report and get a small, sharp slice of the extreme left wing thinking served up to these girls every day in an Islington school by British teachers. As most of the girls in the school are Bangladeshi Muslims with English as a second language, it is hardly likely that white British people will send their daughters there, but if one adventurous middle class parent, dedicated to multiculturalism was determined to do it but wanted to complain to the head teacher about the slant of the education given, it might be difficult.

There is a Ms Jo Dibb but she is ‘Executive Head Teacher.’ Perhaps that is the equivalent of a Head Mistress, but it is not clear, and fully embracing the collective principle there are no less than six other head teachers in the Elizabeth Garrett school, plus a ‘Business Manager,’ and five ‘Heads of Year,’ only one with a British name.

Take your pick, but I suspect any doubts or queries about giving an Islamic education in a British state school would quickly be dismissed. The teachers in this school are obviously happy that before they are old enough to go to university and really make up their own minds, 900 supposedly British children are being denied a western view of world politics in favour of what is essentially a pan-Islamic view of life, from inside what they would see as the Ummah, the Islamic, and only world allowed. The Ummah is defined online as: an Arabic word meaning “nation” or “community”. It is distinguished from Sha’b (Arabic: شعب‎) which means a nation with common ancestry or geography. Thus, it can be said to be a supranational community with a common history.

This is a school which appears to be run for people who wish to live in the UK while remaining obdurately foreign, and who are likely to spend their lives in a mental, if not a physical ghetto.