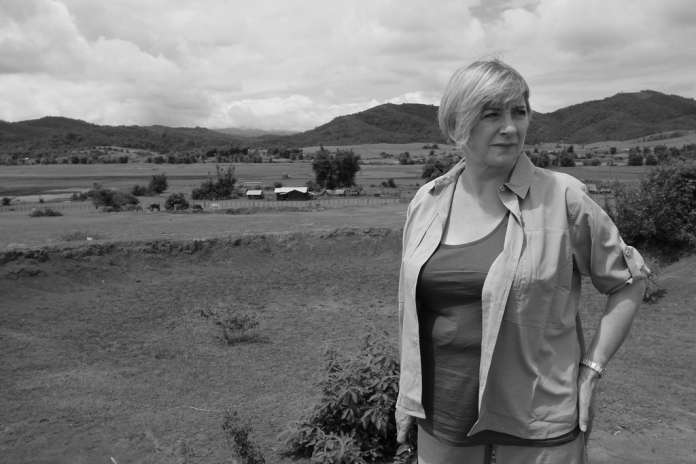 It was more than sad to hear of the untimely death of comedian Victoria Wood, for many of us roughly her age, she made us laugh throughout our adult lives, and there might have been more to come. As most commentators say she was a special woman: humorous, often bleakly funny, not a great one for irony but she made huge sport from the absurdity of English life.

She was constantly parodying women. The last clip from one of her shows I heard, after her death was announced, featured a northern woman, probably played by Anne Reid, one of her team of talented funny females  she gathered around her, blathering on about her horror of prawns. ‘They hang around sewage outlets, treading water with their mouths open you know,’ an amazing image, absurd and hilarious almost lost in a stream of surreal stress.

Wood was certainly ‘special’ because her gene of original comedy is present in so few women. Getting a simple joke into them is hard and often causes disapproval. Perhaps there is more fun to be had in the north, but where I live, in a small market town in the south east, many of the women I meet rarely crack a smile unless it’s to sneer at Michael Gove.

Unlike most of Victoria’s subjects, they are middle class, privileged, from good schools, but they seem just as dim and batty as the women she caricatured so warmly. As one reaches late middle age and men die off, I find I live surrounded by what a female boss of mine used to term ‘silly women.’

They are silly but not funny. In the crowded swimming pool, things are often made worse by a woman jogging up and down the lane. As most swimming pools no longer have a deep end, for reasons of H&S, they can easily get in everyone’s way doing this. I’ve recently moved to a university pool where there is still, daringly, a six foot end. There is a woman who tricycles along with her legs, while holding her hands above the water in some kind of Yoga pose. She can’t hold that for too long so she does widths, while everyone else is going for lengths. I have never seen a man go in for this aquatic nonsense. They just get on with swimming.

Most of the ladies Wood  lampooned were northern, mumsy types, the sort she perfected in the TV series, Dinner Ladies, which got away with such a non-pc title. Where I go sometimes for tea, a local cafe with homemade carrot cake, the customers were mostly teenagers in the 1960s when they embraced feminism and the Bohemian, hippy ethos.I went with a friend who spotted someone she knew well from a further education course, a local potter sporting a garish silk hat. She seemed typical of the strong, rather refined pensioners I meet, their men long gone, bursting with creativity. But their main concerns seem have been medicalised. Many of them have skeletal problems, perhaps from past anorexia which was so fashionable in the 1970s.

Within a few moments of sitting down they were off; ‘I’m gluten free of course.’ ‘Really? Oh I don’t take gluten or dairy.’ ‘Well I’m giving up dairy soon. I only have nut milk. I don’t eat much meat you know. Giving up meat has almost stopped my IBS (irritable bowel syndrome).’ ‘ I have diverticulitis and I know someone who swears by dulse. She gets it imported from Ireland. That cake looks good.’ ‘Oh I never eat cake as it contains SUGAR.’ ‘Sugar?’ ‘Yes, it’s well known that sugar causes cancer,’ etc etc. I put my jacket on at the first mention of the word Dairy. When they got to IBS I shot out of the cafe as if I’d remembered that I’d left my tofu under the grill. If I’d stayed I know they would have got on to their forthcoming tests for coeliac disease and my day would have been ruined.

I’ve made a resolution, as I approach my 60th year, never to listen to those conversations again, but they will be extremely hard to avoid. Perhaps I should get some of  Wood’s old sketches streamed onto an iPhone and whenever I am with a group of women, stick in my earplugs. They wouldn’t notice as they talk so intently about their ailments and disease prevention.

Victoria Wood had a sense of humour; she saw the joke in humbug and fads and created joyous fun. The women she found funny, from a sad school-girl hoping to swim the Channel to the broken down Mrs Overall, were harmless. But my discontent stems from my presentiment that the new ethos of puritanism with all its grabby specialist interest groups emanates mainly from women.

It was unlaughable to hear BBC Woman’s Hour, the most humourless programme on radio discussing Wood’s achievements the day after her death was announced. There is more fun at the average Ulster Unionist meeting than with Jenni Murray and her BBC crew. Although Murray did once disagree with a woman who was demanding that the radio comedy, I’m Sorry I Haven’t A Clue should be banned as it was sexist. A show which Wood appeared in to great effect several times, her wit and intelligence holding up well against the usually all male panel.

It seems as if the woman who disapproved of it and her kind have won though, as it has now disappeared from the network. Gone are the days when a kindly, sensible woman secretary would keep her pompous, bullying boss in check. Or iron clad matrons of the type depicted by Hattie Jacques in Carry On Doctor could intimidate consultants and doctors, whilst keeping their own dark  jaded humour just in view. Few who saw it can forget Hattie’s face as she uttered those perfectly sardonic words: ‘Yes, Colonel, but never with a daffodil.’

Women, proliferating in the professions are now the pompous, humourless bullies themselves. Worse than men, because of their essential tidiness, love of order and inability to see the absurd. From the 1960s onwards feminists promised a brave new world when women gained more power. It hasn’t happened of course and their cry is now for a duller world with less risk.

I am reminded that it was a solid block of educated women, the ‘beamte’ who became office workers and civil servants in Germany for the first time after the Great War, who voted most loyally for Hitler. With his demand for order, regulation and efficiency he was just the ticket for many women, quite untroubled that he not only lacked irony himself but locked away and killed people who made jokes, from the smallest night-club entertainer a to a lawyer who mocked him in court. He was also obsessed with his diet and  bowels.