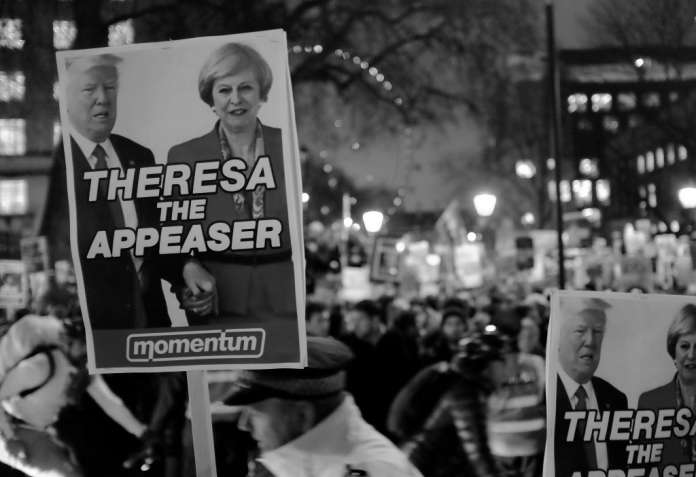 It seems that we are now living in the first ever Age of Untruth. This is not about bad people telling  lies and hoping to get away with it, or  even  politicians, such as the SNP lying about export figures, but a state where fibs are considered to be a perfectly acceptable substitute for truth. The king of this new way of doing things is the new American president, who began his tenure by claiming that millions of people had turned up to see him crowned, when photos clearly showed the opposite. He had to protect his ego and we had to empathise.

This is nothing to do with ‘Newspeak’, the dark Orwellian nightmare where people are force fed lies from a cruel dictator. For the liberal Left it’s all about populism which says never mind the facts let’s get on with destroying the ruling elite, i.e. them. The new fibocracy is happily accepted by a gullible public. Porkie pies have always been popular entertainment. The difference now is surely the number of people, after years of free state education, who are unable to distinguish fact from fiction whether it’s conspiracy theories or presidential pique.

But this should really be no great surprise to anyone, as for the last seventy years philosophers and educationalists in the US and Europe have been telling us that facts, historic facts in particular, are worthless junk. Only the present exists, without relation to past or future.

In the UK, post-history and post-truth, unlike previous generations, we accept that most state-educated people live unburdened by useless knowledge about the past. For years now we’ve been telling children to value emotion rather than hard facts, which are only culturally relative.

I studied history for A Level. In those distant school days the history teacher still held a file of notes full of facts provided by leading historians who knew all about the Glorious Revolution, the Thirty Years War, the Treaty of Westphalia and the illustrious if misguided life of Louis XIV. He fed these to us before inventing fiendishly difficult essay questions out of them.

I’d only done CSE, which was very vague, avoiding facts in favour of broad outlines. I found my new sixth form friends who’d taken an O level knew all about Bismarck, who the Hohenzollerns were, understood words like, ‘hegemony,’ and knew how to write detailed essays, which I didn’t.

I got to grips with the essays and went on to study history at university, but crazily chose a new, radical institution where history was a form of economics based around a core course entitled: ‘Economic Imperialism and the Third World.’ This meant reading reams of economic theory, which all concluded that history was nothing more than a struggle for resources between the rich and the undeveloped world.

Our ‘facts’ were about surpluses of manioc, coffee beans, copper and oil. These were manipulated in the interests of the Revolution which was on its way. Meanwhile the post-modern philosophers of Paris had instructed my tutors in English Lit that the context of an author’s life was irrelevant because all that matters is the language on the page. As a lover of biography that hurt, but worse was hearing that there are no juicy historical facts only bourgeois propaganda. In the mid-1980s as the CSE culture (in the guise of the GCSE) replaced the O Level, the teaching of history was largely abolished on the grounds that facts were ‘cultural capital,’ dangerous weapons in the class war.

Working teachers have told me quite emphatically that there are no such things as facts. History is written by the victors. Interest in the British past is nostalgia for imperialism and dangerously close to racism.

According to the new orthodoxy, learning historical facts, about the Great War, for instance, was no good to children because the most important thing they could do was ‘empathise.’ They are required to do this without understanding why a situation had come about. Why? replaced by, ‘How do you feel?’

In schools, Europe before 1914 disappeared replaced with Henry VIII’s wives and sketchy ideas about the Nazis. The point being that the wives were victims and the Nazis were bad, and not to turn out that way yourself. ‘A Warning from History,’ that singularly failed to register as anti-Semitism and Holocaust denial, has become an online industry, mostly among the young.

The combination of ignorance and empathy intended to save the young from making the wrong political choices has also failed. The Institute of Education must be in grief, as after years of left-wing teaching we’ve ended up with populism and Jew bashing. The retreat from rigorous teaching in the US and the UK has coincided with the growth of social media and we no longer have a  public with a hinterland of knowledge allowing them to sift between truth and lies.

We now have the logical conclusion to this intellectual vacuum; an American president who believes there is such a thing as ‘alternative facts,’ available for the defence of his ego.

The current situation was summed up last week by Richard Rampton QC, who represented Deborah Lipstadt in the Irving Trial.

Share
Facebook
Twitter
WhatsApp
Email
Previous articleLaura Perrins: If we are racists why are we so popular?
Next articleDr Campbell Campbell-Jack: Trump has got the progressive Left literally foaming at the mouth