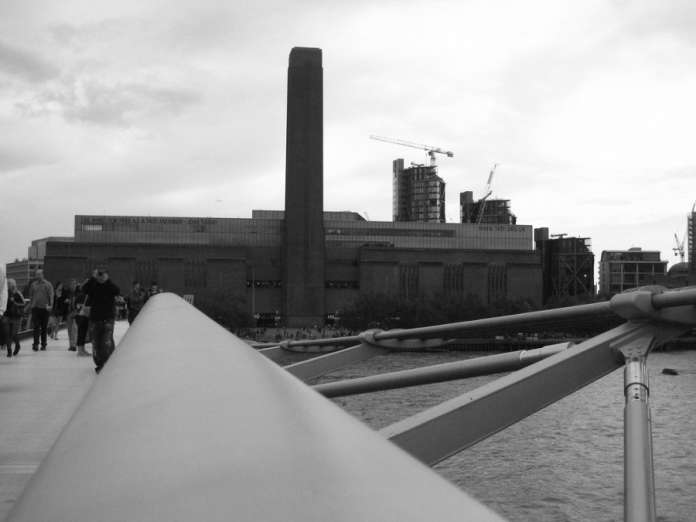 On June 17th Tate Modern at Bankside, London, opened a new building to further transform Gilbert Scott’s power station. Its publicity says it offers, ‘dazzling new galleries, the return of subterranean Tanks,’ and most importantly, ‘welcoming public spaces.’  As opposed to those older galleries where the public were menaced and scorned if they tried to enter.

The opening began with a weekend of ‘discovery and celebration.’ In the original building, with its vast escalators, that would be finding the loo and celebrating if there was no extensive queue. This new edifice, The Switch House, is also going to involve a lot of ‘discovery’, as it’s on three levels and preserves gigantic non-human scale.

The new, all welcoming Tate Modern is all about diversity showing work from over fifty countries. Children are very much connected to this ideology of inclusiveness. Like the CoE the idea is to get them in, as many as possible and not to do or say anything which might scare them off, i.e. nothing formal or requiring effort.

Before the grand opening, the gallery threw open its doors, (you have to be careful about these. A new work consists of a seemingly never-ending hall of life-size mirror doors which people can walk through on a road to nowhere) to 3,000 schoolchildren from the UK. As the brochure put it, ‘many will not have visited a large art gallery before.’ Underlying ignorance is always assumed with relish. Under the ironic heading, ‘First Day of School,’ a photo shows a crowd of children, mostly black, racing through the Tate Turbine Hall towards the photographer, mouths wide open as if all screaming in unison. As a child I do not remember anyone being encouraged to dash through a gallery or museum screaming their head off. As in libraries, silence and quiet contemplation were required. I couldn’t help thinking that if I was a black parent I would have been dismayed and annoyed by that picture.

‘The Kids Are Alright’ sang the Who in 1965. ‘We don’t need no education,’ sang Pink Floyd in 1979 picking up the continuing zeitgeist. The photo of the distorted faces reminded me of a depressing mural I used to see on the wall of a housing estate in Brixton, showing black boys playing football, looking as if they were savagely attacking each other.

That was in the 1980s when we were beginning to see the results of the English anti-education culture. But there was still a strange, skewed view of children that their natural ‘wildness’ was something to be cherished and encouraged. Perhaps it was a final shout of the Rousseau idea of the ‘noble savage,’ above all it approved the notion that children could not be expected to sit quietly and learn. Although they were thought to have natural genius, nothing intellectual could be required of them.

This view of children and of inclusiveness meant that the cerebral was been removed from public libraries and galleries. The children photographed, and others from Wales who were invited to visit were asked what they expected to find in the new gallery.

‘I expect lots of unusual objects hung from the ceiling.’ Said Dominik. ‘The best bit about art in school is that you can be free and creative and do art in any style you want’, said Aurelia.

‘Lots of technology, maybe animals and people in art,’ said Maddison, not quite getting it that the latter will be nowhere to be seen. She was in the wrong place. None of the twelve children questioned mentioned skill, application, or heaven forbid, talent. This kind of art is public performance, meant to include everyone, at least anyone who enjoys making a racket and  being ‘visually dazzled’  by 3D objects hanging from the ceiling, and sump oil  in tanks.

Tate Modern is a great tourist attraction of course and British art schools make millions every year from foreign students arriving from south East Asia equipped with a traditional art education but eager to make installations. Some of our art colleges trade flagrantly on the past. The Slade was in its heyday in the early 20th century. It sells traditional painting courses to the public, and children struggling to put together a portfolio for A Level, but its degree courses, costing £30,000 a year upwards, offer almost entirely conceptual work.

Some of the colleges produce no work at all; they don’t want to see anything produced as that is ideologically unsound. A friend who recently took a framed painting along to her college in Chelsea was verbally abused. A frame is of course about the ‘politics of ownership,’ and absolutely taboo. Her tutor called her work, ‘shit.’ She was lucky to see him at all though. Students are packed in but teaching staffs are kept tiny.

Corruption in our art schools is just one aspect of our ramshackle, trouble education system. This is one of the great ideological fissures in our culture, as powerful as the immigration debate. People move houses to avoid areas of high immigration but also in the quest to find good schools. The educational policy affecting state schools has fed disastrously into the problem of migration.

‘When do children in England start to learn?’ a bewildered Polish friend once asked me. Her daughter aged eleven was five years ahead of the English children in maths.

Many migrants who come to the UK have been deluded about what they will find here. From the extreme of Damilola Taylor’s parents who in 2000 sent him from a good school in Nigeria to a sink school in south London where he was murdered in a stair well, to east Europeans whose children start to learn rigorously at seven and imbibe a strict work ethic. They can hardly know what they are sacrificing when they bring their children to the UK.

The failure of our education system to equip our children with the ability to sit quietly and study, to listen, to acquire and lay down cultural capital has been a disaster, which now coincides with the arrival from all over the world of people who do have a good basic education, who can learn, conduct themselves like adults and want to work.

Perhaps the saddest voice of the children questioned came from a ‘Demi-Lee’ who said, ‘Art can change the world.’ What does that child know of the world and why is she speaking in clichés about it, instead of sitting quietly, silently somewhere, learning to paint and draw?

Perhaps in the future people will study the 21st century and looking at the decline of European culture and the obliteration of the UK, will see a direct correlation between the abandonment of state education from the 1960s and the mass movement of peoples fifty years later. They will probably think, as we often do when reading history, ‘What fools the English were. Why on earth did they allow that to happen?’