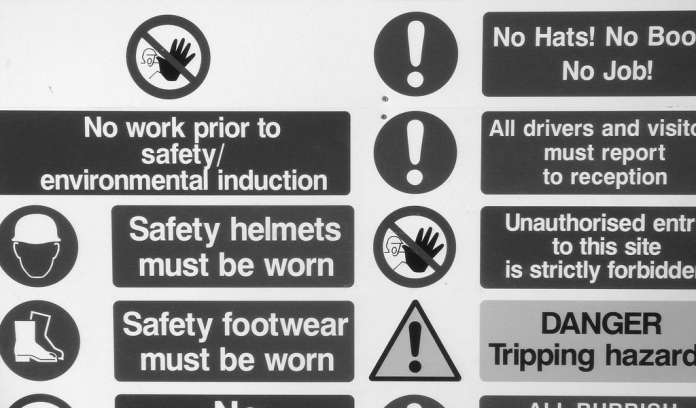 I don’t lead a reckless life these days but I have managed to have a few runs in or perhaps swim ins with the Gods of Health & Safety. I recently got into a swimming pool five minutes before the session started and as a result all swimmers were banned from using the changing room until five minutes before the very short official session started. Worse someone else was seen diving in without permission and the place was threatened with closure. That pool is remarkable in still having a ‘deep end’ let alone diving boards, so it was a dire threat.

I recently bought a gas cooker with a grill which went out if anyone walked past it and was told it had an extra sensitive door for H&S reasons in case I closed it by mistake. I have also been told I can’t paint in the local Botanic Gardens without special permission, for health and safety reasons.

I suppose I might be taken by a particularly strong attack of artistic pessimism and throw a pot of  turps in the face of the public, not that anyone is allowed to use traditional  medium like that anymore. These days you have to buy expensive stuff without a smell. Perhaps my paint might poison some of the plants? Not possible as artists are no longer allowed to use lead paint, the famous Cremnitz white used by L Freud now has to have a special gun attachment, and even cadmium is under threat, although that came from the EU and is now in doubt.

Wild creature that I am, this week I embarked on the dangerous step of trying to get new windows in my attic. It’s not a very tall house, just a cottage really, but there is a small room on the third floor. As soon as you say, ‘third storey’ workmen or window companies frown and become very edgy as if you are demanding the emergency repair of an unsupported chimney in a hurricane.

I got a brave double-glazer to agree to do it but there was a question of whether I would need scaffolding costing at least £900 extra. At one happy point it seems possible that I might not, as part of the roof beyond is fairly flat and there is another one below it, and not much fall from there. If there was a fire I would be happy to get out that way and scramble down, one of the putative panes is going in to allow for that eventuality.

It might have been possible, in the world before H&S took over, that a window could be put in from the inside, without any expensive outside structure. Of course that is laughable. I should have guessed all along that I had to have scaffolding. How could I have hoped otherwise; not only do I present them with an enormous gaping hole but below my window ledge on the inside there is a step about a foot high, built over the stairway below. My double-glazing expert rubbed his chin, very worried when he saw it, so perturbed that I thought he might cancel the job as impossible. From the top of that step to the top of the window ledge is less than the statutory height from floor to ledge, posing a direct threat and requiring scaffolding outside.

‘The men who come to do the job must be told that under no circumstances are they to stand on that step,’ he warned me darkly.

Of course it was obvious; anyone crazed enough to mount and stand on a step to do a job involving reaching above them, as I do when I hang the curtains, would be risking life and limb, automatically defying gravity it is extremely likely they would pitch forward from the step, career over the jutting window ledge, catapulting into mid-air. Once in flight they would be unable to grab the ledge on the other side, despite the screams and helpful lunges of their workmates, they would then pitch downwards, unable to roll slowly or make any attempt to stand on the roof, carry on their fall at increasing velocity, somehow missing the next roof and land on the ground below stone dead or horribly mutilated.

Where would that leave me? Still without double-glazing. The company of course might be sued by his grieving widow and starving children. That, of course, is why I have to pay nearly a thousand pounds extra for a scaffold I don’t necessarily need.

At the moment visiting salesmen and repairmen, called out in despair to explain why things won’t work, always quote mysterious new rules requiring extra expense and inconvenience. One always  assumes they are from the EU. Will this panoply of baffling red-tape decline after Brexit? As with everything else connected with that issue we are not told. We must live in continued suspense, which can’t be good for the heart. Is there anyone we as a nation can sue for that?