NewsPaperthe art of publishing
HomeNewsJane Kelly’s Christmas book choice: A portrait of the artist as a...
0

Jane Kelly’s Christmas book choice: A portrait of the artist as a very strange man 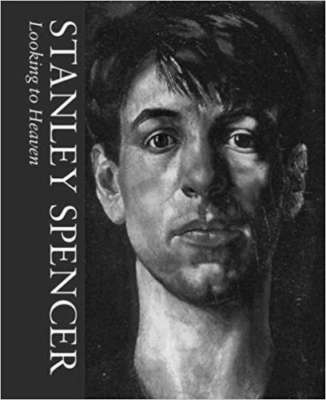 Stanley Spencer, Looking to Heaven (Volume I of III). Unicorn, 2016

‘I think I could have reached all I wanted without going from the kitchen door; it would have suited me to be tied to Ma’s apron strings. Before the 1914-18 war, when I used to push Ma about in a bath chair, I could look at things with the impersonal eyes of an animal . . .’

This paragraph, from the preface to an unwritten autobiography in 1935, takes us into the strange pictorial world of Stanley Spencer, one of our greatest painters and mystics in the uniquely English tradition of William Blake.

Spencer, who died in 1959, made numerous haphazard attempts to write his autobiography, starting in 1915, but never managed to do it. Instead he kept a series of journals, noting things down and sketching the things around him. Those journals are now in the Tate Gallery Archive. This lavish book is the first of a three-volume set of those abridged journals, published for the first time.

Running to over two million words, they are what Lynn Barber in the Sunday Times called a ‘labour of love’ by Spencer’s grandson, John Spencer. Stanley didn’t believe in chronology; like a modern historian he hoped to find ‘correspondences’ through time. He said he didn’t want ‘a tidy book’. In the preface, which begins Volume I, he wrote: ‘In order to make me in this book I need all the ingredients that I know in myself.’

According to John Spencer, this made editing his memoirs almost impossible. ‘My grandfather was both a genius and pain in the neck,’ he wrote, adding: ‘And it’s been wonderful getting to know him!’

His labour allows us all to do that, whisking us right into Stanley’s Victorian childhood in Cookham, Berkshire. ‘The story of my childhood is really the story of how I became an artist,’ he writes.

Even without seeing the development of a singular genius, it’s a fascinating historical document about the world we have lost. Spencer was born in 1891, the eighth of nine bright children. His father was a music teacher and church organist, who taught the children to play the piano and violin. Family life involved walks in the countryside, cribbage, church-going, big Sunday lunches, cycling, rowing on the Thames, constant reading by both parents to their children, and keen ambition.

Stanley’s older brother Will, a piano prodigy, appeared at the Queen’s Hall in London at 14, playing Beethoven’s Emperor Concerto to a packed house. He was sent by the Duke of Westminster to the Royal College of Music. When he won a fullsize grand piano in an open competition he was too shy to tell his parents, who were stunned by its arrival on their humble doorstep.

Another brother, Harold, was a successful violinist and astronomer. He taught music to the aristocracy and astronomy to the two Lowy sisters who became Mrs Victor Gollancz and Mrs Harold Rubinstein. A third, Gilbert, became a successful painter.

From an early age, Stanley made notes and sketches about everything. The volume also contains memories and anecdotes from his siblings, who were often naughty, devious and full of rivalry.

‘Harold remembers being told to feed Stanley. After Mother had left the room he amused himself by trailing the bottle around the legs of a chair watching Stanley crawl after it with his mouth wide open.’

The volume takes us through Stanley and Gilbert’s time studying art at Maidenhead Technical Institute, the Slade School in London, where Stanley was known as ‘Cookham’ because from 1908 to 1912 he went home by train to his mother every evening, into the Great War, which made him a man and a painter.

His Travoys Arriving with Wounded at a Dressing-Station at Smol, Macedonia, September 1916, is one of the greatest war paintings. Now in the Imperial War Museum, it shows an operating table seen from above and outside, looking in from among the mules with their stretchers bearing men contorted in pain. The British War Memorials Committee had asked him to paint a religious service, but he looked back to his own experience and decided to paint instead ‘God in the bare real things, in a limber wagon, in ravines, in fouling mule lines’.

Although he has for some reason dropped out of public view, there was no chance of his lugubrious face ever appearing on the new £10 note while Tracey Emin’s face was of course a contender. The public could be familiar with the astounding work he produced at Sandham Memorial Chapel in Hampshire: 19 large-scale canvases which took six years to complete. They graphically describe the day-to-day routine of war. These journal notes and letters show the thoughts and feelings which spawned that work. He wrote in 1935: ‘I was always glad when the work allowed the free wandering of my thoughts . . . this is why I didn’t mind scrubbing the floors. Every portion of the floors I scrubbed was because of all I contemplated when I did it, a kind of work completed.’

Four chapters covering the war come almost entirely from Spencer’s wartime letters. He was not permitted to write about wartime events so he wrote about books he had read and those he hoped to. His ‘starvation’ for painting and music is a prominent theme. We see something of the way his mind switched between wonder at the consequences of war and life’s precious realities back in beloved Cookham.

Life moves on, even in Spencer’s fixed reality. The next volume will deal with one of his would-be specialities, sex. In the preface to this volume he says he intends to include every aspect of himself and that ‘F****** is often a part of some work I am doing, and the experience is incorporated in my doing the work . . . I love the ungainly, clumsy or thought to be ridiculous positions and happenings that occur in the bedroom and in bed.’

He’s still a virgin when this volume ends in 1918. The next one will explore his weird and wonderful love affairs and the domestic life his daughter Unity recently termed ‘a tragedy’, again illuminated by his own writing.