NewsPaperthe art of publishing
HomeNewsJews stand up to Corbynistas (but will Jeremy bat an eyelid?)
254

Jews stand up to Corbynistas (but will Jeremy bat an eyelid?) 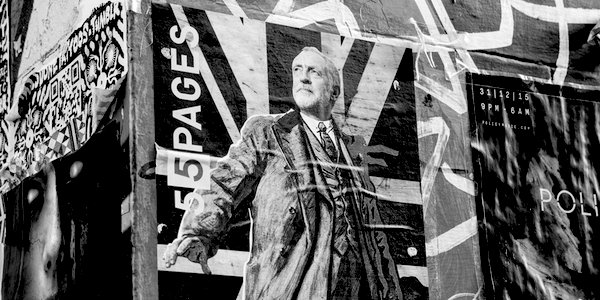 Solidarity but sadness. That was the mood of the remarkable demonstration by Jewish people in Parliament Square this week. Two thousand peaceable folk assembled following revelations that Leader of the Opposition Jeremy Corbyn had joined three Facebook groups containing virulent anti-Semitic comments, and that he had supported a mural depicting greedy Jewish bankers playing Monopoly on a board resting on the backs of slaves.

As an interested observer, on arriving at Westminster I initially found myself in a strategically positioned Jewish Voice Labour counter-demonstration. The Corbyn cultists were there to defend their hero against this Zionist smear facilitated by Right-wing media. The mostly middle-aged group of North London champagne socialists burst into a chorus of ‘Oh, Jeremy Corbyn’, but frankly, it was embarrassingly out of tune with the event; an exercise in denial, with one banner ordering ‘Stop the witch hunt’. Of course, they had a right to be there, and we should always be on guard against censorship when facing political opponents.

Amidst the mass of protesters with ‘Enough is enough’ placards, most were natural Labour supporters, many of whom could not countenance voting for the party in its current guise. They feel disenfranchised. Yvonne, for example, thought that her co-religionists were coming together more in despair than hope, and that nothing will change while Corbyn is in charge. Jeremy is not anti-Semitic, explained Malcolm Pein, who runs a scheme to promote chess in schools. But he has allowed extremists into the party: not all Corbynites are anti-Semitic, but all anti-Semites in the party are Corbynites. Describing himself as a long-term socialist, Malcolm approves of Corbyn’s social policies, but the ascendant authoritarians such as Seumas Milne offend the liberal sensitivities of most Jewish supporters.

Meeting Observer columnist Nick Cohen, I asked whether he would have anticipated such a protest when writing What’s Left ten years ago. No, he replied: this could have occurred only under Corbyn. A young chap, Johnny Pein, defiantly held a large placard with a rewording of the Corbynistas’ slogan ‘For the many, not the Jew’. As he neared the cultists, he was asked why he wasn’t smiling: ‘It’s a joke, isn’t it?’ Meanwhile Harry Markham, a very energetic, trendily dressed Zionist (as declared by his badge) was leading a mixture of Jewish songs interspersed with ‘Oh, Jeremy’s a racist’. Dora, who is active on London Youth Labour Forum, believes that the younger generation of Jews is being deterred from voting for the party. Some may be lost for ever.

The overwhelmed Corbyn apologists were gradually surrounded, but not aggressively. It was all very polite, although a Momentum organiser was determined to oppose the charges made against the great leader. A supporter of terrorism? Not guilty, he argued. But the protesters had a weighty case for prosecution: Hamas, Hezbollah, the IRA, and Corbyn’s latest siding with the Russians on the Salisbury poisoning. Corbyn, in their view, simplistically dichotomises any conflict: one is the oppressor, the other is the victim. Israel and wealthy Jews are always on the wrong side of the equation.

I asked protesters if they felt reassured by the turnout. ‘It shouldn’t have come to this’ was a typical response. They are aghast at the resurgent ogre of anti-Semitism, which ranges from casual remarks to blood-libel conspiracy theorists, Holocaust-deniers and that ugly combination of hard Left and Islamo-Fascists who want Israel wiped off the map. Will this change anything, I wondered? Walking back over Westminster Bridge, I overheard an answer to my question: ‘He won’t bat an eyelid’. After all, there is a voting bloc twelve times larger than the Jews to harvest. As Malcolm said earlier, there are merely three seats in London for Labour to worry about. It should be a terrifying prospect that Corbyn, still in reach of power, doesn’t seem to care.