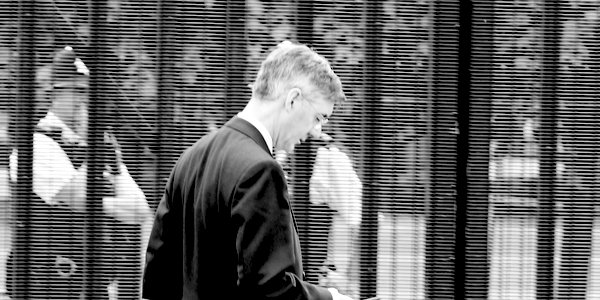 Mogg's treatment of TROPHY NANNY will bring him down – LIVE FROMTHE HEART OF WESTMINSTER ON TUESDAY – THE QUESTIONS MOGG MUST ANSWER
SEE CLASS WAR'S 'NANNYGATE' PERFORMED OUTSIDE MOGG MANSION pic.twitter.com/9SXy6JbJyP

Filmed alongside what appeared to be two mannequins dressed as officers of the Metropolitan Police, this contemporary Abraham Lincoln helpfully informed the Rees-Mogg children: ‘Lots of people don’t like your daddy . . . he’s probably not told you about that. Lots of people hate him.’

In fact, their daddy was fresh from a different antagonistic encounter: that very morning, Rees-Mogg had been publicly harangued by another class-obsessed Left-wing relic, the Daily Mirror’s associate editor Kevin Maguire.

They had appeared on Jeremy Vine’s Channel 5 show with another guest, novelist Amanda Prowse. The host introduced Rees-Mogg as ‘king of the Tory rebels’ and quipped that Maguire, despite being seated to Vine’s extreme left, was ‘not the far left’, although Kev’s subsequent invective suggested otherwise.

For those so inclined, the full episode can be viewed here. JRM appears throughout the first hour.

His characteristic wit and charm was well received by most of the studio audience. As for the contribution by Maguire . . . well, we need to talk about Kevin.

Before Kev began to curl his lip, Vine had conducted a curious interview, an inordinate amount of which he spent contending that Rees-Mogg’s religious and social conservatism is incompatible with his support for a serial adulterer, Boris Johnson, being a future leader and prime minister.

‘Judge not, that ye not be judged,’ was Mogg’s justification, ‘it’s not for me to judge other people’s lives . . . it’s wrong to be as judgmental as you’re asking me to be.’

"It's not for me to judge other people's private lives."

Tory MP Jacob Rees-Mogg – who opposes abortion even when a woman has been raped – refuses to pass judgement on the adultery allegations surrounding Boris Johnson.@TheJeremyVine | #jeremyvine pic.twitter.com/nvdEE3Kaq5

Predictably, though, this prompted Amanda Prowse to complain that, by opposing abortion, JRM is already being judgmental: ‘I’m sure I speak for many women who cannot tell you the fury they feel at that view you hold.’

"I’m sure I speak for many women who cannot tell you the fury they feel at that view that you hold."

Amanda Prowse challenges Jacob Rees-Mogg on his refusal to judge Boris Johnson when he holds such Christian views on abortion.@MrsAmandaProwse | @TheJeremyVine pic.twitter.com/pGBwZzmIwH

Leaving aside the fact that a significant minority of women (and men) agree with his position, there is no rationality for these repeated interrogations: Rees-Mogg readily accepts that his is a minority view and therefore has no intention of trying to outlaw abortion; indeed, he is not even a conspicuous campaigner, and it is not as though he attends Pro-Life vigils.

Nor does he criticise others’ personal morality or seek to impose his own: he simply and straightforwardly states his own views whenever asked. One therefore must conclude that the subject arises ad nauseam only because the liberal media is determined to reinforce its portrayal of Jacob Rees-Mogg as a dangerous fundamentalist.

This caricature enabled Kevin Maguire to carp: ‘You have a very strong view on abortion and marriage. One of [Boris Johnson’s] mistresses had an abortion – you just wipe it clean for him, you sponge it out. What makes him so special – do you Old Etonians just stick together all the time?’

Kev’s barb about public school education was his warm-up for a segment titled ‘Too posh to rule?’ By happy coincidence, the landed Jacob Rees-Mogg was on hand to be quizzed on whether this is true of him.

Mogg explained that his most valuable political education came when he unsuccessfully campaigned as a parliamentary candidate in Fife, the part of the UK which last returned a Communist MP (Willie Gallacher 1935-1950). He also lauded the ‘greatest part of the system in this country, the constituency surgery’: ‘Week after week people come to see me whose lives are much harder than mine.’

It was when he averred that it was his duty to be the ‘champion’ of such constituents that Kevin Maguire fully morphed into Dave Spart: ‘Do you feel guilty you’ve made their lives harder? You had a very lucky throw of the DNA dice . . . born into privilege . . . made millions as a City slicker . . . as a lawmaker, a MP in parliament, you’ve reduced tax credits . . . made the welfare state harder . . . starved the NHS of funds . . . introduced the “bedroom tax” . . . taken away job rights . . . had a go at the pension and pay of nurses, teachers, police officers and firefighters . . . do you feel any guilt about that, or do you think that is a cost for them to bear?’

"Do you feel guilty you made their lives harsher?"

Told that his was an ‘analysis of cloud cuckoo land’, misery Maguire badgered: ‘Did you introduce the “bedroom tax”, yes or no? The answer’s yes. Face up to it, you did.’

‘Not far Left,’ did Jeremy Vine joke? For chippy Kev, evidently no amount of public spending is ever enough, nor can any benefit be sufficiently generous. Only in Leftist La-La Land is a benefit restriction deemed to be a tax.

Describing the change to the ‘spare room subsidy’ as a ‘very well calibrated policy’, JRM insisted: ‘The issue I have is people coming to see me who are squeezed into the [social] housing they are in, and [other] people have a spare room they don’t need . . . only fair that it’s the people who are squeezed in who are helped.’

When Jacob departed after the first hour, Vine told him: ‘We have had a lot of messages saying people want you to be prime minister (“Mother has been busy on the telephone this morning,” quipped Mogg, to the audience’s amusement). You’ve obviously come through the test of this show very well.’

Later that day, when spiteful Ian Bone appeared outside the Rees-Mogg home, some criticised Jacob for not immediately ushering his children indoors; in fact, by staying put and even bringing out Nanny Crook (50 years with the family so far), he ably demonstrated to his offspring the importance of not being intimidated, especially on one’s own doorstep.

To continue his children’s education, Jacob also should warn them that it is not only on the streets where truculent adversaries are found: as was evident on C5’s Jeremy Vine show, a national journalist in a television studio can also prove to be a hostile class warrior.