NewsPaperthe art of publishing
HomeNewsJust when you thought the world couldn’t get any curiouser . ....
108

Just when you thought the world couldn’t get any curiouser . . . 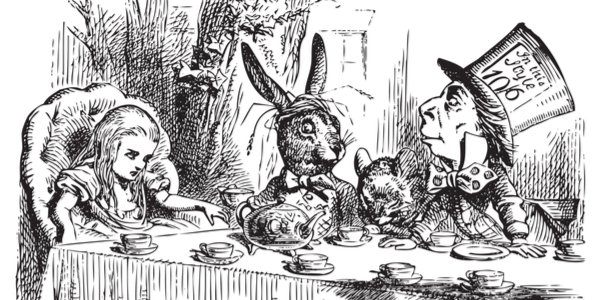 ‘Do you mean you can find out the answer to it?’ said the March Hare.

‘Then you should say what you mean,’ the March Hare went on.

‘You might just as well say,’ added the Dormouse, ‘that “I breathe when I sleep” is the same thing as “I sleep when I breathe”!’

Alice found that in Wonderland things almost made sense but not quite. It was a tiring, fractious place. When she played croquet, the balls were live hedgehogs which tended to wander off. Players all played at once, without waiting for turns, fighting for the hedgehogs. All the time on the side-lines, the Queen was threatening to execute people.

The confusion, fear and rejection of basic logic made it hard for Alice to keep up and she became extremely bemused and bad-tempered. Listening to the news in the morning is increasingly like being pitched down a rabbit-hole into a world that no longer makes any sense.

Last week it was reported that two volunteer lifeboatmen – remember those doughty seagoing national heroes? – had been sacked. The men at the Whitby station in North Yorkshire exchanged jokey Christmas gifts of mugs adorned with pictures of naked women, one with a male crew member’s face superimposed.

A female superior at the Royal National Lifeboat Institution cried ‘Off with their heads!’ when she found the mugs in a cupboard. Joe Winspear and Ben Laws were dismissed. Navigator Steve Boocock, helmsman Martyn Cairns and trainees Neil Cook and Simon Rhodes walked out in protest.

A lifeboat person who had to remain anonymous for fear of getting the chop too said: ‘The mugs were just banter, a bit of fun. One of the sacked men served 15 years. He’s saved people’s lives and recovered those who were not so lucky. He should be given a medal, not his marching orders.

‘Two of the crew are women and told the managers that they were not offended. It’s overkill by the RNLI.’

Initially, Winspear and Laws were told that if the mugs were destroyed they would face no further action. But in March, when not just hares go mad, bosses told them they had breached safeguarding protocol as the mugs in the cupboard might have been seen by visiting schoolchildren. Both volunteers were dismissed in a phone call.

The RNLI told the Sun: ‘The investigation focused on the production of inappropriate material of a sexual nature and social media activity directed at an RNLI staff member. This was not a trivial matter.’

In Wonderland nothing is trivial and looking at tarts rather than stealing them is now as good as a capital offence.

The next bit of news from through the looking glass featured people changed beyond recognition, not made tiny or extra-large from eating mushrooms or cakes labelled ‘Eat Me’, but changing from men to women, regardless of their chromosomes, by a simple act of will.

Last September at Speakers’ Corner in Hyde Park, where people, mainly tourists, used to enjoy an emblematic display of free speech, Tara Wolf, 26, a man who now identifies as a woman, punched feminist Maria MacLachlan, 61, causing her to drop her £120 camera which smashed.

At Hendon magistrates’ court last month, MacLachlan was warned by District Judge Kenneth Grant to refer to her attacker as ‘she’, raising questions about his impartiality. Later MacLachlan said: ‘The judge interrupted my recounting of my assault by three violent males, and told me that “as a matter of courtesy” I should refer to the one in the dock as “she”.’

After finding Wolf guilty of assault by beating, Mr Grant ordered the pretty blonde man in a woman’s hat to pay a fine of £150 plus £30 to his victim to help with the cost of the camera and prosecution costs of £250.

‘No, no!’ said the Queen. ‘Sentence first – verdict afterwards.’

Does this mean that from now on an adult man can attack a woman in her sixties and plead that he is also a woman and so get a lighter sentence? Will we have men dressed as women attacking genuine women with impunity? Will heterosexual men who attack transgender men be accused of attacking women?

At the end of the case, Dr Julia Long, who gave evidence for MacLachlan, shouted: ‘The man is guilty. Guilty of male violence!’

She was lucky not to be arrested, but the new Gender Recognition Act making it illegal to criticise men who ‘self-declare’ as female without any medical tests, hasn’t yet become law. It’s still under consultation, passionately supported by Jeremy Corbyn and the Tory government.

‘Off with her head!’ the Queen shouted. But Alice was safe as the whole court around her suddenly turned into a pack of cards which flew into the air. It had all just been a bad dream on a hot day. Lucky Alice! For the rest of us there is no waking up from this strange new world and its proliferating nonsense.