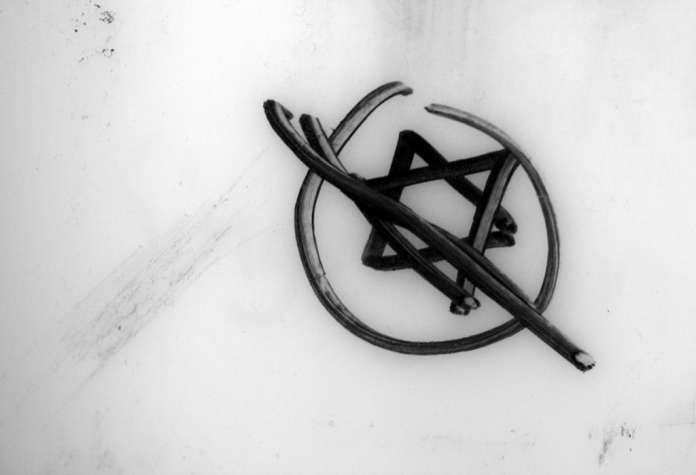 As a Jew I refuse to be a victim. My people were proud warriors in biblical times and since the establishment of the state of Israel we are warriors yet again. We no longer held hostage by insidious anti-Semitism in countries that persecute us. The world’s only Jewish state is there as our sanctuary and our safety net.

My maternal great grandparents fled the Pale of Settlement during the Russian Revolution for the safety of Bristol. Like so many Jews in the diaspora I carry the memories of exile, of family tales of fear, escape and refuge. When we find ourselves living in those countries that gave our ancestors asylum we appreciate it, we contribute, we assimilate, while still honouring our spiritual and ethnic traditions. In UK synagogues prayers are always said during Shabbat services for Queen and country.

But given the atrocious rise in anti-Semitism in Europe yet again many Jews, including those in the UK, are considering packing their bags and leaving for the one country that will not persecute Jews.

The Jews of France are certainly fleeing. Since 2000 more than 10 per cent have migrated to Israel with half of that in the past five years. The heinous murder of Sarah Halimi in Paris by an Islamist is just one of latest attacks on Jews in France.

The situation for British Jewry is just as worrying. Between January and June of this year the Community Security Trust (CST), a charity that monitors anti-Semitism, recorded over 767 assaults and incidents against Jews in the UK. This is an unprecedented number recorded for this time period and a 30 per cent increase from last year.

The Crown Prosecution Service responded by saying they didn’t ‘recognise this’ and offered the cowardly defence that they are prosecuting more hate crimes than ever before. Beyond the disturbing Orwellian concept of ‘hate crimes’ lies an even more troubling fact – that by categorising anti-Semitism with other forms of racism its impact and legacy is ignored. This serves to embolden Jew haters.

Despite the obsessive focus on Islamophobia it is Jews, and not Muslims, who face the highest amount of attacks on the basis of who they are. When faced with anti-Semitism some of  us write to raise awareness and try and make sense of it, some join grassroots movements and attempt to counteract Jew hate on British streets.  Most sigh with the weariness of a thousand sighs, heavy with the remembrance of the vicious cycle of anti-Semitism. And some close their eyes and hope this hatred will just go away. But it never does.

We Jews will not disrupt council meetings, scream for bloody vengeance on the streets or attack an innocent with a knife or a car. It is not our way to behave like this in the countries that give us sanctuary. What we usually do is mutter our discontent, and like my great grandparents, quietly pack our bags and then leave when we no longer feel safe.

For some readers, the response to this might be ‘so what’. But history has shown what happens when anti-Semitism gets out of control. And what starts with Jews never ends with the Jews. The terrorist car rammings and stabbings in London mimic Islamist attacks in Israel.

There is no coincidence that uncontrolled immigration from Islamic hellholes has brought Islamists to Europe who have a burning hatred for Jews. Most come from countries where the media portrays Jews as horned devils and Israel an evil which must be eradicated.

It is essential to remember that there are millions of Muslims who live ordinary and peaceful lives throughout the world and in the UK. If we stereotype them then we risk becoming extremists ourselves. But we need to be able to speak out and say that increased immigration from Islamic lands is a major cause of this rise of anti-Semitism in Europe.

The Left’s love-in with Islamism and Marxism has also led to the normalisation of anti-Semitism. The influence of Wahhabism in our universities and the blatant adoration seen on our streets for Iranian terror machines like Hezbollah embolden Jew hate. Western useful idiots also pander to Islamism and its victimhood industry and conveniently ignore menacing Jew hate in favour of exaggerated Islamophobia.

After each Islamist attack we are forced to watch the usual sickening charade of our MPs and police warning us about the terrible rise in Islamophobia. This enrages me. The focus should be on the victims and their families. It should not be on imagined burning down of mosques. Like some sort of twisted version of the film Minority Report, where people are warned about crimes which have not yet happened, we are held hostage by this vile form of virtue-signalling. Perhaps our police are better off focusing on where real hate occurs – the unprecedented increase in anti-Semitism. I write this comparison not to be divisive but to tell the truth.

The fear of being accused of racism is now so strong that our authorities are terrified of confronting the main culprits of anti-Semitism – the Left and Islamic fundamentalists whose Jew hatred overwhelms morality and goodness. Far easier to murmur some inappropriate response and get back to the very important business of admonishing us not to make friends at the gym in case we all turn into snarling far right terrorists than tackle the real dangers facing our society.

The recent Al Quds Day rally, sponsored by Iran and promoted by the insidious Islamic Human Rights Commission, is a perfect example of this. This bunch of self-pitying anti-Semites marched down our streets baying for Jewish blood and for the destruction of Israel while flying the flag of Hezbollah.

Also in June a member of a grassroots organisation called Israel Advocacy Movement was attacked by rabid Jew haters. Joseph Cohen was recording yet another display of anti-Semitism at Speakers Corner in Hyde Park when he was chased by a screaming mob who recognised him as Jewish. Joseph yelled for help to a solitary policewoman who, disgracefully, stood by and did nothing.

This cowardly member of our weakened police force echoes Sadiq Khan’s appeasement of terrorism. Fearing we could be murdered by jihadists shouldn’t be part of living in a civilised city.  But Khan, like the drearily ineffectual Amber Rudd, is held back by political correctness. Rudd’s warning about Isis threatening our synagogues and schools is redundant, given she can’t stop the terror flags of Hezbollah and Isis being flown on our streets.

Rudd should have banned Al Quds Day. Despite official concern about the abhorrent increase in anti-Semitism, terrorists scream unhindered in public for the murder of even more Jews. Yet Rudd prefers to fixate on sabotaging Brexit rather than preventing more Jihadists from prancing around in our streets.

Our police are reduced to a bunch of social workers and the only power they exercise is in creating memes and patrolling Twitter.  No wonder they ignore incitement to kill Jews.

Thanks to the perfect storm of the love-in between the Left and Islamism, anti-Semitism is now embedded in our culture. The Left controls our discourse, schools, universities, courts and police. It is no wonder Jew hate is ignored in favour of the Left’s cause celebre – Islamophobia. Anti-Semitism will only be defeated when we find the courage to speak the truth.