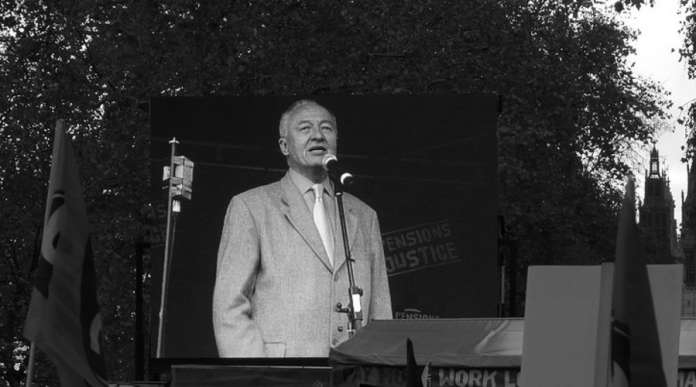 The Labour Party has just vomited all over the annals of history. Their weak response to the vile anti-Semitism of the new poster boy of Holocaust deniers – Ken Livingstone – is a disgrace. A year’s suspension is meaningless but unsurprising given that Labour is the go to party for Jew haters. Perhaps Labour’s cowardly disciplinary panel agreed with Livingstone’s ludicrous attempts to blame the Holocaust on the Jews. Or maybe they were in awe of the anti-Israel credentials of his defence lawyer, the appalling Michael Mansfield, who once compared Israel to Apartheid South Africa at the kangaroo court of the Russell Tribunal.

By talking incessantly this past year about his favourite subject – Hitler – Livingstone has become a sad apologist for the Nazi regime. Since last April he has unfortunately been back on our television screens after claiming that ‘Hitler was a Zionist’ as a miscreant defence of Labour MP Naz Shah’s dire anti-Semitic remarks. Ever since then we have been exposed to Livingstone’s shameless grandstanding accompanied with the vehement arrogance so typical of those who believe in the lies they spew out.

I admire Shah as she has since apologised profusely and has actively sought to engage with the Jewish community by speaking at synagogues and taking part in inter-faith activities. Given the demographics of her constituency, Shah has bravely jeopardised her political career with her ethical actions. Perhaps Livingstone should learn from her morality. But he continues to utter, with astounding graceless disdain, more lies and half truths to back up his initial ridiculous statement. Perhaps he is too far immersed in his grotesque Hitler obsession to even contemplate that he could be wrong.

Livingstone’s favoured historical event to substantiate his absurd claim is the 1933 Haavara Agreement which was partly a Nazi attempt to counteract an American Jewish boycott against Germany. Jewish assets, previously frozen by the Nazis, were released to pay for the passage of Jews to Palestine. It also had the added benefit – for Hitler – of being able to expel more Jews from Germany. This Treaty was not without controversy within the Jewish community and was later discouraged by the Nazis after they began their slaughter of European Jewry.

But we all know that Livingstone has form when it comes to us Jews and Israel. As Mayor of London he displayed his love-in with Islamists when he gleefully embraced the terror inciting cleric Sheikh Yusuf al-Qaradawi at an event glorifying the misogynist hijab in 2004. His slimy apologist stance for the Islamic terrorists who slaughtered and maimed Londoners in 2005 was disgraceful. And who can forget the beginnings of his bizarre preoccupation with Hitler when he accused a Jewish journalist of acting like a concentration camp guard? What kind of person answers a question about a party with a jibe about the Holocaust?

Last week he reiterated his nonsensical claim of so-called collaboration between Nazis and Jews by claiming that the SS set up training camps to prepare the Jews for living in Palestine. Perhaps Livingstone should enlighten us to the sources of his nausea inducing lies. Livingstone now sounds more like an unhinged David Irving groupie and less like a rational human being.

Are we watching a damaged man becoming undone by his ideology and ambition? Or is it that missing the limelight he is clumsily trying to reignite a new political career? Or is his motivation for manipulating historical facts an attempt to prove that Jews were complicit in the Holocaust and therefore the state of Israel should not have been created? This would make him very popular with his Islamist chums, Momentum thugs, Holocaust deniers, Labour party members and Jew hating conspiracy theorists. In fact the much anticipated marriage between the Nazi loving far-Right and the Jew hating Left finally happened when Nick Griffin recently vocalised his support for Livingstone.

Livingstone has blamed every one else except himself for this debacle. He has lashed out at Labour MPs, accusing them of ‘smearing’ him. He has blamed the Jews by whining that the Jewish Chronicle misconstrued their reportage of his sneering and abhorrent words. His next step is  probably to portray himself as a martyr fighting against us awful Zionists.

But Livingstone has not realised that the majority of right thinking Britons are repelled by his insidious attempt at historical falsehood. They are laughing at his noxious hubris and are appalled by his lies and half truths which he utters in his futile attempts to explain his new hobby of Holocaust revisionism.

Suspension and expulsion are showboating and pointless tactics. Livingstone’s suspension is a useless exercise by the Labour Party to reclaim some semblance of morality despite being infested by anti-Semites and Islamists. Afzal Khan, Labour’s chosen candidate for the Gorton by-election in May, epitomises this predicament. Khan is a fervent devotee of the Ayatollah Khomeini and likes to tweet comparisons between Israel and the Nazis. Labour are attracting racists to their Party faster than they can suspend them.

Livingstone is symptomatic of a bigger problem in the Labour Party, The election of Jeremy Corbyn as Labour leader has meant that Livingstone and his ilk finally feel emboldened to speak their malicious discourse against Jews and Israel without any fear of any real consequences to their political careers.

Britons must stop their habit of tribal voting. Each unthinking vote for Labour councillors, mayors or MPs means that more Corbyns, Livingstones and other assorted malcontents and racists will be catapulted into power. The unholy rhetoric of anti-Semitism can be stopped if politicians like Livingstone no longer have a political platform from which to preach their hatred.