NewsPaperthe art of publishing
HomeKathy GyngellKathy Gyngell: Carney should start worrying about the pound and stop...
7

Kathy Gyngell: Carney should start worrying about the pound and stop playing to the feminist gallery 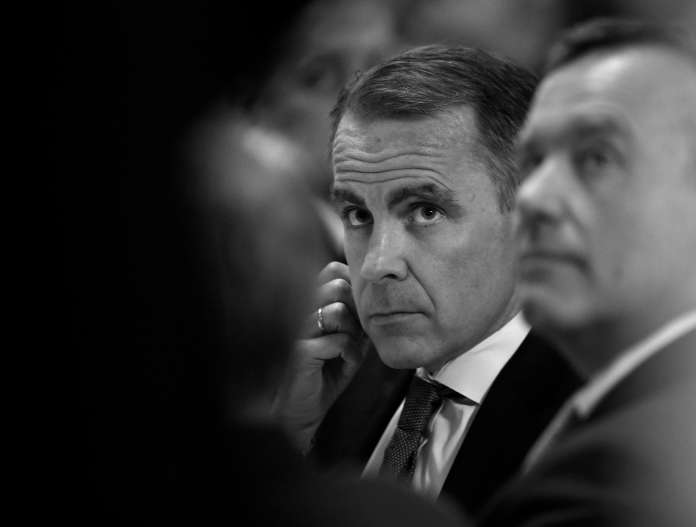 From the moment he took office in July 2013, Mark Carney has made no bones about his ambition to increase the number of women in senior roles at the Bank of England.

Instead of showing off those banker skills that are meant to have saved Canada from the 2008 financial crisis that engulfed the rest of us, the first thing the rock star banker did was to impress his feminist credentials on the British public and the international banking world.

He leapt on the opportunity provided him by Caroline Criado-Perez’s feminist-inspired campaign to have more women’s  names and images printed on bank notes.

Hardly yet ensconced in Threadneedle Street, he was seen side by side this little known activist in front of Jane Austen’s house for the launch of the Jane Austen bank note (a face itself that hardly launched a thousand ships) with a stage- managed throng of TV cameras and reporters in tow. It certainly made the Governor’s face better known.

Hard on the heels of this outing he announced, apropos of nothing, that he wanted to see a woman Governor of the Bank of England. We didn’t hold our breath to see who he was proposing to stand aside for.

But fine words need some action and then followed his promise to “grow top female economists all the way through the ranks”. Gender not merit was to be the order of the day.

He said he was surprised that none of the present members of the Monetary Policy Committee (MPC), which sets interest rates, were female or that, of the committee’s 33 members since the Bank was granted independence in 1997, only four had been women. Really?

Is it so very surprising?  How many women do we hear complaining every day that they are over-qualified for and underappointed to the MPC?  After all his own very qualified wife seems more preoccupied with family recycling, watching flowers grow and her left wing causes than with her career at Research at Canada 2000.

But true to his word, the very modern Mr Carney went ahead a few months ago and appointed Nemat Shafik, a former deputy managing director of the International Monetary Fund, to Deputy Governor, despite her lack of obvious skills and experience for the role; deficits that clearly bothered MPs Andrew Tyrie and Jesse Norman when they quizzed Ms Shafik  before  the  Treasury Select Committee.

Up in front of the TUC himself last week, Mr Carney was still sticking to his PC guns, assuring the assembled feminists and honorary (male) feminists there under the watchful eye of Frances O’Grady that he was still right- on gender wise.

His commitment to ‘diversity’ on the MpC and elsewhere in the BoE was as high on his agenda as ever. The gender balance had not been what he expected when he arrived, he told them. No. Nor, he went on, does the staff of the Bank yet fully reflect the diversity, the broader diversity, of the United Kingdom. Oh dear.

But not to worry, he’d made great gender parity strides (and I hope the TUC ladies really did applaud him for it). In just 15 months he’d upped the graduate intake from a quarter female to just under a half (tick). As for his senior management ranks, he’d turned what was a fifth into a third. A third, no less, of his top 50 senior managers are women he boasted (another tick surely?).

Just to make sure they understood his commitment to the cause he added (rather foolishly it turns out) “it’s not just the right thing to do, it will make us much, much more effective.”

The only trouble is that it won’t. More likely is that the reverse will be the case. The oh so very clever Mr Carney, like so many others, spouted off without checking whether there was any evidence for his great moral and economic assertion, as the organization Justice for Men and Boys were quick to spot.

It’s is a myth they have spent some time researching. The quite contrary evidence –  one predictable consequence of increasing female representation on boards is corporate financial decline – is set out here. Justice for Men and Boys have challenged Mr Carney to demonstrate the causal link between hiring more women in senior roles and strong improvements in company performance.

I for one look forward to Mr Carney’s public response. He owes it to us.

Had he been less keen to be politically correct and more concerned with the facts he would have known that ‘gender differentials’ in the professions are due primarily to substantively different work orientations and career choices among men and women, even among university graduates and the best qualified. Women who want it and are competitively able make it. But most don’t.

Mark Carney’s job at the Bank of England is to promote the good of the people of the United Kingdom by maintaining monetary and financial stability.

It is not to gamble the Bank’s capacity to fulfil its duty on  disproven feminist theorising, however desperate he is to be politically correct.

And in a week when our currency and financial system is at risk because of the Scottish referendum, it is to be hoped that the Governor will stop pandering to the Guardianistas and attend to his day job.