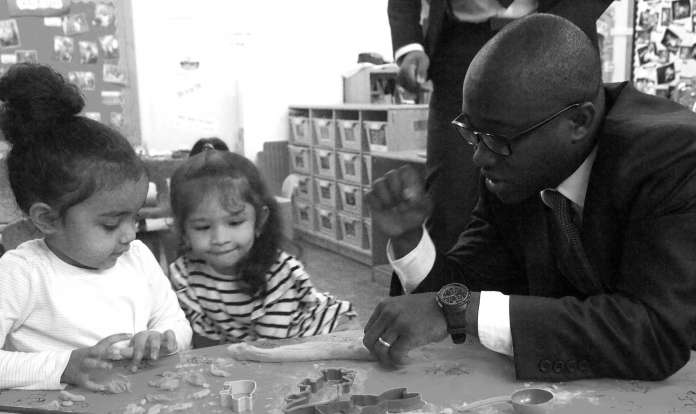 The Government has just published its latest edict: “Nurseries ‘must do more’ to give children the best start in life.”

Minister Sam Gyimah has called on them to take action after statistics showed that not enough children are making good progress – whatever that is at the age of two or three.

Who is Sam Gyimah? I hear you ask.

Well I don’t know either, except that he seems to be the Coalition’s new ‘Squealer’, while doubling as the Minister in charge of the Coalition’s benighted childcare and so-called early education policy.

Now in case there is anyone among you who missed out on reading Animal Farm, let me explain that Squealer was a brilliant talker.

When he was arguing some difficult point he had a way of skipping from side to side and whisking his tail, which was somehow very persuasive. The other animals said of Squealer that he could turn black into white. Sound familiar?

In fact he was a one (big) pig propaganda machine who took the unpleasant realities (no food, pigs not yet sleeping in human beds) and turned them into delicious lies (lots of food; piggies resting their brains to better help you).

I guess you are following me. Just to explain the similarities to Squealer’s persuasive platitudes, let me treat you to some of those published in the name of the Coalition’s latest ‘Childcare and Education’ Minister.

And believe me, it is quite a task to massage away the dire realities of the nursery care that the State seems ever more determined to inflict on ever more of the nation’s infants.

Never fear parents – if you believe the Government, childcare will get better. It will make your infants ready for school because that is what it is meant to do: “The statistics show that overall 60 per cent of children aged five are making good progress against the early years foundation stage profile (EYFSP).”

The EYFSP (in case you didn’t know) is designed “to ensure that all children are prepared and ready for school and life in modern Britain”.

How very reassuring. You see – goodness – “it measures things like how children play together, through to being able to count to ten and write their own name.” Things that the average parent today is clearly incapable of.

But, oh dear, despite all that, it turns out that although “the statistics published today clearly show that some progress is being made…more must be done to ensure children, especially those from disadvantaged backgrounds, are put on the right path”.

That’s why nurseries must work harder – so parents can stay reassured.

What Minister Gyimah forbore from telling parents in this press release was Ofsted’s recent finding that one in six nurseries and pre-schools that today ‘cater for’ some 150,000 babies and toddlers deliver poor standards of early education, have unsafe premises, gaps in first aid training or have staff smoking on the premises.

Instead he delivered this platitude: “Parents need to be confident that while their children are out of their care they’re not only safe, happy and having fun but at the same time developing important skills, like playing confidently with their friends, speaking, and understanding words, letters and number.” Indeed.

An honest response from the Government would be that parents cannot be confident of these things and their toddlers would be better off and happier at home holding mum’s hand.

Even without Ofsted’s observations it should not be rocket science to know that whatever the exhortations and whatever the subsidies, daycare nursery is far from an ideal environment for preschool babies and infants to develop in.

For an insightful account, please read May Saubier’s brilliant observations of the reality of day and nursery care in Doing Time – how even the best fall short of meeting young infants’ needs. They cannot.

In fact, the person who should be reading this book is the Minister and while he is about it I suggest he mug up on the cognitive and emotional development of the child – including Piaget’s seminal account of its moral judgement. Then he may begin to see why a daycare centre, creche or nursery is far from an optimal environment for children not yet potty-trained and too young to understand concepts of fairness and sharing.

Patricia Morgan’s warnings about the hidden costs of childcare and the myth of high quality affordable childcare , that she first published back in the 1990s are more, not less, pertinent today than they were then.

That was the start of the national experiment in bringing up infants in daycare instead of at home. It is ironic that those who it was meant to help most – the disadvantaged – it has continued to fail.

Nurseries and daycare were never about babies. They were about getting women into work and releasing them from their childcare obligations.

I will leave you with Squealer’s words and you will get my drift.

“Comrades!” Squealer cried. “You do not imagine, I hope, that we pigs are doing this in a spirit of selfishness and privilege? Many of us actually dislike milk and apples. I dislike them myself. Our sole object in taking these things is to preserve our health. Milk and apples (this has been proved by Science, comrades) contain substances absolutely necessary to the well-being of a pig. We pigs are brainworkers.

The whole management and organisation of this farm depend on us. Day and night we are watching over your welfare. It is for YOUR sake that we drink that milk and eat those apples.”

Rest assured – this diet of nursery care is for your babies’ good, not the State’s.

Share
Facebook
Twitter
WhatsApp
Email
Previous articleLaura Keynes: Egg freezing is no liberation for women. A family-friendly workplace is the answer
Next articleLaura Perrins: No one votes for a coalition. It just gets imposed in a shabby back-room deal