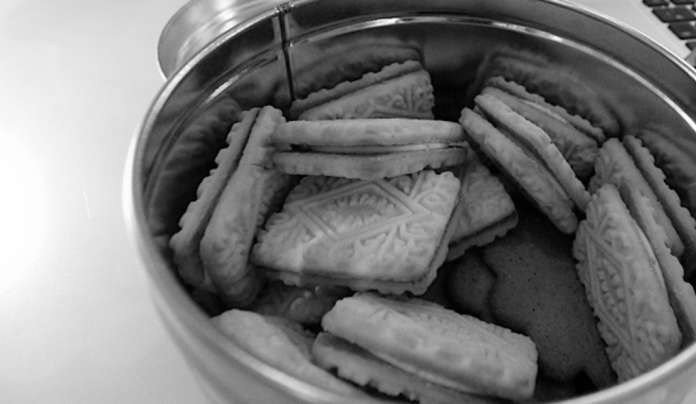 A custard cream war with the EU and Jacob Rees Mogg for PM! This is the campaign I am thinking about at The Conservative Woman after Call Me Dave’s letter about his great EU renegotiation coup dropped into my email inbox last night.

Where was any guarantee of the future of the British biscuit? What reassurance was there that the EU would not limit our trans fats? None I tell you, none. Dave has completely ignored the Brussels threat to our custard creams, which along with such delights as pizza and ice cream, could disappear from our supermarkets or be rendered revolting, by proposed EU-wide curbs on the fats, which improve the taste and shelf-life of processed foods.

As my hero Rees Mogg put it: “Brussels should keep its nose out of it,” he said. “They could be taking these goods off the shelves within two years, or at the very least rendering them so disgusting that no one wants to buy them.”

“I would be very concerned if it meant the end of any of the many excellent foodstuffs which require trans fats to make them taste delicious. The continuing extension of EU powers highlights why the Brussels deal we appear to be heading towards is so inadequate.”

It was all Dave showing off again, assuring us that he’s won his EU battle, flaunting the spoils of war in his briefcase, even though they are long on feel-good promises and light on specifics.

A ‘red card’ system for national parliaments to block unwanted EU laws; an end to ‘something for nothing’ welfare for EU migrants; an end to British taxpayers’ money being used to bail out the Eurozone and an agreement that we will never join the euro and get fair treatment for our businesses in Europe (some mistake surely – don’t we have these already?). And don’t forget: Whoopee, Britain released from‘ever closer union’ so we do not become part of a European Superstate! How kind and considerate.

After we have voted In, we can be sure that we are not going to be inveigled into signing any more treaties, just like we weren’t forced to sign Maastricht or Lisbon. What a wonderful reassurance.

Pity Dave didn’t just try to protect the British custard cream. It would have been a real test.

I bet he did not dare. Far better to make promises so general that they cannot be tied down.

Better to assure us that all these vacuous changes can be achieved because, guess what, “they are all in the document”. I’ve put this in quotation marks because it is actually what he wrote after his chat with EU Council President Donald Tusk.

It makes them real, never mind the fact that there is as yet no endorsement from the 27 other EU leaders or subsequent timescale on writing them into EU law. I know the education supplied by British Government Inc. has hardly turned Brits into the brightest of bunnies but just who does he think he is kidding?

I also wonder what “Animal Farm” wheeze he has up his sleeve when it turns out that his famous red card is meaningless; when migrants keep on arriving in droves and the country’s infrastructure collapses under their weight; and when we keep on paying the annual price for the pleasure of being an EU member – some £55 million a day as Nigel Farage claims – all as the EU, with us in it, moves to ever closer union?

Will he have scapegoats – Theresa May for bungling immigration or Michael Gove for letting the European Court of Human Rights ride roughshod over us? Or will Boy Dave simply brazen the whole thing out, leaving office singing a new ‘Britain in Europe – my great deal, my way’ anthem?

The wily Mr Cameron has already covered himself. There is more work to be done, he earnestly writes, more detail to be nailed down. You bet there is.

Where did I read such lines  before? Wasn’t it Boxer, the work horse of Animal Farm who worked ever harder in an ever more futile endeavour, naively still believing in his masters until he died on the job, leaving the farm in a knacker’s van?

Well that’s us – not clever, cynical and with a whole lot of front, Mr Napoleon Cameron. It’s the British people who are the Boxers. We are the people he is out to fool.

So far he’s convinced Ladbrokes that this negotiation will win him the referendum. It may, especially now that the vast majority of the weak and depressing bunch who call themselves cabinet ministers has fallen into line behind him.

Oh for a Jacob Rees Mogg among them. Or even that just one of them would stand up and back the Somerset MP.

Would that one of them would put Cameron’s re-negotiation to the custard cream test. Which of your so called renegotiation pledges, Prime Minister, will secure British eating habits and keep Brussels’s nose out of them? Which will stop EU-wide harmonised legal limits on our freedom to scoff our biscuits and pies?

None I’ll wager. Leave it to Dave and Brussels won’t be keeping its nose out of anything. As for Dave, he deserves the custard pie treatment, not a tasty custard cream.

Share
Facebook
Twitter
WhatsApp
Email
Previous articleT. A. Pascoe: Father Kolbe’s Auschwitz heroism gives hope to us all
Next articleAndrew Cadman: Dave may have slipped a noose around the Tory neck