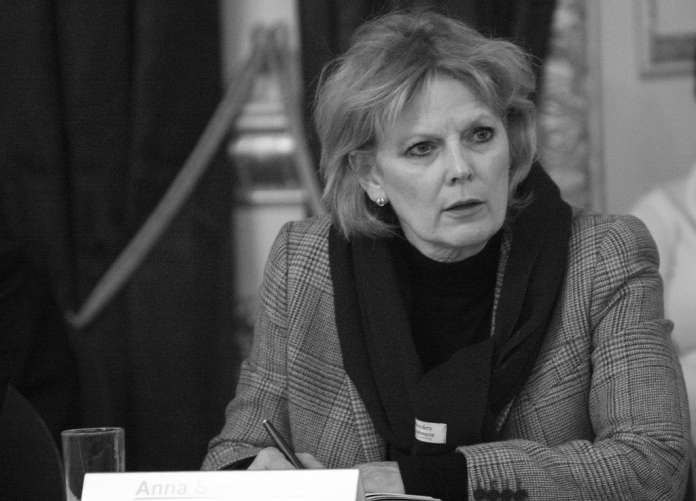 Over promoted, over confident and, disastrously, all over the political front bench, David Cameron’s fast-tracked trio of Tory females, namely Mss Rudd, Morgan and Soubry, have been making a bad case for female board level quotas this last week.

I’ve listened in half amusement and half disbelief to their respective Project Fear threats.

First came Amber Rudd’s car crash interview with Today’s Justin Webb over her claim that Brexit would lead to massive rises in energy prices. Despite, or perhaps because of, her abysmal ignorance and apparent failure to master her brief (did she have one?), she resorted to what has become her standard boss, bully and patronise mode. Her uselessness as the government’s telly spokesman on energy seems not to have occurred her – or her boss.

It begs the question of whether she’s up to her task at hand as Energy Secretary and, if not, exactly what she is there for? Her gender and her guaranteed compliance to her boss, I expect.

Then we had the PM’s next acolyte to do her master’s bidding – the witless, platitudinous Nicky Morgan and her asinine threat that leaving the EU will risk a “lost generation becoming a reality” – as though, as Rob Slane points out, the EU has not made that come true already. The real threat to our children is that their education is in her hands.

The PM had all his girls out campaigning over their Easter hols. Business Minister Anna Soubry had the task of busting the six myths of the Leave camp through an article which, though under her name, looked very much like it had been delivered direct from Number 10.

Maybe that was to give her more time to master her steel brief – the genuinely fearful crisis of her watch for which she appeared singularly ill prepared on Tuesday morning’s Today programme. Her tone from the start was offensive from a brusque “Mornin’” to John Humphrys to highhanded interruptions at nigh on every question he started to put to her. It is a challenge to describe quite how offhand she came across.

She acknowledged the PM had warned her of looming problems when she took her job last summer – exacerbated by the dumping of cheap steel imports. Since then she had been either abstaining on Britain’s behalf from voting up tariffs or agreeing they didn’t need putting up until it was too late. Because this she said – in blatant contradiction of the facts – was not a problem and nor, mind you, was the solution raising the tariff as the USA had done to protect its industry.

No the prime consideration was something called balance, she blathered – to be worked out between the member states and other business interests.

Yes, her solution, to the extent she was looking for one at all, lay with the brilliant ‘Community’, or EU in other words, to which it is clear she blindly adheres, and whose cause she took the opportunity particularly insensitively to push.

The fact that it is the EU’s tariff inaction, along with its Renewables Directive and Large Combustion Plants Directive, along with the dumping of foreign cheap imports, that has sounded Port Talbot’s death knell matters not.

Port Talbot is being shut down, Humphrys exclaimed in astonishment. Try that line with them! But the crass (so much for being a woman) Ms Soubry carried on bulldozing and over talking, neither addressing these questions nor drawing breath, despite Humphrys’s every efforts to draw the interview to a close.

With the announcement of Tata’s decision to sell all its UK holdings, we were given the pleasure of Ms Soubry’s company on the Today programme again. Despite her failure to factor this outcome into her ‘non plans’ the day before, there wasn’t a flicker of reflection let alone concern. There was no change of tone; her bombast control was still at full throttle.

I was left wondering what was worse – her blind adherence to all things EU when it is EU rulings that have forced our workers to compete with their hands tied behind their backs or her ignorance of the most basic of facts.

Under Nick Robinson’s determined questioning  it transpired she was unaware of Tata’s sale of its Scottish plants to the Scottish Government. Shouldn’t the Minister have known that, Nick Robinson managed to ask, reading her Tata’s press release confirming the fact.

He was wrong, she said. It was a device.

Still in denial, the exposure of her ignorance discomforted her not one jot. Nor did she have any idea about alternatives to government ownership, beyond a futile hope Tata would give them as much time as needed to sell the plants and ’the dream’ that steel would be made as well as rolled in Port Talbot. What cloud was she on? Had she a brief or hadn’t she mastered it? Maybe she  didn’t think she needed one?

Whoever is responsible for her (and Amber’s) media training would do well to point out is that if listeners hate bad manners they hate brazen women even more – especially if they railroad their way through interviews. It’s what makes men call them that ‘appalling woman’.

Unlike their infinitely more charming and independently minded colleagues Priti Patel, Minister of State for Employment, and Penny Mordaunt, Armed Forces Minister, Dave’s compliant trio seem have one ambition only – to do their boss’s bidding to the highest place it takes them. The swagger in their step this trio set out with last summer has turned into something infinitely nastier. Their hubris is beyond parody; it is dangerous and they are no standard bearers for their sex.