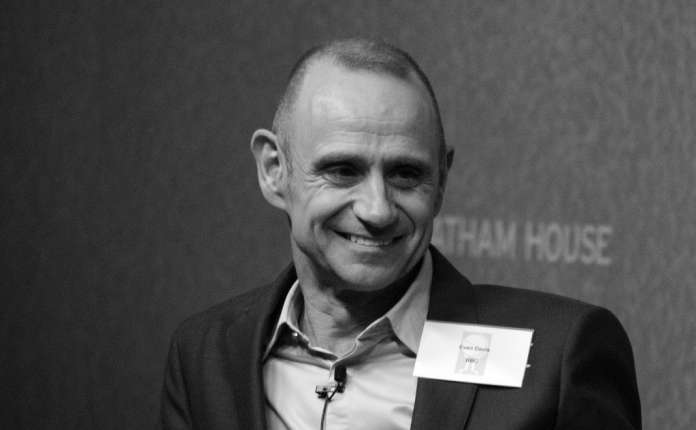 Scenting Tory blood, the BBC cranks up its anti-Brexit propaganda. That was the conclusion I reached at the end of the BBC’s shameless week of anti—Brexit coverage a year on from the referendum victory. The Tories’ election debacle appeared to have given them carte blanche to revolt.

Now they have declared all-out war. On Wednesday night’s Newsnight Evan Davis used that time-honoured tactic to justify what is clearly now the BBC’s official stance. He rewrote history – in this case the very recent history of the election result.

In an aggressive and rude interview with David Jones MP – a minister in the Brexit department until the election – Evan Davis asserted as a fact that the ‘Theresa May plan for Brexit’ was one ‘which clearly didn’t grab the population in the election’. How he was party to this knowledge we were to find out.

“I don’t think it was that,” Jones immediately countered, “I think frankly the big issues were other non-Brexit-related issues, most particularly the issue of social care but also one or two other issues too. But I think so far as Brexit is concerned, we are now in the position where 80 per cent of the electorate of this country voted for parties who want to take Britain out of the EU.

To which our insolent BBC apparatchik replied: “Sorry, what planet are you on?

“Loads of swing voters who might have voted Tory voted for Jeremy Corbyn’s Labour Party because they so detested the Theresa May version of Brexit. Metropolitan, liberal Remainers . . .”

Yes, of course, this was why the swing voters voted for Corbyn!

Quite rightly, Mr Jones retorted: ‘I don’t see how you can …’ but  before he could finish, Evan bulldozed over him: “….We cannot vote for Theresa May because we don’t like her Brexit . . .’

This was Evan’s theory of the election result and that was that.

David Jones once more attempted  to question this thesis: “I don’t see how you can possibly read that into the election result – 80 per cent of the population voted for parties that clearly support Brexit.”

Mr Jones tried again, once more to be ridden roughshod over.

If that is not a fake fact I am not sure what is.

The valiant David Jones had one more go: “Well, I don’t see how you can possibly read that into it”.

And guess what, Evan couldn’t wait to explain to this poor idiot Tory what was going on in the mind of the man on the Clapham omnibus on the way to vote (according the Book of Evan, and the Holy Gospel of the BBC, that is). It was, he avowed:

Is that so? How many voters I wonder would have passed a quick test outside the polling booth on exactly what the customs union is?

But you have to be quick with your repartee if you are not going to be a lamb for the slaughter on the BBC. By now poor Mr Jones, like a torture victim who manfully keeps repeating his name, rank and serial number, could only respond: “I think that that is a complete misreading of the election if I may say so”.

It was, of course. But that didn’t stop Evan triumphantly snarling: “Do you accept polls that show more people believe that Theresa May’s Brexit should be amended than support it?”

The much tried Tory didn’t contradict him. A pity. The polls show no such thing.

What one showed with quite crystal clarity on the eve of the election was that nine out of 10 people rejected the idea that this was a “Brexit election” at all – insisting that it should also be about public services. A poll for The Independent showed quite simply they did not believe her. They saw the election as being about public services. This, not Brexit, was uppermost in their minds. It was, of course, the ground Mr Corbyn’s Labour fought on and what dominated the public debate – certainly from the ‘dementia tax’ cock-up onwards.

Evan Davis’s interpretation of the election was bizarre. Contrary to his assertions about a lack of support for Mrs May’s Brexit plan, eve of election polling showed that the Conservatives had a strong lead when people were asked which party has the best policy on Brexit – 47 per cent named the Tories against only 19 per cent naming Labour, and of Labour voters one in five thought the Tories had the best approach to Brexit.

I must say I am now looking forward to Evan’s creative take on the rejection (defeat) of Chuka Umunna’s Remoaner amendment to stay in the single market and customs union in Parliament yesterday – by 322 votes which included the Labour leadership and the majority of Labour MPs.

I can’t imagine he will he let the truth get in the way of a good story. Especially when that story supposedly justifies an all-out BBC assault on the Brexit process over the next 19 months.