NewsPaperthe art of publishing
HomeKathy GyngellKathy Gyngell: Farage is no racist despite ITV’s bid to load the...
18

Kathy Gyngell: Farage is no racist despite ITV’s bid to load the dice against him 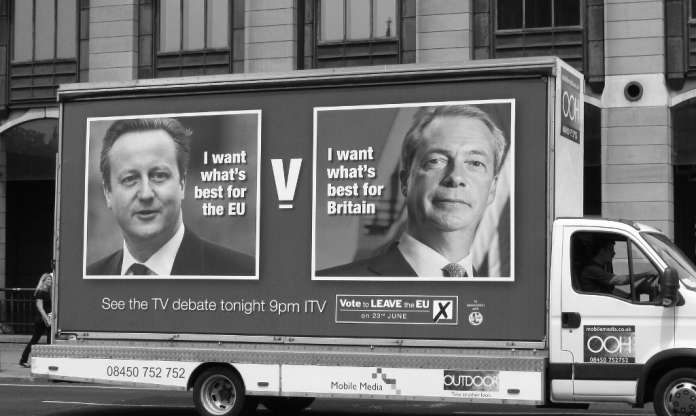 Tuesday night’s ITV ‘debate’ was not just a travesty of this term – you could hardly called this pre-planned, separate tables, Q&A format a debate – it was also a case of helping mud stick with a supposedly impartial broadcaster applying the brush. Nigel Farage may be an old fashioned beer drinking and fag smoking bloke but that hardly makes him a racist.  He may wear clothes more suited to the golf course than Westminster, but neither does that make him a racist.

I imagine he is the first to spot a racist when he sees one. Anyone who’s taken the trouble to read the Ford and Goodwin’s fact-packed account, Revolt on the Right, of the rise of Ukip under Nigel Farage’s tutelage knows that his slate is clean. Far from finding examples of racism, these two left-leaning sociologists uncovered a history of Ukip leadership fighting it and on constant guard against entryism.

None of this stopped  Britain’s mainstream media from going into overdrive a few days ago, accusing Farage of scaremongering for the crime of citing recently released German crime statistics – including sexual offences – which demonstrated  that  migrants are  ‘over represented’. It wasn’t playing cricket, they judged, to warn the British public of the price Sweden and Germany is already paying for uncontrolled male economic migrants from different cultures. Unpalatable truths, it seems, become racist over night, and certainly when Archbishop Welby takes a hand and adds his moral authority to this hypocrisy and sanitising of the truth.

Here in the ITV studio stood a man already condemned as a racist by the ‘tricoteur’ hierarchy of the press  and the Cof E – without resort to trial or jury. And it was inevitable that Farage’s questioning would be more  hostile  than Cameron’s – even The Guardian conceded that. So it behove presenter Julie Etchingham, all the more, to be even handed; to allow the already condemned man time  to counter accusations of “inflammatory” scaremongering and racism  – the worst crimes (apart from paedophilia)  you can be accused of today.

She was not and she did not;  she curtailed his defence by pandering to the questioners angry and prejudiced interruptions. ‘Calm down’, Nigel appealed to one of them. Julie leapt, not to Nigel’s but to the questioner’s defence.  The question was stated calmly, she said. No, Julie it was only so in tone. The content was far from calm – it was of itself inflammatory.

Predictably, neither the studio audience nor the commentators afterwards were pressed to explore or deny the facts on which Archbishop’s Welby’s and the audience’s accusations rested. On the ITV news programme that followed, what did we get as a result but the whole debate again – over whether Nigel Farage is a racist or not? There was still no reference to the undeniable evidence of Cologne or why politicians of both parties are so keen to buy into this demonisation of Farage. His accusers should have been challenged on the threat to the morally defunct and out of touch leaderships of both Tory and Labour parties posed by the rise of radicalism and nationalism inspired by the Ukip leader.

You can plant a thought in people’s minds, bed it down with some discussion with eager fellow travellers, then nurture it by interviews with so called ‘ordinary’ members of the public, one of whom gave the game away by referring to Mr Farage as such and the Prime Minister as ‘David’. That in a nutshell is what ITV did with this debate. Mr Farage has to be congratulated on his measured handling of it.

Predictably too the Twitterati verdict deemed Nigel’s interactions with two of the women who questioned him as unattractive and patronising. I thought these rather good adjectives better applied to Mr Cameron, who seemed to me to be p…ing on all of us.

I hope others thought so too.