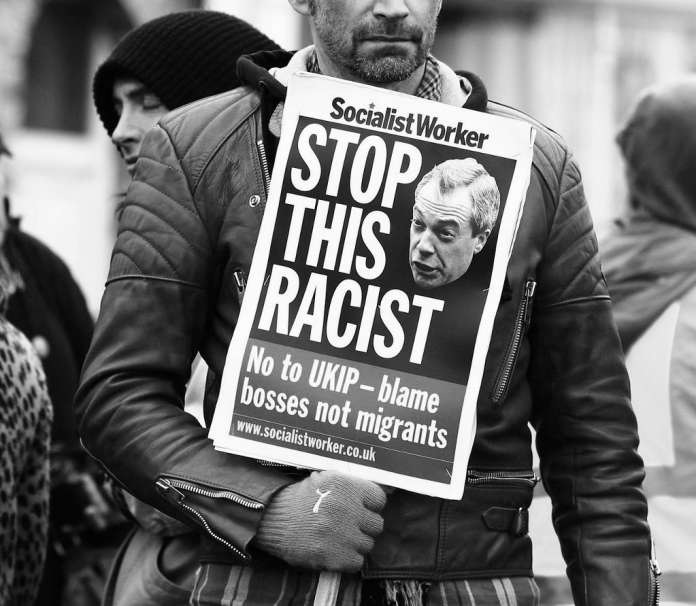 The British ‘liberal’ political elite still hasn’t ‘got it’ on immigration. Pretending it’s not a problem is proving a hard habit to kick. Unfortunately, politicians and their ‘progressive’ left friends in the media have been hooked on this habit for years. As with any addict the worse their problem gets the more intransigent they become.

Not even the ‘rock bottom’ of Brexit jolted them awake though immigration was the issue above all others that drove the vote.

They were even in denial about that.

The elite’s universal condemnation of Nigel Farage’s much maligned poster blinded them to the fact that it was exactly that ‘wot won it’ for Brexit. It pictured an inconvenient truth, that the political class found embarrassing and were desperate to downplay, of thousands of young male migrants, some economic, some seeking asylum, entering and making their way across Europe towards Germany, Scandinavia and Britain.

They dismissed it as inflammatory, knowing no one would be brave enough in the high-octane atmosphere created by Jo Cox’s terrible murder to challenge this. But was it? Didn’t it simply represent the truth?

Mrs Merkel had invited them. If Frank Field coined the phrase ‘thinking the unthinkable’, Nigel Farage with this poster said the unsayable. He made manifest a problem (now of a far greater order and urgency) that for years politicians, aided and abetted by the ‘metropolitan elite’ who control ‘respectable’ political discourse, had always repressed or denied.

Instead of addressing the message, true to form they turned on the messenger, desperate to put themselves on the moral high ground to dissociate themselves from the ‘disgusting’ Mr Farage.

But even as the Vote Leave leadership rushed to join the condemnation, the bubble had burst. The poster had side-stepped the elite’s careful mediation of immigration facts.

Public concern about migration has never been absent – not since British governments began making up migration policy on the hoof in the immediate post-war period. Why would it be? Britain does not have a vast empty hinterland like Australia or the USA.

And, quite rationally, it has risen in line with the scale of net migration and illegal immigration. Since 2011 both have gone off the Richter scale.

No it was not Nigel Farage who poisoned political debate with immigration but the political elite who, as Douglas Murray observes so brilliantly in his book, The Strange Death of Europe: Immigration, Identity and Islam,  have poisoned debate by throwing this accusation back at the public  –  that they are wrong and misguided: “This was not just done through charges of ‘racism’ and ‘bigotry’, but in a series of deflecting tactics that became a replacement for action”, Murray says.

He describes these as veering from ‘get over it’ to demanding the public accept its inevitability, from justifying it in the name of ‘diversity’, ‘tolerance’ or the needs of elderly care or employers’ needs  and finally to ‘payback time’ – turning it back on ourselves – for what  the British did in the past (which was course all bad).

It is as if the more immigration went up, the more specious and aggressive became the rationalisations in defence of it and refusal to accept it was a problem.

If politicians failed to plan for the impact of immigration before 2004 when EU enlargement took place – something the British people never voted for – it is nothing to their denial and failure since – in terms of integration, the pressure on infrastructure, health, education, housing and social security. Until they face up to the implications of migration since 2004, I cannot see the majority of politicians addressing the latest forward projections with any honesty.

It does not bode well. Douglas’s Murray’s remarkable and courageous analysis should have taken him straight into Downing Street as an adviser to the Brexit negotiations.

It has not. He remains on the fringes of political discourse, even maligned by the BBC.

But, as he sets out, net migration figures for each year since 2011 have been far in excess of 300,000 while the number of new national insurance numbers issued each year has been more than double that.

On current population trends Murray notes the most modest estimate of the Office for National Statistics is that the UK will rise from it current population of 65 million (already up by 6 million up from 2011) to 70 million within a decade. If calculated at current levels of migration, this jumps to 80 million by 2040.

While Boris was still in shock at the Brexit result, the ‘Vote Leave’ MEP Daniel Hannan was arrogantly pronouncing that: “If people . . . think that they have voted and there is now going to be zero immigration from the EU, they’re going to be disappointed.”

No, Brexit didn’t jerk the politicians out of their complacency. The knowledge that 3 in 4 adults want a reduction in immigration appears instead to have entrenched their previous prejudices. Tolerance and broadmindedness (of immigration) remain their default position, as though anything else was intolerant.  Never mind that cultural differences, as well as the fact of sheer numbers, have their considerable downsides. Never mind that ‘the movement of people in recent years has been of a ‘different quantity, quality and consistency from anything that had gone before’.

The latest favoured but again specious take is that ‘more damage was done by the Conservative Party’s 2010 manifesto promise to bring immigration down by the tens of thousands than anything else’. They should in other words have denied the problem again.

No, the damage done was the Party’s pusillanimity in being so easily ‘shamed’ out of acting on that very important promise – or worse – not meaning it in the first place.

Migration Watch’s latest report highlights that, on current figures, we’ll have to build a city the size of Birmingham every two years to cope with immigration demands.  Meanwhile the chattering classes, including the political elite on the right, keep their ear plugs in.

Some even plot to scupper the Brexit negotiations and keep us in the single market – with the free movement of people and the EU’s catastrophically lacking response to the migration crisis that entails.

Alanna Thomas, executive director of Migration Watch, is right. A halfway house Brexit would let EU immigration continue unchecked. Clare Foges is right too. The vow to cut immigration will not be forgotten.

Not trade, nor the rights of the EU citizens, but slowing the rate of immigration should be the starting point of our Brexit negotiations.

Share
Facebook
Twitter
WhatsApp
Email
Previous articlePaul T Horgan: The proof of the Dr Who-ette will be in the viewing
Next articleNiall McCrae: Labour MP Caroline Flint is a hero of the Brexit revolution