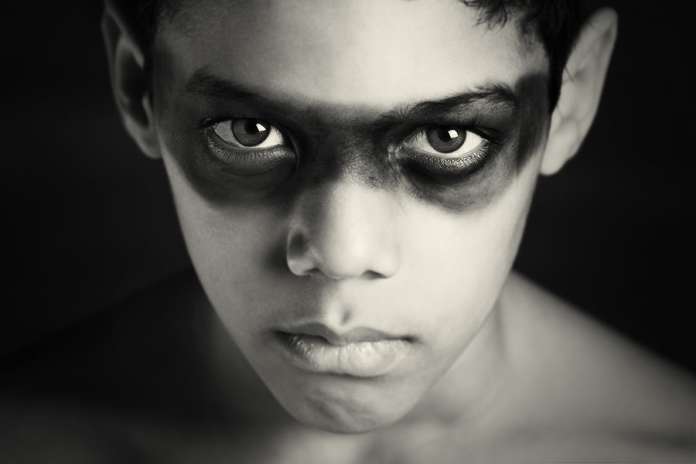 ‘Almost half of teenage girl coerced into sex acts’, The Times announced authoritatively yesterday morning, conjuring up an image of  school boy rapists on the rampage.

Behind the graphic headline I saw something else – the moving finger of the feminists. Not content with demonising all adult men as rapists in waiting, boys are to be dragged into this net too.

The male of the species becomes, by definition, a sex offender before he has even grown up.  Soon there will be no hiding place for him– not even in the cradle.

So woe betide any boy who does not learn to be gender compliant and subservient – any boy who has the temerity to rebel against compulsory feminisation.

That is what I read between the lines of this report on Bristol University’s new research into adolescent relationships.

Evidence that Alison Saunders, our wondrous new Director of Public Prosecutions, must have been pleased to read –  as proof of her pudding so to speak.

Last year, she issued guidance for action against teenagers who beat or hit their ‘partners’.

Yes, standing proud at the spearhead of the sisterhood  and with a clear feminist agenda to guide her public duty, Ms Saunders was ahead of the game.

Her justification for a need for action was hypothetical, as is typical of her. Even though it is unlikely that ‘victims’ would be sharing a home with their abusers, “the impact can be just as intense” as adult domestic abuse. (By the way they are not ‘victims’ until their assailant is convicted, but never mind that.)

Now with the helping and uncritical hand of The Times’s Social Affairs Correspondent, Rosemary Bennett, this new feminist spectre of  a national problem of sexual abuse of girls by boys is well on the way to being established.

“Until recently”, Ms Bennett helpfully wrote, “sexual violence and domestic abuse was considered to be a problem only in adult relationships, with attention focused on the risk of sexual abuse of children in their family, or from groups of adult men who groom and exploit them.’

No longer it isn’t, thanks to the DPP and now to Bristol University’s  new ‘hard’ evidence.  According to this study two  in five girls between thirteen and seventeen have “suffered sexual coercion of some sort, ranging from rape to being pressurised into going further than they wanted through physical force or other means.”

Through physical force or by other means – how conveniently conflated and vague .

What questions were asked and how, in what context, by whom and to whom? Which girls volunteered? Who agreed to participate and who refused and so on?

I, for one, would want to see an independent check on the reliability and validity of what I guess to be ‘self reporting’ data before I accept another of the study’s extrapolated claims that one fifth of girls had suffered physical violence at the hands of a boyfriend.

And what about The Times’s choice of headline? Many of these girls, it transpires, were more than happy to exchange explicit images of themselves with their boyfriends, saying this  was “a highly positive experience, adding to the fun of flirting or growing close to a boy”.

The girls are reported as saying that the experience only turned negative if the boy shared the image with friends, making them feel humiliated, inferring that a girl’s sexual reputation was still important to her. Well there is some hope.

So what lessons does the report’s author think need to be learnt from her fascinating findings?

No, not that all these girls should be taken in firmly in hand by their parents and schools – for their own protection; nor that they should be taught that such goings on are demeaning, degrading, self-damaging, shaming, morally reprehensible and totally socially unacceptable.  Of course not.

No,  her advice for all parents with teenagers is not to delve straight into their personal lives but to ask  them “more generally what they think is acceptable and unacceptable in a relationship, and to talk about these issues when they are aired on TV or in magazines.”  How nice.

Actually, how about delving straight into their personal lives without a moment to lose and  telling them what is quite, quite unacceptable?

Ah, but I must be careful what I suggest.

The NSPCC, the charity that is meant to protect children, thinks otherwise:  “The levels of victimisation revealed by this research show action is urgently needed by the government to make updated sex and relationship education a statutory right for every child and young person.”

Of course – how silly of me – that is the answer.

Let’s come full circle – let’s have more of the too much, too early sex education to solve the problem of the too early and inappropriate sexualisation of children it caused in the first place.

Share
Facebook
Twitter
WhatsApp
Email
Previous articleLuke Stanley: The hypocrisy of the EU’s demand for a female quota in the boardroom
Next articleReader’s Comment of the Day: A bland magnolia bus could be used by all three main parties