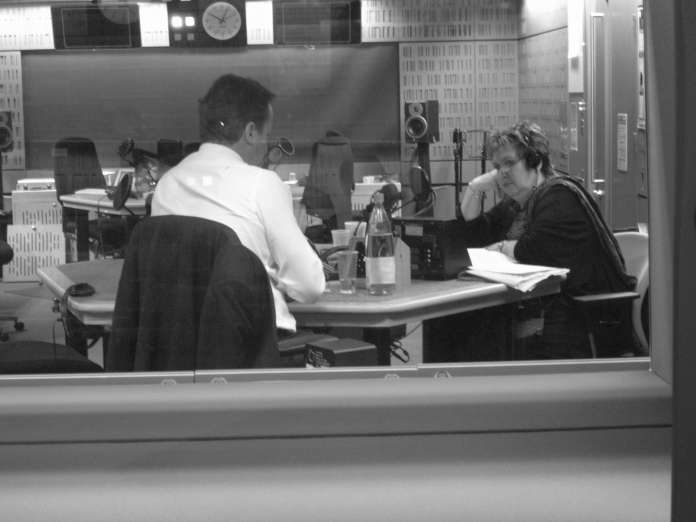 Political parties may come and go but Wimmin’s Hour is forever. You’d be forgiven for believing there’d been no election and that the wimmin’s favourite party had not imploded.  Jenni Murray and Co were last week still firmly ensconced on their hobby horse with the same predictable line up.

First up: Caroline Criado-Perez, English feminist and activist, thanks to whom we will soon see Jane Austen in a new light – on our banknotes. Criado-Perez, vilified on Twitter for her campaign, is presented as a woman we deserve to know about for showing us ‘what can be done and how to do it” when faced with this new literary genre of trolling.

Emily Watson too – awarded best actress for her gender equality declamation to the UN,  which included those sonorous lines, ‘I am a feminist too’ and ‘gender equality is your issue too’.

Then came BBC Newsnight’s very own gender appointment, political editor Allegra Stratton, someone from Equal Inheritance (do we still have primogeniture here?) and Liz Kendall MP on her bid for the Labour Party leadership.  All guests in a week which saw: the launch of the Woman’s Power list (again); the new women rape detective documentary;  women’s football world cup; and – last but not least – a celebration of  ‘18 Years Of A Minister For Women (and Equalities) with Tessa Jowell (former Wimmin’s Minister ) and the politically correct columnist Alice Thomson of The Times

Not one to be carried away by all this female success, Jenni Murray  sternly asked Dame Tessa Jowell over the top of her glasses how effective had she been in that role?

Not enough, she reprimanded her, for she hadn’t fixed the gender pay gap. Yes, piped up Alice , equal pay, forty five years after we were told we going to get it, hasn’t happened.

Our Tessa, never one to be phased, joined in exclaiming, “it has to matter, you have to accept that women are still discriminated against. You have to be a feminist!”

You really do have to, you see,  especially when the Minister for Women – now Nicky Morgan – does not have her eye enough on the ball, given that she also has the small matter of the nation’s education to deal with.

Tessa knows what needs to be done though.

“You need to collect the hard data about persistent inequality (because) it’s very important that government departments are very clear about existing differentials in the pay of women and men so you need that baseline data!”

According to Saint Tessa, we also need a legitimate culture on the shop floor where women can demand of their male counterparts exactly what they are being paid. Not a big brother culture but a big sister one.

Well I can’t help you with that Tessa, but I can save you a lot of trouble over your baseline data problem. It already exists, you see.

And there isn’t a problem. There’s no need for a new interdepartmental bureaucracy on behalf of women, just check with your former Department for Culture Media and Sport.  It has already researched it! There’s no need to worry!

Yes,  to get you (and Alice and Jenni) up to speed,  it examined changes in median hourly earnings over time and found, guess what,  that since 1997 the gender pay gap has shrunk. So much, in fact, that it doesn’t exist. And it was never as bad as it was made out in the first place.

Men, it reports, have seen their pay increase by 57.4 per cent over this period, while women’s wages grew by 74.5 per cent. In fact for women up to the age of 40, median hourly earnings rose faster than for people in any other group, increasing by 81.7 per cent, and as a result the pay gap for this cohort went down from 25.1 per cent to 12 per cent.(My italics)

So no, we don’t have the 20 per cent pay gap that campaigns like Mind the Gap would have us believe.  And Tessa and Alice if you are still handwringing over the plight of women and girls, hear this from Joanna Williams, education editor at Spiked and lecturer at the University of Kent, who is something of an expert on these matters:

“..what is less well known is that such statistics are arrived at by conflating the earnings of women of all ages, all occupations, and those in part-time and full-time work. The reality is that for people aged under 40 and working full-time, the gender pay gap is around zero; since 2009 women aged 22 to 29 have actually earned more than men.”

The bandied around pay gap inequity figures not only take no account of the generational effect but also ignore the type of jobs undertaken and women’s preferences. Simply, more women choose to work part time.

I don’t suppose however that any of this will bite with the wimmin. It doesn’t fit with their necessary prejudices you see. As Mike Buchanan of Justice for Men and Boys said to me, “Ah, the gender pay gap – harder to slay than a vampire!”.

His data here mirrors that from the DCMS. He says:

“The GPG from 18-39 is virtually zero (and slightly in women’s favour from 22-29). The pay gap after 40 is attributable to men investing more in their careers, working longer hours and so on.  The fact is that many women work part time whether or not they have kids, or simply don’t seek the better-paid stressful jobs (preferring to toil in the public sector rather than the private sector, being risk-averse compared with men).”

But on the Orwellian planet of Woman’s Hour their conclusion is otherwise. The real problem is that a Minister for Women is just not good enough.  The role has failed. She (it) was not powerful enough.

So nothing now will do but a full blown Minister for Gender Equality. And, no doubt when she can’t hold back the rising tide of female victimhood  – rape, FGM, pornography, you name it  –  Jenni will still be there to tell us what we really need. A Secretary of State with junior ministers for each and every new discrimination suffered by my persecuted gender in the UK?

Share
Facebook
Twitter
WhatsApp
Email
Previous articleRev Julian Mann: The kingdom of heaven is literally priceless
Next articleNick Wood: Liz Kendall is a relative unknown. But her call for profound change in Labour is right