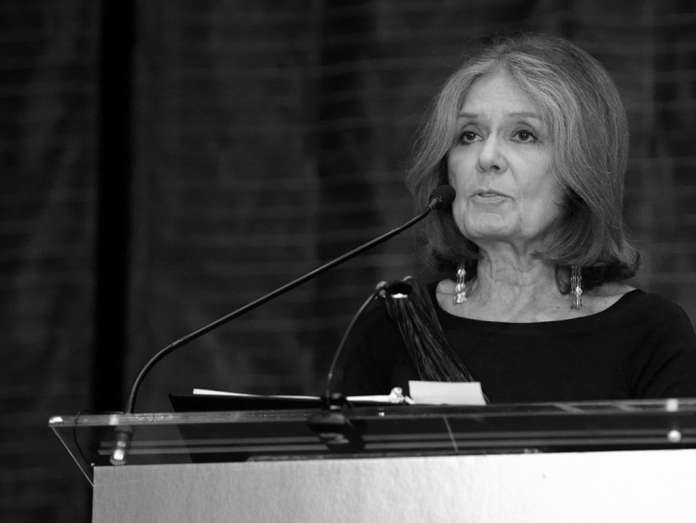 Did childlessness or an antipathy to children form Gloria Steinem’s barren feminism? Or was she unloved herself? I wondered about this as I read Jan Moir’s interview with her to celebrate her 82nd birthday.

Children simply do not feature in Ms Steinem’s world. She takes not one minute to consider them or how the fall-out from her feminist strictures has impacted on them. She reflects neither on the massive expansion of daycare that followed hard on the heels of ‘women’s lib’ nor the exponential rise of child and adolescent mental health disorders we are witnessing today.

Despite her age, Gloria Steinem strikes me as an immature woman, still at the centre of her own world – still the child or adolescent in Jungian terms –  still seeking experience to confirm her belief system.

Asked if she regrets her childlessness, Steinem says that even though: “I can feel the pressure to say yes. But I don’t and I never did”.

This is the only mention children get – apart from when she invokes the women having it all mantra – a career (what a revealing term) and a baby. They can’t she says, until men have it all too – career and baby.

No, adults and mainly women (men are lovers or helps) are the centre of Ms Steinem’s egocentric world. Babies and children are commodities that have to be looked after. And dad must take his 50 per cent measured share, even if this becomes a recipe for neither parent getting the career of their dreams, only a compulsory job share at work and at home.

But then Ms Steinem is a propounder not a thinker.

She is right that not every woman is designed to be a mother, even though all have wombs. It is also true some women never accustom themselves to their motherhood role and would prefer to forgo it.

But her injunctions on how to lead the liberated life have been aimed at a wider net than these relatively few exceptions.

And her aim has succeeded. Her ideas have shaped the lives of those women who’ve come to realise too late that their independence and then childlessness is a great grief and loss to them – one that takes a significant and conscious effort to overcome. Hence the burgeoning of new self-help groups for the growing number of 40 pluses who find themselves facing this – alone.

These women are the most unfortunate recipients of Steinem’s lifetime of barren advice – her rules that every women should live by – that has so shaped modern life.

It must make 40-something childless women want to scream that they ever fell for them and at society for this cultural imposition. I have sympathy. Back in my twenties and thirties I fell for them too – Gloria was glorious in my career world then. My escape was a narrow one.

Well to begin at the end, forget it. Clearly a lot of women do have regrets and they can’t all be the one and only rich and famous (conveniently married) Gloria Steinem to get over them.

You can forget turning old lovers into friends too – the chances of your still being in touch with former flings, most of which ended in acrimony or in never want to see again disappointment, are negligible. It’s pure fantasy land. Their new wives wouldn’t have much truck with it either. If you’d been such good friends, you’d have probably stayed together.

If you carry on playing the victim card, as La Steinem suggests, you’ll be opting for a sure fire way of alienating your remaining men friends. Though women have never had it so good – so many options and so many promotions,  that is what Gloria would have us women do. “Feminism has achieved a good deal” she opines, “but we still have a long distance to go.” No we haven’t.

Maybe in ISIL or Saudi Arabia we have, but not, I repeat not, in the Western World where women have never had so much positive discrimination.

It’s all very well telling women to live their own lives, Gloria, but this is a recipe for doing it on their own and unhappily. No amount of your indoctrination makes loneliness feel good. Female company, however hard we all try at it, doesn’t cut the mustard either. It does not compensate for the lack of a man in your life.

So if you are in your thirties with that biological clock ticking away (I remember how it felt) the last of her rules you should follow is: ‘make it all about you’. No, if you want a life and children, please don’t. Man is a social animal. Extreme individuality ends up equaling selfishness – or ‘me-ness’. Being aware of and sensitive to others is fundamental to good relationship forming. It’s what women in the past have been good at. Don’t throw this quality away.

Gloria’s less than glorious final injunction is to keep your own name. It sums up all that is wrong with her ‘asocial’ thinking.

Your name does not just confer your identity. It identifies those who created you and are/were responsible for you. If the price of so called ‘patriarchy’ is knowing who your father is and having him share the responsibility of your upbringing with your mother, well them I’m a fan of it. But the truth is that, whatever the propaganda, women have always made and shaped the world – for good and bad.

Taking your father’s then your husband’s name works and has done for millennia. The mother and child unit on its own, as we have learnt to our cost in recent years, doesn’t work.

Not that Gloria Steinem appears to spend a moment reflecting on that.