Kathy Gyngell: Humphrys’s BBC mindset blinds him to an end to Greece’s torment 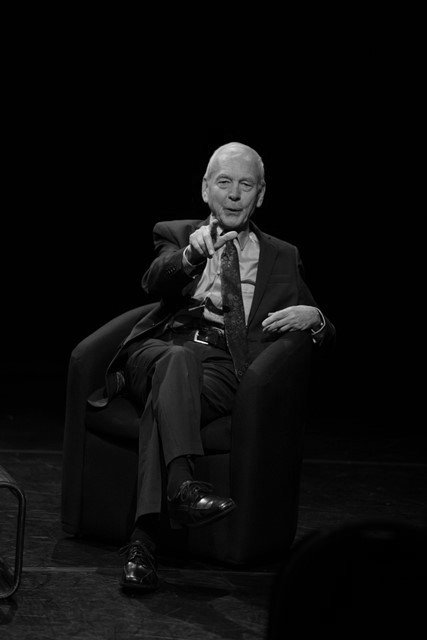 What’s the difference between John Humphrys and Charles Moore? Apart from the fact that one broadcasts for the BBC and the other writes for The Daily Telegraph.

They are both in their own ways amongst the most revered and respected champions of their respective worlds: the ‘fathers of the house’, so to speak, of broadcast journalism and print journalism. The difference is that one of them is expected to be impartial (he had his Sunday Times column ended on the basis of this BBC principle a few years back);  the other is paid to be opinionated.

Both, last week, wrote about Greece, its current plight and what, if Syriza won the election, this would mean for the EU? Well, Syriza did win last night, making their contrasting views even more pertinent.

Mr Humphrys tells us that Greece is his favourite country because his son and daughter-in-law live there.  Greece has held a special place in his heart ever since he and his son set out on their holiday home building Odyssey. Perhaps it is hardly surprising then that after a week in his beloved Athens prior to the election, he got so fired up.

Young people are jobless, homeless and angry, Humphrys reports. Married couples have to book hotel rooms by the hour to make love. Demands for IVF have become demands for abortion. This anger is what is turning them to politics for the first time – and in his view worryingly to “the upstart young left-wing Syriza party”.

Charles Moore paints an equally bleak picture: half all young people out of work, educated middles classes in daily soup kitchen queues and a pall of smog hanging over Athens from the burning of furniture to keep warm.

But there agreement between them ends.  Humphrys’s analysis of the Greek’s economic crisis reveals him for what he sadly is – an integral part of the BBC’s relentlessly pro-EU mindset. What’s amazing about his article is that the great man clearly thinks this is objective reporting – that’s why he has been allowed to write in the Daily Mail. Objective for Humphrys  and the Corporation but massively pro-EU for others.

His view was already set. In the Humphrys-BBC universe, there is no doubt who the villain of the piece is in Greece: who  brought it to its knees and laid low its proud, friendly people. The bankers, of course. It was vile Goldman Sachs who, through nasty corporate greed, caused their current woes. Not the EU itself or the misconceived single currency project. Never.

If Greece left the EU, he declares, it would lead to ‘economic hell’ across Europe and Britain would suffer too because of lost trade with a key market. In this, he echoes the mantra that we hear so often from Euro-fanatics such as Nick Clegg and Ed Miliband. This, of course, conveniently overlooks the fact that Britain could quit the EU and still trade with the Continent – as we did for centuries before.

Another fringe party gaining ground, Golden Dawn, is condemned, not for its neo-Nazi stance but because it does not like immigration. That’s BBC code for saying  it is just like Ukip and elements of the ‘right-wing’ backbenchers in the Conservative Party.  Oh, and they are also xenophobic.  They may be.  But again that’s code from the liberal left/BBC lexicon, this time for those who do not like the concept of the EU.

Humphrys concedes that the woes of Greece began with the eurozone but his reasoning is that they borrowed too much, and that foreign bankers then ran riot.  Again, he betrays at best selective vision, at worst massive pro-EU sentiment. He fails to bring into the equation, much advanced by critics of events in Greece,  the concept of the euro itself; the crackpot idea that economies as diverse as Greece and Germany could be welded into the same currency.

That is where, by contrast,  Mr Moore’s more temperate and  less alarmist analysis starts.  Far from writing off the far Left, Mr Moore says if he were Greek he’d be tempted to vote for the Marxist leader of Syriza, Mr Tspiras.

Why?  Because Greece is in an indefinite double bind if it sticks with its current policy.  Eurozone bosses incited Greece to borrow and spend madly and when it did so “decided to punish it to the crack of doom”.  The system will not let Greece go for fear of what might happen to Spain, Portugal, Italy and so on. Nor will they rescue Greece.

The internal contradictions of the EU – “The Great Unreason”, as Moore calls it,  in which Greece is “a troublesome and outlying territory and Germany is the dominant and most exacting power” in a colonially run Eurozone – are ones that appear not to exist in Mr Humphrys’s BBC/EU universe.

Humphrys is less worried that shoring up the euro and the EU project, while Greece continues to suffer, makes its ultimate break-up more explosive than he is about the “economic hell” to be unleashed when Syriza forms the next government.

Yet might not, as Charles Moore concludes, voting  Syriza in, heralding the collapse of the euro, open the way for a European Community built on cooperation not coercion?  And has not Syriza’s leader got a point when he says “We must end austerity so as not to let fear kill democracy”?

Letting fear kill democracy seems to me to be a rather apt way to describe the blinkered Mr Humphrys ill-conceived  cry on behalf of the country he loves.