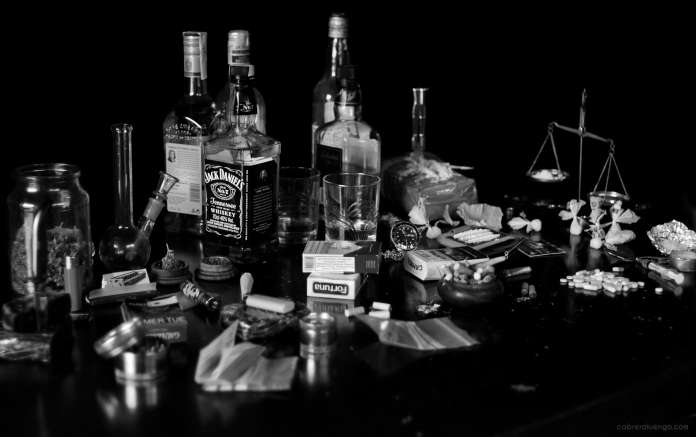 Noticeable for its absence from the referendum debate has been discussion of that great unmentionable – Scotland’s chronic drug and alcohol problem.

This is despite the fact that Alex Salmond has blamed the rest of us in Britain for Scotland’s particular legacy of alcohol and drug misuse .

Apparently it’s down to a lack of national self-confidence that being part of the UK has meant for Scotland. Yes, that is what he said.

So if the Scots vote Yes today can we look forward to its addiction problem disappearing in a puff of smoke from Edinburgh Castle?

Mr Salmond seems to think so, once Scotland’s national manhood is redeemed.

Frivolity aside, it seems this electoral gambit may have worked for Mr Salmond. For amongst those most galvanised, for the first time, to his nationalist cause are those highly underachieving males most associated with drugs and drink that Professor Ian Roberston drew attention to yesterday.

“I can only look on astonished at a social movement in which young, working-class men are particularly prominent” Professor Roberstson wrote, “… because such young men across the Western world have suffered a collapse in status, employment and self-esteem. The crisis in male identity is reflected in huge educational underachievement, burgeoning alcohol and drug problems, and high suicide rates. Millions of young, working-class men have lost many of their traditional roles in work – heavy industry and mining, for instance – and at home, where female-led, single-parent households are exceptionally common.”

Have they asked how he proposes to square their needs with his socialist, nationalist, feminist public sector dream ? Is he planning for them to man the universal childcare services he is promising, while their girlfriends go out to work. That will massage their male egos (I don’t think).

Neither, for all the media opportunities he and Nicola Sturgeon have had, have they  said how they propose to deal with Scotland’s most intransigent of problems, one that eclipses ours, this side of the border.

Drug stats tell a similar story. Two per cent of the adult population in Scotland today can be described as a problem drug user, in most instances, meaning a chronic heroin and/or crack cocaine user,  compared with 1% England.

Despite Scotland’s far higher health spending per head there is no sign that these problems are going away. In fact they are still on the increase. In England, by contrast, it is a problem on the wane. Drug deaths are going down in England and Wales – 1,496 in 2012 (continuing a downward trend seen since 2008 when deaths peaked at 1,939). Scotland’s drug deaths  however have continued to climb overall. 581 deaths in 2013 is one third the number of England and Wales for a population less than a tenth of its size (5.3 million).

The impact on Scotland’s cities- particularly Glasgow – has been devastating. As in previous years, three quarters (75 per cent) of those who died in Scotland last year were male, over half  of them (57 per cent) lived in the most deprived areas and the 25-44 years age group accounted for around two-thirds (67 per cent) of the deaths. Over a third of them were parents.

Shameful though it is, it is no wonder neither ‘Yes’ nor ‘No’ campaigns have competed over solutions to this problem. It has been the great unmentionable of the referendum debate. Neither side have shown interest, or offered an answer. That’s if you discount the magical act of independence.

But  if Salmond had offered 72 virgins to his nationalists he could have hardly done better for his campaign.

Like the would-be jihadists, I fear his new nationalists are doomed to disappointment.

Share
Facebook
Twitter
WhatsApp
Email
Previous articleNick Wood: It took a Vulcan to expose this constitutional vandalism
Next articleLaura Perrins: If the Scots quit, Dave should go with them