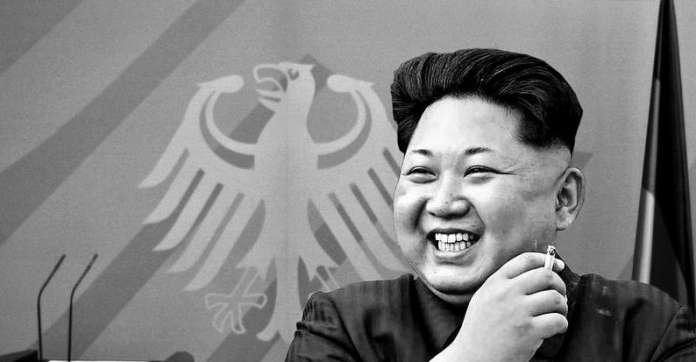 (JP Floru is a writer and author who has written extensively about political economy in the Far East. ‘The Sun Tyrant’: A Nightmare called Korea is his most recent and most daring book. At considerable risk to himself he kept a diary on his recent visit to North Korea. His account of this benighted country is enough to wipe any final vestige of a smile off one’s face. Its Supreme Leader Kim Jong-un is far from a joke.

Shown by two minders what the regime wants them to see during their nine-day trip, the group JP travels with is amazed to see people bowing to their leader’s statues, the empty five-lane motorway and the ‘missing’ fifth floor of their Yanggakdo Hotel on an island in the Pudong River. Explanations only arrive through his extensive research of the few sources that exist about this hermit country. His book has to be read to be believed.

Here I ask JP what took him to North Korea, what he saw, how he dared to write and what he thinks the West should now do about a regime second only in barbarity to Pol Pot’s Cambodia, yet one of far greater threat.)

Kathy Gyngell: When, how and why did you first become curious about North Korea? Were you seeking an opportunity to visit the country? Or did it happen by chance?

JP Floru: Three London friends were running the Pyongyang marathon and asked me to come along. I said: “Yes, sure, as long as I don’t have to run it!”. In school I was the kid who sat on the bench during PE lessons. So they ran the marathon, and then there was a nine-day guided tour on top.

I’ve always been interested in bizarre countries. For example, this January I spent one month on Easter Island to see whether there was a book in that – but there wasn’t – it’s a very small place, and rather boring. No such boredom struck in North Korea. I had not intended to write a book about it, but within two days I decided to write one and I started keeping a diary. North Korea is the strangest place one can travel to, apart from the moon.

KG: You describe – even for you as a tourist – the climate of terror and oppression the country operates under. Did you write any notes /observations while you were there? Or did you write from memory afterwards?

JPF: I kept a diary in my native Dutch. I asked the minders whether I would be able to keep the diary and they said “yes”. It was not checked on our way out of the country when the officials went through our phones, cameras, and luggage. I was also careful as to what I put to paper while in the country, just enough to remind me of what I really had seen.

KG: Was there ever a moment, given the fate of the American Otto Warmbier, that you thought you might not make it back home?

JPF: Some in the group I was with were scared. You are very careful as to what you say. You can’t even be sure that somebody in the group isn’t a plant. There is no doubt the regime is paranoid enough to do this. Instilling fear, as we found, is what keeps the regime in power. They make everybody so scared that you self-censure, and you don’t even try to be rebellious. Is taking a photo of this illegal subject worth being sent to the concentration camp for, for example? Every time you wonder. It almost never is!

KG: Some of what you observed you must have expected – what of your experiences there most took you by surprise?

JPF: Political classes for six-year-olds? We went to a primary school and were taken into a class with cute yellow tables and tiny chairs. On the walls were photos of Second World War Japanese soldiers bayonetting women and children, and of planes throwing bombs on villages. This is where children are taught who their class enemies are and who they should hate. At the age of six.

KG: Did you sense that your guides/minders were fearful or were they ‘confident’ in their indoctrination? Do you worry for them now?

JPF: If you cause trouble, they will be punished, too. We knew that. After a few days you become quite friendly, so you take greater care not to bring them into trouble. But perhaps we should not have been so scrupulous. The minders are loyal to the regime, otherwise they would not obtain such lucrative jobs dealing with foreigners (lucrative in that small tips from us would have dwarfed their salaries). All the jobs in North Korea are handed out by the government, and those who are most reliable get the better jobs.

But there was quite a difference between the different minders. The minders allocated to our group seemed human and quite normal. In the UK they would probably have been perceived as middle class professionals. But the other group had quite horrible minders, who berated the travellers, and would constantly go through their photos and delete them.

Did they believe what they were telling us? We will never know for no North Korean would risk being sent to the concentration camp for confiding in a foreigner he or she has only met five minutes earlier.

JPF: It is pretty close to Maoism at its worst. Stalinist oppression too – after Stalin died North Korea became distrustful of the Soviet Union, which they considered too liberal! But it is not as bad as under Pol Pot in Cambodia. In Cambodia one third of the population was killed by the Marxist regime. In North Korea about 10 per cent of the population died from starvation cause by Marxist policies in the 1990s. One per cent of the population, about 240,000 people, are in concentration camps. But with its total absence of freedom one could say that the entire country is a prison.

KG: Was it unique in its method of repression and control of its population?

JPF: If you make a joke about The Great Leader, not only you, but also your entire family up to three removed will be sent to a concentration camp. That means you, your parents and grandparents, brothers and sisters, children and grandchildren. So nobody dares do anything to oppose the regime. Then there are regular executions of high ranking generals or ministers, usually conducted in public and demanding the compulsory attendance of the population. Again, this is enough to make everybody simply too fearful to try anything. The regime also kills possible dissidents abroad and in as spectacular a fashion as possible such as, for example, when Kim Jong-un had his brother killed by throwing a poisoned towel over his head at Kuala Lumpur airport. Again, this is done to send the message to possible dissidents worldwide that: ‘we can come and get you; wherever you are’.

KG: You describe America’s, Russia’s and China’s attempted policies of containment as ones of ‘pacification’ which fail each time and, worse, sustain North Korea only to be more repressive and more threatening. Can you explain how this has worked?

JPF: Every so often North Korea ratchets up tension in South Korea: by missile testing or deploying troop movements, for example. They know they cannot win a war against the West, but Kim Jong-un knows he can cause a lot of misery. He regularly threatens to reduce Seoul to ashes! In the West, lives matter but not to Kim. The South Korean stock exchange doesn’t like tension at all either. So each time the West starts a fresh round of negotiations it ends up sending mountains of food and material aid in return for North Korea reducing it rhetoric. It has worked every time; it is a very lucrative pastime for the North Korean regime.

KG: Is Trump right to despair of China acting to change North Korea?

JPF: China could change the regime overnight as virtually all North Korea’s trade is with China despite international sanctions. It is unwilling to consider harsher sanctions, quite liking to annoy the US in this part of the world and to keep the US busy. Furthermore,  China certainly doesn’t want South Korea, and therefore the US army, at its border. So its awkward cousin is kept in place and China looks good by comparison while South Korea and the US are kept in check. It works for China. Perhaps China will realise one day that it could be even more successful if it got rid of this awkward cousin.

KG: What would you advise Mr Trump to do if you were called into the White House. Is there moral case for surgical and decisive action and should this be acted on sooner rather than later?

JPF: To keep 25 million people in near-slavery (the North Korean government even hires its workers out abroad in order to pocket their pay) is immoral, inhuman, and cruel. When does non-intervention become complicity? That is the question. Trump should try to convince China to let go of the Kims, perhaps threatening to intervene militarily if they don’t. They could even consider sending in a UN force including American and Chinese forces.