Kathy Gyngell: Loopy Green MP Lucas won’t save the planet. She is even battier with her crazy plan for a drugs free for all 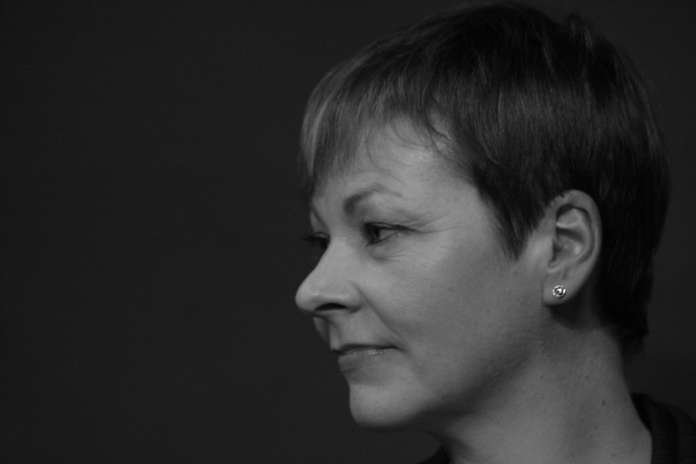 Caroline Lucas has finally got her debate on drugs law reform in Parliament today.  An e-petition supported by none other than the messianic Russell Brand got her the 100,000 signatures plus she needed for Parliament’s Backbench Business Committee to approve it.

It seems it was Russell’s promise to “snog” the 100,000th signatory live on Channel 4 News that’s allowed her call for ‘a sane evidenced based drugs policy’ debate. You couldn’t make it up.  This and the intervention of Nick Clegg.

So how do their mutual ambitions for reform stack up on a sanity meter?

First they want the Government to order a cost-benefit analysis and impact assessment of the Misuse of Drugs Act 1971 within the next 12 months.

They must know how easily abused such an exercise would be – especially if handed to the one of ideologically ‘harm reduction/legalisation’ universities to conduct.

When MPs join the debate and listen to Caroline Lucas’s pearls of wisdom, they should be aware of how flawed they are and how misled she has been by her pro drugs legalising pals.

She asserts drugs policy should be a health issue and not a crime issue.  This is far from profound. It is a straw dog.   Drugs policy already is dominantly health led – ever since the Labour governments doubled the numbers of addicts in treatment year on year and poured literally billions into their methadone substitution project – one that’s caused as many problems as it solved.

In fact, Government spending on drug treatment eclipsed spending on prevention or enforcement years ago, as I wrote about at the time.

It has also escaped the sole Green MP’s notice but the average drug user, rich or poor, is rarely ‘criminalised’.

Compared to the ten per cent or so of the 85,000-strong prison place population doing time for drugs trafficking (rarely possession) offences, the British taxpayer funds  200,000 drugs addicts in treatment, according to National Health Statistics UK.

I am not sure what more Ms Lucas is looking for.  Russell Brand in his more lucid moments has indeed advocated for more abstinence based residential rehabilitation places. But that does not require any change in the law. It just requires some enlightenment on the part of an intransigent Department of Health addicted to prescribing more drugs as a solution. No change in the law is required for that – just a change in culture and attitude.

The case for a health led policy is, pure and simply, a device for decriminalisation that no self-respecting MP should fall for.

These are contrivances of cynical campaigners like the toke-smoking multi-billionaire businessman Sir Richard Branson who misleadingly argues that ‘a law and order approach’ drives the problem beyond the reach of the authorities and encourages crime.

Au contraire, as the Brixton decriminalisation experiment proved beyond doubt.  It was the absence of law and order containing lower level street use and dealing that dramatically drove crime and hospital admissions up

It is startling how the advocates of drug legalisation never bother to take a rain check on the facts. Speaking at the Liberal Democrat conference, Deputy Prime Minister Nick Clegg described current drugs policy as “idiotic”, and vowed to scrap prison sentences for possession, in his 2015 general election manifesto.

Clearly, he is blissfully unaware how very few sentences there are for possession (let alone for first time possession). As  parliamentary questions have revealed in the past, the number of people receiving custodial sentences for simple drugs possession is very small.

Why these few were selected for imprisonment and the rest not suggests a long previous record, a combination of this offence with other crimes, or a very large quantity detected.

Just two of them, repeat two, received the maximum sentence of seven years (three years six months, in practice). The others, 11,396, received ‘other sentences’, most likely drugs rehabilitation requirements.

Even for the more serious crime of *supply* of Class ‘A’ drugs (supposedly so serious that the maximum sentence is ’life’ in prison, which of course doesn’t mean anything of the kind),  774 out of 2, 530 convicted offenders did not go to prison at all, let alone for life.

David Burrowes MP recently asked about the number of  offenders sentenced last year to immediate custody who were given the maximum sentence for any Class A, B or C drug offence.  The reply was four. Yes,  four.

Ms Lucas thinks too that the UK could learn more from Portugal and some US states, where possession of some drugs has been decriminalised.

Well we could certainly learn how to become a pot head’s paradise from Colorado, where the smell lingers in the air.  It’s not something I would think most MPs would inflict on their family or friends. No wonder America is beginning to change its mind about this brave new doped up world,  given the rising catalogue of ill health and crime in Colorado alone.

A new poll out this week from the Pew Research Center finds that support for marijuana legalisation is down and now stands at 52 per cent. Opposition is up 3 points. This follows the Public Religion Research Institute poll that found support for legalisation nationally had slipped from 51 percent last year to 44 percent.

As for Portugal, where Russell Brand happily assured his followers that children’s drug use has gone down since decriminalisation of personal drugs possession, the truth is that it has doubled. Anyone can check the ESPAD database if they don’t believe me.

There isn’t. There is rather a lot of evidence that it has worked rather well, worldwide and nationally.

Worldwide consumption of drugs today at around 39 tons of morphine equivalent  is a fraction of the past. At the turn of the 19th and 20th C before the Harrison Act and the Dangerous Drugs Acts of the USA and UK, it was more than 3000 tons.

Drug controls – the ones that the Nick Cleggs of this world chose to describe as ‘prohibition’ or as the (failed) ‘war on drugs’ have kept drug use to a fraction of the drinking and smoking consumption. Compared with the 2 billion drinkers worldwide and the 1.3 billion smokers, there are only 185 million drug users. That’s less than 6 per cent of the world’s adult population.

In the States, apart from marijuana which has been effectively decriminalised, drug use has declined dramatically since the late 1980s, cocaine use dropping by 75 per cent in 25 years, not least as a result of a network of drug courts that give treatment, not custodial sentences.

Here drug use remains at even lower levels:

Cannabis use by teens and young adults is in steady decline – it has dropped a third in the last 15 years. Only 8 per cent of adults in the UK took any drug ever in the last year of data.That’s down from 12 per cent ten years ago.Only 6 per cent or so are regular (last month) drug users

Why on earth then would anyone want to sign up to the crazy premise of the Lucas/Brand/Branson debate?  It would remove the threat of these successful and necessary sanctions on drug use and, so doing, would dramatically increase the very harms they claim they want to stem.