Kathy Gyngell: The President’s sulky daughters deserved their dressing down. Pity the messenger got shot 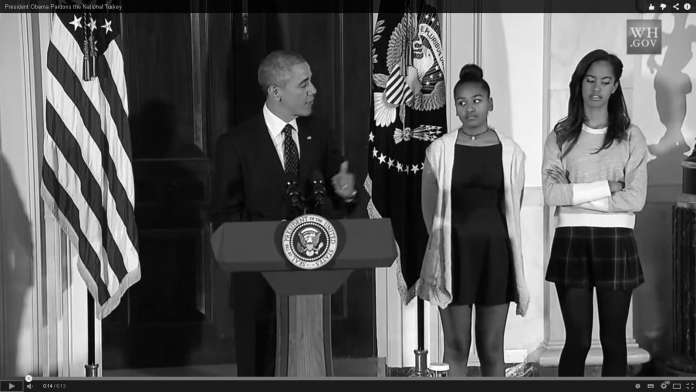 If I were President of the United States of America – quite a stretch of the imagination, I appreciate – and my sons (now 28 and 26) were sixteen and thirteen – the age of Barack Obama’s daughters, Malia and Sasha, I would not have had them standing by me as I gave my Thanksgiving Day speech.

No siree, not even if they begged for the privilege.

It’s not just that they’d have put me off (they would), but the last thing I’d have wanted (for their sake) would be for them to be in the public eye any more than necessary – particularly not at this age.

Nor would I have needed, just before addressing the nation, a row with them about their clothes.  At that point of their adolescence, if my memory serves me correctly, my sons were prone to wearing jeans with the crutch hanging precariously somewhere between the bottom of their bottoms and the back of their knees, their Calvin Kleins exposed over the dangerously dropping belt line.  Not an attractive look, and even worse from behind.  Getting them into a school suit was a challenge.

To give them their due, they wouldn’t have been seen dead on a public podium with me either, not even if I’d said, ‘Hey dude, I’m cool about how you look’.  Which, believe me, I never would have been.

Not so President Obama.

Clearly young Malia and Sasha were given the three line whip to appear by his side during his prime time Thanksgiving TV outing. They looked about as glum as the turkeys to which their dad was giving the annual “pardon”.

“We may have had to do this,’ the expression of one read, “but you’ll be sorry you made us”.  The other’s attitude was just,  “Am I bovered?”

All I can say is that they looked defiantly ‘Eastenders’.  They might as well have picked their attire straight from Donna Yates’s market stall.  Their faces read, “We’d rather be feared than loved”, and, “I take after my mum so don’t mess with me”.

Yes, they certainly invited comment.  And they got it. Elizabeth Lauten, a Republican spin doctor, who didn’t think much at all of their “teenage” attitude, decided to criticise both it and the parenting responsible for it on her Facebook post.

Why not?  After all, what on earth had possessed Obama to plonk his daughters in the public eye in the first place – especially given the claim made by his wife, Michelle, that “(they) try to protect them from too much of the public voice”.

And then what could he have been thinking of, allowing young Malia and Sasha, to dress,  as Ms Lauten remarked, as if they were heading for a bar?  What possessed him to think this family reality TV would win him street cred, which is the only possible motive for his desire to display them, boots and all, that I can think of.

“I guess you’re both in those awful teen years, but you’re a part of the First Family – try showing a little class,”  Lauten wrote, as though to them. “At least respect the part you play.”

I happen to agree with her. Tough it may be to be the daughters of a President,  but that’s the way the cards have fallen. They should learn, conform and dress appropriately – not just for the occasion but to what people expect and hope.  If they are not respectful of their father’s role and office then who will be?

The fact is that all adolescents need to learn respect (something very different from demanding it)  and that consideration for others and conformity  when required is the foundation of respect and of civility.

The Obamas, above all, should know this and know their duty to set that example.

But perhaps as Ms Lauten suspects  their daughters are,  “… coming up a little short in the ‘good role model’ department.”

Well she paid for her candour.  Twitter trolls have demanded her resignation. Even our own Daily Telegraph went  ‘po faced’,  reporting this as  “an online rant that will go down as one of the more ill-judged attempts at political public relations of recent years”.

Faced with a backlash of criticism, poor Lauten has admitted the error of her ways.  She’s apologised to those she has offended and in cultural ‘re-education’ mode has “pledged to learn and grow from this experience”.  All for a bit of refreshing plain speaking.

Can this be the United States of America, that land of the free?  North Korea surely.

When the truth  hurts is when it is needed.  If it is silenced in America then the game is up.

Share
Facebook
Twitter
WhatsApp
Email
Previous articleChris McGovern: British values do not extend to thought police in the classroom
Next articleLaura Perrins: Advent prepares us for Christ’s birth. A perfect excuse to turn off the liberal idiots of the Today programme