Kathy Gyngell: Spare us the PC drive to plaster feeble women’s sport all over TV 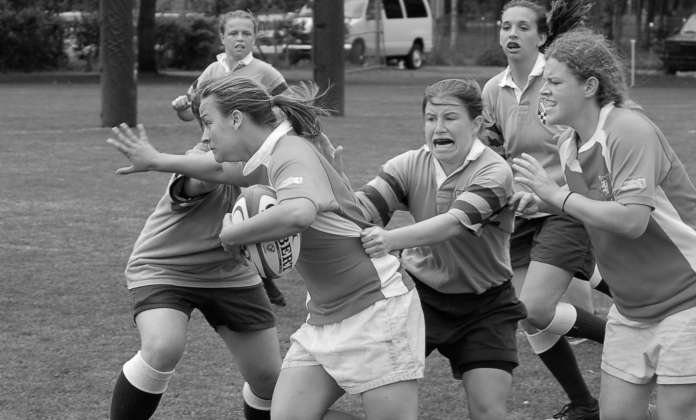 Who really wants to watch women’s sport? I appeal to you. Own up! No one, except the mums, dads and siblings of our latter day would be female football and rugby stars. Not even Sepp Blatter, though he once claimed he wanted to see the numbers of women playing football grow by 50 per cent.

Catch him watching them? Very few of his questionable millions have gone their way. That’s the measure of its real market value – interest in it. Actions always speak louder than words.

If people dared be honest they’d admit that neither women’s football, nor cricket nor rugby, has any takers – apart from the lasses who tog up to play.  Without the bullying BBC and every other feminised outfit pushing it down our throats, no one would be talking about it.  But never fear, the feminist front of women’s sport more than makes up for its lack of fans.

I have had had it up to here – to drowning point – frankly.  First, we had women’s cricket paraded before us on the sports spot on BBC Radio 4’s Today programme all summer long.  Even Sky Sports was at it, devoting precious sports minutes to inane coverage of a wimmin’s Ashes in Australia.  Who cared?  No one! I don’t know what the cricket-loving chaps thought but I was ready to scream. It has certainly been enough to undermine the confidence of the men’s team. They don’t know who they are or how they should behave. No wonder they keep throwing wobblies or descend so easily into defeat. Soon they will be victims too.

Talk about a far cry from the Brian Johnston (Johnners) cricket of my younger years. He was single handedly responsible for my teenage love affair with English cricket and cricketers, and the rest of the world’s cricketers too. It was all so quintessentially English and male – and yes – virile.  I must not get nostalgic about the past I know, but it was such fun to listen to on a summer afternoon – just listen to this classic interchange between him and Jonathan ‘Aggers’ Agnew. A bit better than sitting in front of a laptop or mouthing to nowhere on your mobile phone remote as is the want of today’s teenagers.

Back to the present. If compulsory women’s  cricket was not bad enough, we got the Women’s World Cup too this summer. Milo Yiannopoulos couldn’t have spoke a truer word when he said: “The only thing normal people care less about than women’s football is serious discussion of women’s football — a fact that seems to have escaped the media, who are celebrating this feminist triumph like it’s Armistice Day or the Potsdam Agreement”.

Quite. Watching it is hopelessly dull; get it please BBC sports editors.  That is  because of the scientific fact that women are significantly underpowered when it comes to reaction times and stamina — i.e. the two things you need to be a good footballer.

So where  does that leave women’s rugby?  Who really wants to watch a woman who looks like she could kickstart a jumbo jet, but actually neither has the power nor the strength of a man?  Don’t argue. If she did have surely she’d be pressing to play in a same-sex team.  Strangely, I haven’t heard that that’s on the feminist sports agenda.

So why are we being made to pretend its something to celebrate?

This exhortation from my alma mater headlined ‘Historic Match at Twickenham’ demands just that. A “Don’t miss your chance to celebrate women’s rugby at Twickenham!”  dropped into my email box this week with a picture of beefy girls hugging each other. Book your ticket today, time is running out, it exclaimed. I don’t think so somehow,  although I bet it is a different story for the male Varsity match.

If Murray Edwards College girls or any other Oxbridge girls want to play rugby, good for them. I’m all for it.  By the look at the flab on too many of the girls gracing both these ivory towers, exercise certainly needs encouraging.

But I’ll be damned if I’m going to be bullied by polite, PC approved, public opinion into ‘celebrating ’ it.  I refuse to. Why should I? Male rugby is bad enough, looking to me like two packs of charging rhinoceroses. Women’s rugby – all snort, mud and grapple without the power – is so much worse. If this is  ‘ingrained prejudice’ on my part I am the Pope.

So surrender, capitulate, cede defeat you wimmin for all our sakes. Play sport as much as you want, but BBC, Sky, The Guardian, Oxbridge Colleges, I beg of you stop forcing us to pretend women’s sport is the same as men’s. It isn’t.