Kathy Gyngell: The burkini ban is France’s defence of its liberal culture 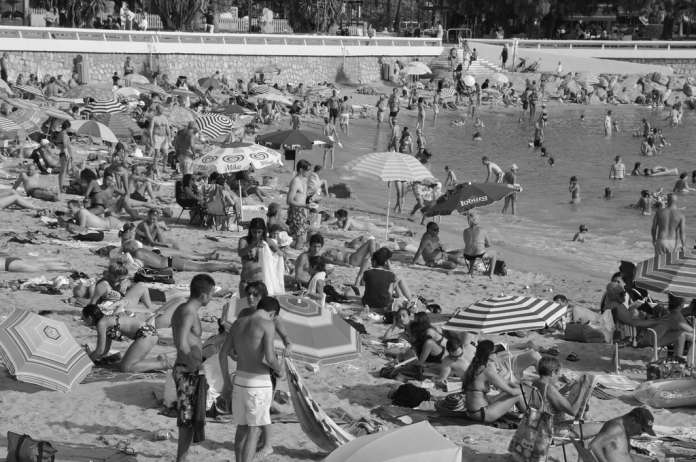 It could have been the stuff of a French farce. Armed police forcing a plump middle aged women to take off her blue (not even black) top off on a boiling hot South of France beach.

Except it wasn’t. It was deadly serious. The French have had enough.

Baring your flesh and your sexuality is as totemic of French Mediterranean culture as wearing the full burka is in certain Middle Eastern (but not all Muslim) communities. Cannes and Nice are where you go to be topless, not to be enveloped. They are proud of it.

Some commenters tried to pretend the burkini was not really the problem – it was politicians fiddling while Europe boils, Douglas Murray opined in The Telegraph on Saturday. No actually. Burkinis, burkas and hijabs are very much the problem – they are political as well as cultural statements. The problem is also the media’s hysterical and hypocritical reaction to their banning.

Dress codes matter, as any anthropologist will tell you. They tell you all you need to know about a culture and its values. Nothing is more symbolic or symptomatic – more so even than food.

The fact that traditional Western dress codes have all but disintegrated in recent years doesn’t mean they have disappeared. They are just different. The least dressed you can be (given a svelte figure) is now not just socially acceptable, but for celebrities, it is de rigueur.

In the name of women’s rights, scantly clad women cannot and must not be criticised for inviting lewd or unwanted attention.

At the same time – and at the other extreme – in the name of health the people’s police in Australia enforce maximum cover up. Woe betide the mum who lets her child run naked on the beach under the baking sun. Ignore the ‘slip, slop, slap’ rule and you are a social pariah. Long sleeved, long legged swimwear topped with a Legionnaire’s hat must be conformed to.

Today a third of Australians now suffer from Vitamin D deficiency. Health is the Australian’s new religion – just like ‘modesty’ and female repression is part of Islam’s.

Dress codes, like food rules may be irrational, distasteful, provocative and even contradictory but they are always meaningful and mostly symbolic. They set and signify the markers between purity and danger. Any society has a common and instinctive understanding of their own symbols and this in turn represents and articulates the social order (or lack of it) and rules (or lack of them) of that society. What may seem benign to one culture may seem quite threatening to another.

You do not have to be unenlightened, a racist or a fascist to find the burka and the niqab threatening. To the West they represent female repression and patriarchy; they threaten notions of freedom and openness. No doubt Western clothes – or lack of – are deeply offensive and threatening to many Muslims.

Colours have different meanings too. Black in the West signifies death, it is associated with funeral dress.

Privately many Westerners admit they dislike the Burka and acknowledge in varying degrees, that they find it frightening or intimidating. But modern Western politically correct thinking forbids us from saying so. We dare not be deemed racist or phobic.

Yet there is no doubt that the burka and burkini symbolise a repressive culture and a treatment of women very much at odds with our society and our ‘values’.

But as our values become ever more relative, Islam’s seem to become ever more absolute. As our dress codes have loosened up metaphorically speaking, theirs have not just tightened but become a weapon of modern identity politics.

No wonder the French picked on the burkini to reassert their national and cultural identity. This East West culture clash is about power and the burkini is its totem.

What else is left to rally to but nudity? For all we talk of Western values, we’ve repressed our own Christian symbols, stifling them with outbreaks of liberal outrage.

Remember the Christian British nurse who took her case to the European Court of Human Rights to establish her right to wear a cross at work? The case she lost.

I can’t remember the Daily Mail’s Sarah Vine, or any other writer for that matter, arguing this had ‘chilling echoes of the Nazis’.

Which brings us back to the misplaced, inconsistent and hypocritical media criticism of the French burkini ban – the fact that the burkini is a symbol worth defending, but the Christian cross is not.

We find feminist writers, who were silent on the question of the Christian nurse, leaping to the defence of the burkini cover up – if you can get your head round that one. Janice Turner admittedly goes round and round the mulberry bush to project the ban as a betrayal of Western freedom yet not as a representation of the enslavement of women.

Isn’t it just wonderful how fast moral relativism is turning feminists into social conservatives – on this matter anyway – in order not to upset Muslims’ ‘freedoms’. Never mind that the freedom we are talking is men’s freedom to repress women.

This no doubt is how feminists justify not choosing to take on Islamic ‘enforcers’ who live in our midst, who attempt to enforce sharia law here, or the Muslim patrols who harass couples from holding hands or rough Muslim girls up in the streets for not wearing headscarves. It must be why they refrain from challenging the misogynist male members of the Deobandi sect who keep their girls deliberately ignorant of modern science and Western thought.

Predictably, the debate on the burkini on the BBC’s Today programme last week failed to explore this angle, turning it instead into an issue of choice (not, let me be clear, the issue of Islamic cultural and religious denial of freedom of choice). No, an inverted freedom of choice, recast in Western feminist terms that Mishal Husain reported, was threatened by racism. Her key interviewee, Nadira Mahmoud, complained that she has stopped wearing her hijab after being racially attacked. Another announced she wore her hijab with pride.

From being a symbol of cultural repression, Mishal Husain miraculously transformed the burkini ban into an (anti) woman’s rights and identity issue. The message was as perverted as it was clear: those fascist French authorities have developed a jack-boot intervention that prevents Muslim women deciding what they want to wear and freely expressing themselves. Really?

No. What the French police are doing is articulating what the French are thinking – which is about establishing whose is the dominant culture and who should accommodate whom. Following the recent series of brutal terrorist attacks, is it surprising that the French would want to see more assimilation and integration of Muslim populations into the French nation and identity, not less?

The media may roll their eyes in the air, but the public knows that dress codes don’t just define your culture, but are a symbol of power – one you give away at your peril in face of a less accommodating culture.