NewsPaperthe art of publishing
HomeKathy GyngellKathy Gyngell: Time for British women to stand up to the feminist...
30

Kathy Gyngell: Time for British women to stand up to the feminist thought police 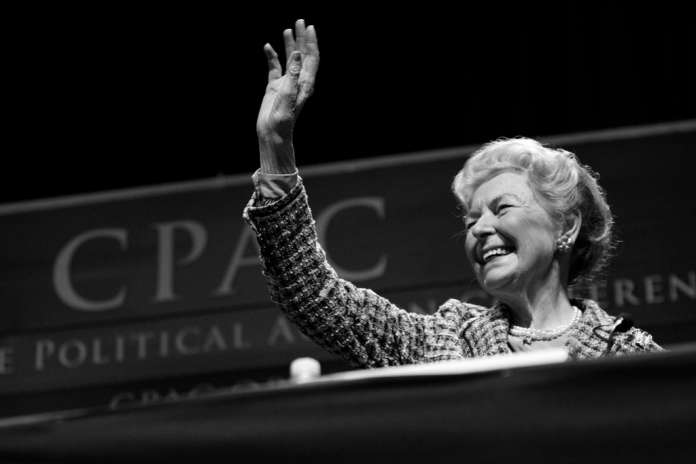 Since setting up The Conservative Woman, we have been asked more than once: ‘so where are the conservative women, then?’

Understandably so, we concede. If the comments on the site are indicative, then by far the majority of our readers are men. Apart from Busy Mum, Tricia and one or two other honourable exceptions, our potential women readers have gone to ground, are in hiding or have been so bullied into the prevailing feminist ideology they dare not read the site at all.

The death last week of Phyllis Schlafly, the firebrand critic of American feminism, made me ponder all this. Why, I wondered, is she nigh on unheard of here when she was, and still is, a household name in the USA? Why does America ‘allow’ an anti-feminist to be a heroine whose views and actions are worthy of respect, when such a women would be abhorred and shouted down here?

We all know the answer – why she has no counterpart over here – she would have been laughed out of court, treated as an eccentric or ignored. I know, as a ‘known’ social conservative and full-time mother lobbyist, I am more an ’embarrassment’ than an asset in political circles.

Schlafly’s advocacy for traditional marriage and child rearing, for the idea that women were already well looked after and needed no more rights – all accepted ideas in Republican circles in the USA – here in the UK have fallen on stony ground, whatever the colour of the party in power.

Yet in the USA, as their leading anti-feminist, as the chief antagonist of the Equal Rights Amendment, as a woman who fearlessly made the case for maternal and uxorial virtues (which she herself balanced with raising and breastfeeding her six children) Schlafly won status and standing as well as opprobrium in her obituaries, even in the left-leaning Economist.

It was that, of course – the respect she won, her sheer fame – that drove women of a rigid political bent so mad that some still raged in response at her death: “When conservative activist Phyllis Schlafly died last week”,  one said shamelessly, “I was among the many liberal writers who didn’t hesitate to call her a hatemonger”.

The  feminist fury directed at her even in her death   goes to prove the continuing influence of Schlafly’s brand of conservatism in the USA.  Her social policies, that were her direct response to the advent of feminism and to its impact in the 1970s on popular consciousness, are still propounded.

She took up arms against the Equal Rights Amendment and against pro-ERA feminists in the 1970s, articulating a definitive and alternative stance on women’s rights, and she never let up.

She fought feminists like Betty Friedan on their own turf, arguing that the ERA was “a direct threat to the protection that mothers and working women enjoyed in American society”. She was proved right. Women’s lot has not improved without the protection of relationships.

Her mission centred on the very reasonable proposition that we hold dear at TCW (vive la difference) that men are men and women are women. The feminists’ demand for total conformity was not symptomatic of true liberalism, she said,  rather of their intolerance – a piercing critique that drove them to fury.

Thanks to her for all the ‘liberal’ transformation of the United States, American feminists could not and did not stamp out her influence or analysis.

But the sad fact is that there has been no woman to compare with her in the UK. The political and social environment since the 1970s has been more oppressive and more hostile to dissent. Organisations, like the Full-Time Mothers lobby group that I founded, were not just thwarted by an already feminised establishment, they were also weakened by their own membership, fearful of feminist disapprobation, fearful of being tarred as old fashioned – lacking clarity, conviction and courage.

Conservative women, the Conservative Party has decreed since the days of Margaret Thatcher, must be modern women, pro abortion, pro sexual freedom and non-judgemental of lifestyle. This has hardly helped. There has been no room for ‘old-fashioned’, stay-at-home mums. Not if the Tories were to steal Labour’s clothes. They had to be conventionally pro childcare in order to liberate oppressed women into the embrace of the workplace. Like their Labour sisters they have had to demand parity of outcome in all that suits them.

Even Thatcher, who kept herself out of the feminist debate, I suspect  would have struggled with someone like Phyllis, never mind this lady’s significant intellectual and political abilities.

You could argue, as did the Spectator’s Professor Patrick Allitt, that Schlafly could not impede the vast social forces that have transformed the United States – that divorce, contraception and abortion are all widespread.

But you can equally argue that she was a force to be reckoned with to her death, and that she more than kept the flame of social conservatism alight – to the point that the tide against ‘progressive liberalism’ may be finally starting to turn.  And that she remains an inspiration to the counter-revolutionaries.