Kathy Gyngell: Ukip confidential. Farage is being hijacked by the liberal Left over family policy 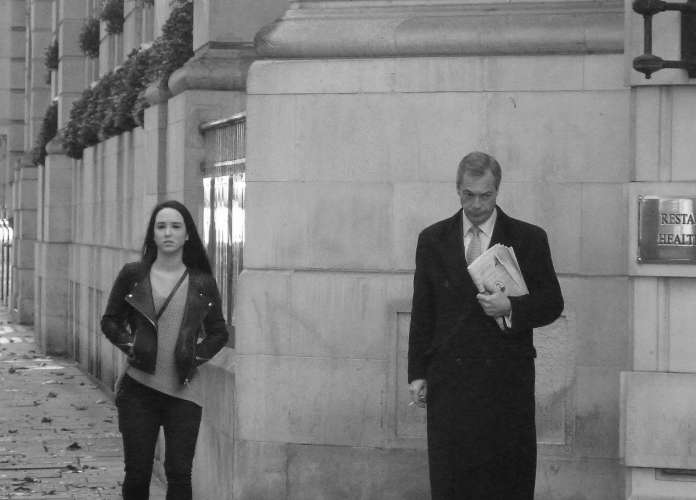 Stop press. Ukip stands for nothing on the family. The family  does not even register on the list of  things Ukip says it stands for .

You can find a rather worryingly entitled  ‘Welfare and Childcare’ on a longer list on its ‘policies for people’ web page.  But no mention of family, still. And quite what this combination is meant to imply is anyone’s guess.

The few lines boil down to support for existing Conservative policies – welfare cuts (except the bedroom tax, which Ukip disapprove of), restricting  child benefit to children permanently resident in the UK, and limiting it to the first two children (Iain Duncan Smith’s latest offering to the benefit debate).

Only one sudden and very specific commitment – to an initial presumption of 50/50 shared parenting in child custody matters and grandparents to be given visitation rights – is new.

But what of the unbroken family – that bedrock of society – that endangered institution?  Perhaps their recent libertarian converts don’t care?  Is  a debate raging in Ukip’s inner sanctum between family conservatives and libertarian individualists over society’s and, for that matter, Ukip’s future?

We (meaning social conservatives) need to know. It will affect how we vote – even more so now polling predicts Ukip may become a ‘real’ party and overtake the increasingly unreal Lib-Dems.

You – Ukippers – really need to think long and hard about this, and I would recommend it should be outside the establishment box.

We really want to know if  you are deliberately avoiding all mention of family taxation (yes, the one which currently penalises married families with stay-at-home mums) and that scary topic,  the transferable tax allowance. We are wondering if  you  would rather not mention marriage at all – let alone its virtue of providing family stability and its economic worth to society?

Or just like all the other ‘family friendly’ parties, are you blind to this?

Given the welfare dependency and other economic and social costs of cohabitation (and its breakdown) you might have thought it worth paying some attention to.

I just wondered whether your leader Mr Farage has  been more cowed than he’d admit by the accusation that his party wants to turn the clock back for women’s rights.

With 30 Westminster seats in prospect is he thinking he’d better draw a veil over what feminists deride as his ‘dodgy’ record on women’s issues – their view that ‘women everywhere should be worried about the ascent of Ukip, especially those of us of a child-bearing age”?

Did the Telegraph’s Wonder Women  response to Godfrey Bloom’s assertion, that women should not expect maternity leave or pay from businesses, really get to them? Or maybe  Nick Clegg did land an effective punch when he repeated, during his European elections TV debate,  the claim that Mr Farage had said females with children are “worth far less” to employers in the financial sector.

Well, it’s a shame if Ukip has been scared off. These are serious arguments that deserve honest debate, in terms of babies’ needs and employers’ rights as well as women’s rights too. It’s an even worse shame if a group if self-appointed “wonder women” have scared the Faragists off developing a radically different family policy, for fear of encroaching on the thorny topic of women’s rights.

Has it become a minefield they dare not enter? I hope it hasn’t. It would make a mockery of their defence of free speech.

But not just that; unless Ukip is brave enough to discuss a radical revision of family policy many of their other aspirations will fall by the wayside – not least their aspiration of care and support for all.

Getting family policy right is just as important as ‘returning powers to the UK’; as ‘protecting our borders’. It is fundamental to ‘rebuilding prosperity’ and to ‘safeguarding against crime’ too.

The strong, economically competitive and prosperous ‘Global Britain’ Nigel Farage wants is necessarily a capitalist one. That makes it totally dependent on re-strengthening and reasserting family ties and responsibilities – and the policies which will promote this.

Tim Montgomerie makes this vital point in this critique of the US-based Pew Research Center’s massive international survey of attitudes towards capitalism and equality. If the advanced economies of the West had the family networks of the developing world they might be more resilient.

Weak family structures are what have powered the growth of the western world’s overburdened welfare states, he says. It’s expensive to put so many children into state-financed childcare and elderly people into taxpayer-financed homes. Indeed.

Ukip needs to be truly radical and think outside the box.  It must look at reversing the State dependency of 4/5ths of all families that Labour brought about through it so-called ‘tax’ credits system. It has to look at ending expensive one option childcare subsidies, in return for notional work, and set families free.  Instead, it must, unashamedly, through tax allowances promote marriage and support responsible families. Relieving  families of those responsibilities via  state subsidised institutionalisation of children makes no more economic than it does social sense.

The family is a subject Ukip can’t dodge for much longer. If it is sidetracked  into an unwinnable debate about women and their rights (who will will spend most on childcare?) they will be lost.

They will be lost too if they let the frighteners be put on them about ‘the women’s vote’.  There is no one-size-that-fits-all woman, whatever Alison Wolf says here. Many women are increasingly cynical about the main parties’  indistinguishable staple of childcare, the euphemism for taxpayer handouts for families dreamt up by feminists and left wing ideologues.

It’s one politically correct blind alley  Ukip must not be tempted down.