NewsPaperthe art of publishing
HomeKathy GyngellKavanaugh, mass hysteria and the Salem witch trials all over again
80

Kavanaugh, mass hysteria and the Salem witch trials all over again 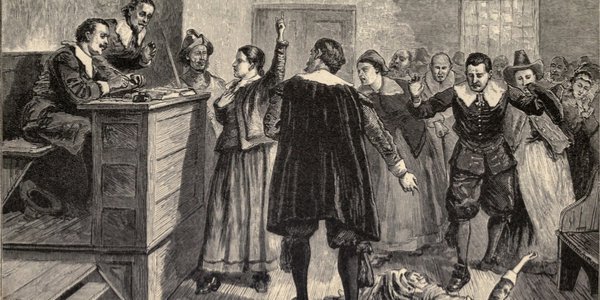 Anyone who thought Brett Kavanaugh’s Senate show trial was over or that he’s now set to scrape through to the Supreme Court must think again. By close of play on Friday, despite Dr Christine Blasey Ford’s patent lack of credibility and absence of any corroborating evidence, the terrorised Republicans capitulated and agreed to an FBI investigation of ‘the sexual assault allegations’. What a farce.

This is no Nuremberg, no International Criminal Trial for the former Yugoslavia; it is not the trial of a former concentration camp commandant, nor of those responsible for the mass graves of Srebrenica, though young people might be forgiven for so believing.

What they are seeing, elevated to comparable importance by the media, is a dubious one-off sex ‘abuse’ charge, of #MeToo provenance and of the sort from which anyone can now claim to be a ‘survivor’.

Only in today’s narcissistic world could there be so much currency in presenting as a victim of bad or ill-judged sex. If the ‘status’ granted Dr Ford is its new measure, then you have only to be groped at a party to claim this and count as a ‘survivor’, no matter how unproblematic your life since the regretted fumble or touch-up.

And Dr Ford is bringing them out of the woodwork. Open any newspaper. Turn on any TV or radio station.

You’d laugh at this parody of suffering and debasement of language were it not such an insult to those who have endured real torment.

Anyone who thinks Dr Ford is either courageous or credible, the two other absurdly abused and misused words of the week, needs their head examining.

If she’s a victim of anything, it’s the Democrats, the feminist Left and the collective sex hysteria they are driving that’s disturbingly reminiscent of the Salem witch trials.

Two hundred were accused, nineteen of whom were found guilty and executed by hanging (fourteen women and five men). One man was pressed to death for refusing to plead.

He, not the person who pointed the finger of accusation at him, was the courageous one.

Today we are seeing a reverse of these trials by ordeal – the demonising not of 17th century so-called witches but of 21st century white males.

Brett Kavanaugh has been ‘pressed’ until it was hoped he would break. That he hasn’t is no thanks to the Republicans. That even Donald Trump did not take on Dr Ford says all about the extent of surrender to the new feminist terror.

No one dares speak the truth – that being subjected to a forcible ‘touching up’, real or imagined (a misdemeanour not a crime) is not grounds for victimhood; that victimhood (real or alleged) does not accord you a special status in law.

That’s the Leftist myth propagated and weaponised by#MeToo that even the Republicans have bought into. That and the concomitant presupposition that the accused must take responsibility for another’s ‘self-identified’ ‘trauma’.

This is what this media circus hinges on, not just on the credibility of an allegation that was not reported or mentioned for 36 years, not even to a best friend; for which there is no corroborating evidence, about which the Republicans have startlingly failed to pin the ‘principle’ down, incredible though that all is.

This is the explanation for why we are even in the crazy game of discussing the credibility or otherwise of Dr Ford.

And be under no illusion, she is not credible. Here is a description by American Thinker’s Patricia McCarthy of the 52-year-old but childlike Dr Ford:

‘She spoke in a child’s or baby girl voice, which rose in pitch at the end of every sentence as though she is unsure about the validity of her own words. She was at times cheerful and giddy which was off-putting, given the reason she was there: to shatter a fine man’s life’s work. She has travelled the world but had told the committee she was afraid to fly.’

Allegedly at the mercy of two boys who locked her in, how was it that once she rolled off the bed she ran out, as she says she did? Who opened the door?

This was but one of the many things she did not say and was not asked. Intact, fully clothed, without even a bruise and without asking, let alone screaming, for help she got down the stairs and away.

Unstable maybe, but honest? No. Dr Ford is not that. It is not normal to cultivate and remember trauma in the way the witness has done. False memory is a symptom, not a cause, of mental ‘damage’.

Dr Ford looked weak, yet relished her victim heroine status, smiling happily whenever praised for her ‘bravery’ as would a child. McCarthy describes her as in a dissociative state, as reciting a studied script, as though she had been hypnotised.

That is how she came across, astonishingly unable to remember the place of this allegedly traumatic event. To this day – and I am older than Dr Ford – I retain a clear memory of the venues of my bad as well as my happy teenage sexual encounters.

To consider her as in any way credible or deserving of our sympathy, other than for her ruthless exploitation by the Democrats, is to suspend disbelief. Yet this is exactly what her feminist fan club, so 100 per cent sure as to what happened in this unknown room at this unknown event in an unknown place, have done.

It can only be put down to a mass sex hysteria. This self-indulgent and out-of-proportion pathologising of regretted encounters or what Germaine Greer rightly calls bad sex, which puts it on a par with true horror – such as systematic drugging and raping of children across far too many British cities – is not just irrational. It is dangerous.

We buy into this lie, that the most liberated and affluent of contemporary Western women – the most ‘empowered’ in history – are the lifetime victims of institutionalised white male brutality, at our peril; at risk of the death of truth, civil society and justice.