NewsPaperthe art of publishing
HomeNewsKen MacIntosh: Why don't feminists get real and support the death penalty...
107

Ken MacIntosh: Why don’t feminists get real and support the death penalty for rape? 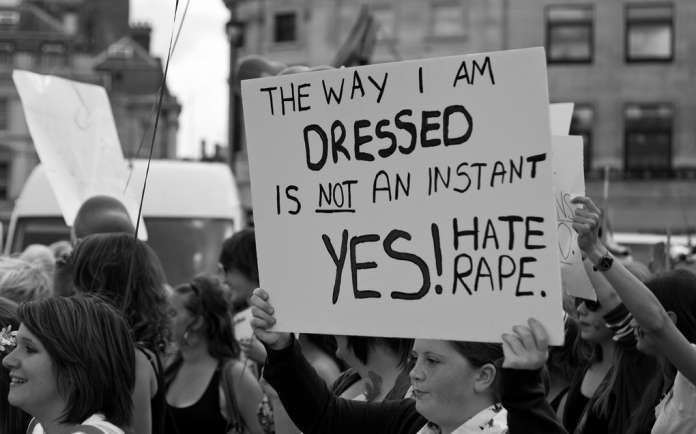 Saturday saw a couple of thousand feminists march through London as part of the ‘Million Women Rise’ protest. Many of the participants carried placards reading “together we can end male violence against women”. The Guardian enthused that “thousands of women marched through central London … to call for an end to violence against women and girls”.

One wonders who, exactly, these messages are directed at. The rapists themselves? Do these marching women believe in the existence of reasonable rapists who might be swayed by such pleas? One would guess not. What the protesters are in fact implying (by very dint of making such pleas) is that there is an extant swathe of public opinion that runs contrary to the view that rape is a bad thing. They are implying this because such a reality would make their own movement very necessary, a bulwark of decency against savagery. That this implied mass of rape-approving people does not actually exist is irrelevant. The protestors’ demands are made for auto-consumption; they are self-serving.

In suggesting that such widespread contrary opinion abounds (those dark societal undercurrents that feed so-called ‘rape culture’), the protestors fuel their own outrage. At the same time, their central demand that all sexual violence ends is something that no sane person could possibly argue against (though many might challenge feminist assertions about the prevalence of such crime). As such, the outrage that they express is unimpeachable. It is a rage that cannot be hindered or argued with. It is a ‘free pass’ outrage. This is compounded by the unattainability of their demands (an end to all depraved male behaviour forever). The protestors provide themselves with a source of indignation that is both inexhaustible and unchallengeable. It is theirs, to keep in a box forever. To use whenever they wish.

People tend not to campaign for the impossible. Nobody, for example, has ever agitated for ‘an immediate end to all forms of human dishonesty (including all lies)’. We might all want this, but we know that it will never happen. To campaign for the impossible is like singing a lament to feel a bit better. It is, at best, therapeutic. Likewise, the howl of outrage heard on Saturday’s march, demanding an end to all violence against women, was little more than a political form of primal-scream therapy.

Dear Protestors: Let me mansplain this to you. When it comes to stopping rapists, put something useful and applicable on your placards. Demand something do-able. Call for a specific course of action, the efficaciousness of which will be measurable. I suggest that you all turn, for inspiration, to the most loathsome feminist of them all – Andrea Dworkin. Ok, so Dworkin believed that all heterosexual sex is a form of oppression, but, as the saying goes, even a stopped clock… etc. etc. Dworkin supported the death-penalty for rape. So, listen up, protestors! Don’t wave about banal, fluffy placards demanding that loveliness flourish. Demand that the death penalty flourish, and that it be applied to those found guilty of heinous sex crimes. Campaign for the State to dish out punishments that might actually frighten sex-beasts into abstaining from their vile predilections.

Ok. So the notion of militant feminists calling for a return of the death penalty may make many among us feel uneasy. The thought of a bunch of intersectionality-obsessed man-haters with death in their eyes is discomforting. Images spring to mind of roadsides lined with mile upon mile of crucified men, à la Spartacus, transgressors of ever wider legal definitions of what constitutes ‘sexual assault’.

But here’s the thing. Were organisations such as the ‘Million Women Rise’ march to proclaim hearty support for use of capital punishment against the worst sexual deviants, they would surely begin to expand their appeal beyond the usual collection of ‘Millie Tants’ (dreadlocked white women who write blogs cataloguing millions of ‘micro-aggressions’). Out would go the professional victim class, to be gradually replaced by normal women.

Women who like receiving compliments from men, or who sometimes read The Sun, or work in Greggs the bakers, or behind the counter in William Hills. Swathes of women who would never usually pay the slightest bit of notice to ‘campaigns against sexual violence’, but who would joyously pursue rapists and paedophiles to early, unconsecrated graves. In short, small-‘c’ conservative women. They could take over the movement, rendering it both sane and way more effective at fighting rapists. In one stroke, mad feminists would feel disempowered and rapists would be that much closer to being dead. It would be a ‘win-win’.

But we know that the Million Women Rise march (and organisations like it) will never accept such foul right-wing opinions. Because the Million Women Rise march isn’t really about getting things done. It is about demanding the impossible so that grievance will never end. It’s about giving perma-campaigners an outlet to burnish their virtuousness in the company of identikit liberal pals, whilst partaking in self-congratulatory Saturday-afternoon demonstrations/picnics. It is an inchoate howl of injustice, within which a certain type of woman may bask, luxuriating in an enervating fury. These marchers need to grow some balls and support the death penalty. But they’ll never do that. Because balls are bad.