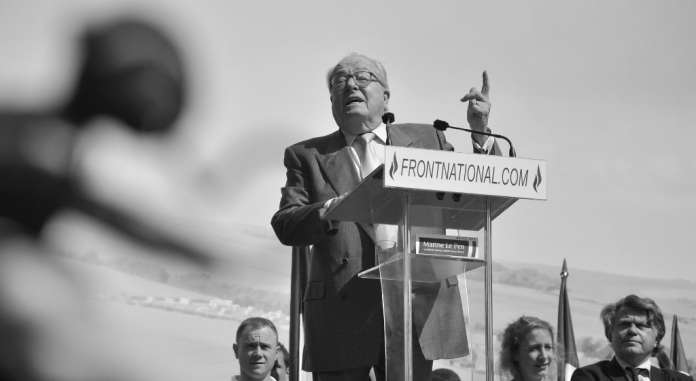 The former leader of the Front National in France, Jean-Marie Le Pen, was convicted of Holocaust-denial by a court in Paris last Wednesday and fined £25,000. Holocaust-denial has been illegal in France since 1990. In 2012 it also became a crime to deny the Armenian Genocide.

It is understandable why people would wish Holocaust denial to be banned; the evidence for the Holocaust’s scale is incontrovertible. Goebbels himself wrote, “The Jews have deserved the catastrophe that has now overtaken them”. It must cause intense pain to survivors and their descendants to see a smirking connard like Le Pen dismissing such a vast crime as mere “detail”. However, the criminalising of Holocaust denial harbours potential dangers.

The philosopher John Stuart Mill wrote that, “Even opinions lose their immunity, when the circumstances in which they are expressed are such as to constitute their expression a positive instigation to some mischievous act”. For Mill, only speech that leads directly to ‘mischievous acts’, within an immediate situation, should ‘lose its immunity’ from prosecution. Though French anti-hate-speech law does not focus on location, it does however continue to reflect Mill’s concern with the consequence of a statement in determining its illegality: it is an offence to “provoke discrimination, hatred, or violence toward a person or group of persons because of their origin or belonging to a particular ethnicity, nation, race, or religion”.

In other words, people shall not use speech to make bad things happen. If Holocaust denial is an attempt to provoke negative outcomes against a particular ethnic group, then it should be prosecuted under the above law. A law which identifies certain speech, in and of itself, as bad is a law which removes ‘consequence’ from the rationale. This is a great leap from utilitarian notions of free speech. In reality, the ban on Holocaust denial is an understandable attempt to protect a group from experiencing emotional hurt. But as a rationale for determining which speech may or may not be permitted, protecting hurt feelings is subjective and open to abuse.

To outlaw certain comments, irrespective of whether they can be proved to be mischief making or not, is to cause a small fracture to appear in the concept of free speech. It becomes ‘nearly free speech’. And fractures tend to get bigger over time. A precedent has been set in people’s minds: If ‘their’ area is ring-fenced from certain comments, then we want ours ring-fenced. And hence, raising questions about the scale of the Armenian Genocide now becomes illegal in France.

Every nation and people have their own historical calamities (dwarfed though almost all are be by the magnitude of the Holocaust). Should it become illegal to dispute the numbers of Africans who were killed as a result of the slave trade? Or argue over how many died in Rwanda, or Cambodia, or the Great Famine in Ireland, or the Bengal famines, or the numbers of Muslim civilians massacred in The Crusades? Should 9/11 ‘truthers’ be silenced by The Law? Who would wish to be a historian in such circumstances?

But even if the criminalising of Holocaust denial never causes any of the above scenarios to come to pass, does it actually serve a positive function? To allow free speech on the subject draws cranks and crypto-Nazis out into the open. Once there, they are exposed to argument, and the subsequent contempt heaped upon them for being unable to counter that argument. Had Le Pen always been silent about his dark, nasty thoughts, the ‘real him’ hidden from view, might he not have been more successful at elections?

Underpinning the French ban on Holocaust denial lies a condescension: that The People are stupid and cannot be trusted, they will hear Le Pen and believe him, discounting the vast amounts of evidence to the contrary. The French state believes that it must shield The People so that they don’t fall under the spell of hate-filled demagogues.

But those who would fall under Le Pen’s spell are those who already agree with him. They are people gripped by bigotry. And on a practical level, in these days of internet access, how can any views be truly suppressed? People can seek out whatever like-minded souls they choose to on their computers, and together they can fulminate, unchallenged, away from prying eyes.

Prosecuting Le Pen confers a victim status upon the would-be aggressor. It feeds into the deranged conspiracy theorising of the far right, and yet it does nothing to stop that theorising from happening. So why risk the purity of free speech by placing these first tiny cracks in it, no matter how well meaning they are?