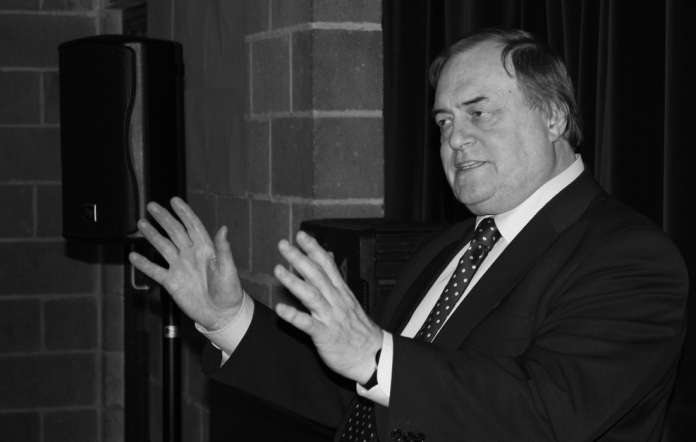 I was never a big fan of John ‘Two Jags’ Prescott. He was in Tony Blair’s government, after all. But I will forever have a grudging respect for him after he punched an egg-throwing protestor in the face. For all his imperfections, it is hard to imagine Prescott being subjected to workplace-bullying.

Not that there is anything wrong with being bullied. It is not (usually) a sign of weakness, merely misfortune. People who experience such behaviour should report it. Make a big deal of it. With one exception… politicians. Or rather, those politicians who aspire to take leading roles in government (which is most of them). Being bullied is not a good look for a would-be Prime Minister, Home Secretary or Foreign Secretary. In moments of national crisis we do not want to be turning for leadership to somebody who was made to cry by John McDonnell. If a list were to be compiled of the prerequisites of an ideal leader, ‘not having been bullied’ would be pretty near the top. That might sound tough, but we live in a world full of those who would bully.

[Cut to the following scenario: Vladimir Putin sits at a negotiating table. As the British team approach, a Putin adviser leans in to his leader’s ear and whispers, “And here comes the British PM. He was recently bullied terribly by the teenagers who support Jeremy Corbyn … President? Sir? … why are you cackling demonically?”]

For that reason I have devised the ‘Prescott-Test’. The test simply requires us to imagine a given politician being bullied, and then consider whether that thought seems ridiculous. If it does not, then we might assume that the object of our musings is never going to effortlessly fill the role of leader. The test is not a measure of a politician’s propensity to resort to physical violence (à la Prescott), but rather, of their self-possession. I realise that in naming my test so, I may create the impression that I regard John Prescott as being a paradigm of leadership, but no. Just of the non-victimy part.

To prove the test’s worth, apply it to big political fish of the past. Imagine Margaret Thatcher being bullied. See as she is reduced to tears, her head bowed, tormented by some angry, needy nonentity. What indignities might cause her to buckle in this way? I’m guessing it would have to involve actual physical pain; psychological tactics just wouldn’t cut it. Perhaps she is being caned incessantly across the back of her head as she tries to conduct her constituency surgery. Which would make anybody cry. And isn’t really bullying, just assault. Let’s face it, we can’t imagine her being bullied.

Norman Tebbit? Imagine a young Tebbit retiring to his office to cry tiny, little tears into a small, pink, crocheted handkerchief when all of the awful shouting and name-calling gets too much for him. Yeah, right. Tebbit probably didn’t even have a cry after the IRA nearly blew him and his wife to pieces at Brighton. Although, I reckon that I could beat Tebbit in a fight, now that he’s 103 years old. Possibly.

Or what about the Old Left? The Bennites, the Dennis Skinners, the NUM, SOGAT. Love them or loathe them, they fought like hell. They were the bullies. By contrast, much of the Parliamentary Labour Party of today are the bullied. Labour whip, Conor McGinn, has revealed that Jeremy Corbyn bullied him by threatening to complain about his politics to his father, a Sinn Fein councillor (which would, admittedly, be quite scary). This was followed by complaints of intimidation and harassment by former Shadow Chief Secretary, Seema Malhotra, who claimed that John McDonnell’s staff had illegally entered her office. And recently, forty-five female Labour MPs sent a letter to Corbyn accusing him of failing to stop “disgusting and totally unacceptable” abuse committed in his name. Back in Glasgow in the eighties I do not recall Mrs Thatcher ever being referred to in a way that was not disgusting and totally unacceptable.

I have no reason to doubt that these claims are true and that they have been distressing. However, to voice them publicly is, I believe, misguided. If the anti-Corbyn brigade wins the party leadership election, and all of these victims assume control of Labour, it will mean that our official opposition will be comprised of people who get bullied. They will become estranged (even further) from those qualities that make politicians appear viable in terms of leadership. I know, that’s easy for me to say. I’m not the one receiving all the abuse. And it’s true: if I were in their position I would be complaining from the rooftops. But that’s why I’m not a politician; I’m a thin-skinned softy.

Those sane Labour MPs who are opposed to Corbyn should drop the bullying complaints (unless actual assault or criminal damage has occurred). They should project imperturbability, show that they cannot be bullied. Pass the Prescott-Test! I would love to see just one appear on camera, fix the viewer with a steely gaze, and say of the ‘Momentum’ rabble: I will fight these louts, dreamers, Trotskyites, adolescents, terrorist-sympathisers and Britain-haters with everything I have got. I am doing this for myself, my party and my country. I don’t care if it ends my career. This is what I believe in.

I would vote for that.