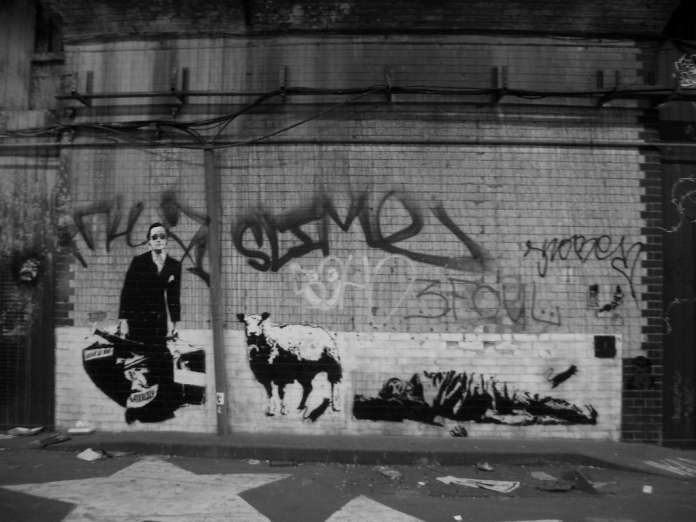 The physicist Paul Dirac once said that the point of science was to make the complicated sound simple, whereas the point of poetry was to make the simple sound complicated. Had he been around today he might have added, ‘and the point of ‘street art’ is to make simpletons sound complicated’. Radio Four’s documentary Graffiti: Paint and Protest (broadcast Monday), a breathless paean to the majesty of men who deface other people’s walls, did nothing to lift the image of said ‘artists’, investing them with none of those insightful qualities usually associated with those we identify as artists.

The programme began by interviewing French graffiti-artist Blek le Rat, ‘father of stencil-graffiti’ and formative influence on British street-artist, ‘Banksy’. Monsieur le Rat has painted pictures of soldiers holding little children. This was part of his ‘war is really bad’ series. However, his signature motif is, as his name suggests, the rat. He explains of his rats (which he daubs on whatever he so chooses) that they represent the manifold problems that lie just below the surface of French society. “I wanted”, he says, “to say to the people, you live in a beautiful city [Paris] but don’t forget that the basement is full of rats”. Le Rat is deciding what we, the public, must remember. The arrogance of this remained unchallenged by the programme-makers.

What, we might wonder, are the problems to which le Rat alludes? Domestic violence? Drug addiction? Loneliness? Racial strife? All of them? Which begs a second question: to whom does le Rat feel it necessary to illuminate such problems? What human being does he imagine as having no inkling into the existence of these issues? The previous recipient of an ice-pick lobotomy? Le Rat must be congratulated for making art for people with head injuries.

The documentary then moved to Barcelona, where a member of the ‘Open Walls Project’ wants to “reclaim” some of Barcelona’s walls (so as to paint on them). Reclaim them from who? The owners? ‘Reclaim’ suggests some prior state, now lost, which should be recaptured. At what point did the walls not have owners? Did they somehow exist prior to the expense of construction – magical, pre-physical walls that must now be returned to those who feel like drawing on them? The artist, lamenting the illegality of scribbling on walls, opines, “Where is the people’s voice, where is the communication?” I dunno. Everywhere? On the internet. In conversations. In public spaces. In magazines. Graffiti might have a place in situations where freedom of expression is denied, but in Barcelona?

Another Catalonian street-artist, who goes by the name of Roc Blackblock, we are told, “paints massive murals which take up entire walls”. Blackblock, a socialist agitator, explains himself thus: “I never consider if I have the right or I don’t have the right [to paint on walls]”, a curiously individualistic and self-centred approach for one with communalistic sentiments, but then, hypocrisy never did overburden artistic lefties. He goes on, “the walls are there and they should speak… A place to dialogue with other people”. As opposed to having actual dialogue with other people who want to have dialogue. How does one have a dialogue with a painting that takes up the entire side of a building? There’s nowhere left to paint a response.

The documentary then continued its misty-eyed world tour of vandalism by taking us to Sao Paulo where a different explanation is given for the local brand of graffiti, called Pixação. Referring to the impoverished backgrounds of the artists, the presenter intones: “All they really want is to … say, I am here and I exist”. An explanation used by the guy who assassinated John Lennon. As explanations go, it’s open to abuse. However, it is better than the twaddle offered by the European graffiti-artists. Blek le Rat, for example, states that he began vandalising things as a form of “therapy” because he was lonely. Get a teddy bear.

The documentary’s narrator did, eventually, give the game away when he states of the Brazilian graffiti style, “[the vast majority of the public in Sao Paulo] don’t seem to get [it], let alone accept it. They see it as ugly, destructive, meaningless vandalism, certainly not as art”. And with that should end all plaintive argument in its defence. Most people don’t like it, end of. And yet it is thrust down people’s throats and celebrated. It is a form of anti-socialness. It is the pounding stereo at 3 am. It is the fly-tipped tumble-dryer by the roadside. It is an obscenity-filled conversation shouted down a mobile-phone on the train. It is arrogant and invasive. In lauding such a topic, Radio Four at best appears as some dad trying to get down with the kids, and at worst as a gullible promoter of an in-yer-face me, me, mine destructive narcissism.