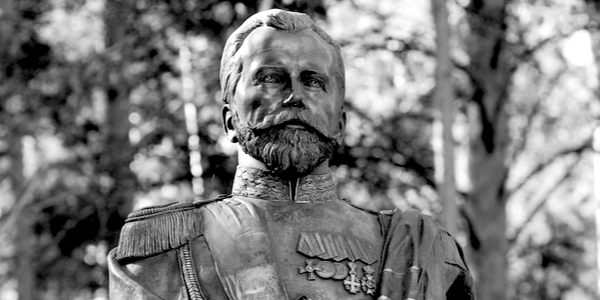 HISTORY, on the whole, has not been kind to Tsar Nicholas II. Perhaps with good reason. His belief in the autocratic right of the tsar to rule Russia may have suited the pre-industrial age, but by the early 20th century it was an anachronism.

In the run-up to the Great War, Russia had one of Europe’s most rapidly growing economies. Despite this and the abolition of serfdom decades previously, Russia’s political and social system was ossified, unable to deal with growing clamour for reform.

The 1905 Revolution failed, but it led to Nicholas II begrudgingly acquiescing to constitutional reform. This he spent the next decade trying his best to undermine, simultaneously dragging his heels over other vital reforms. Perhaps tsarist Russia’s last hope died with Nicholas’s prime minister, Pyotr Stolypin, who was gunned down in 1911 at the theatre in Kiev.

Nicholas was ill-suited to be tsar in a Russia on the cusp of modernity. He had the common flaw of confusing working hard with working intelligently. He would spend hours sifting minutiae while avoiding the great questions of state, instead relying on the time-honoured belief that as grand Orthodox ruler of Russia he was beloved by the peasant masses.

In some measure his autocratic bent is understandable. His grandfather, Alexander II, was a great reformer. However, for his endeavours he was assassinated by a grenade lobbed by a revolutionary. Carried back to the Winter Palace, Alexander II died with his legs torn off, stomach ripped open and face mutilated. Such prizes of reform did the future Nicholas II witness at the age of 12.

Nicholas’s father, Alexander III, turned away from the reformist policies of Alexander II. It was after his father’s reactionary policy that Nicholas II would model his own. However, Nicholas’s father did not think much to his son, denying him the training in statecraft required for an emperor-in-waiting. This proved to have been a dire policy when Alexander III died unexpectedly at the age of 49, thrusting power was thrust into his son’s unprepared hands Receiving the news, Nicholas II asked: ‘What is going to happen to me and all of Russia?’ It was a question which would find its gruesome answer 23 years later in a Siberian basement.

Nicholas’s reign was pockmarked with disaster. The Russo-Japanese War of 1904-5 was the clearest demonstration of tsarism’s manifold failings. Expecting to defeat the Asiatic rival with ease, the empire’s military was bitterly humiliated. The Baltic fleet was redeployed via the Cape of Good Hope to East Asia, only to be annihilated at the Battle of Tsushima.

It was, however, the Great War that sealed the empire’s and Nicholas’s fate. Despite the repeated warnings of Nicholas’s infamous counsel, Grigori Rasputin, that entering grossly unprepared into the war would see the destruction of tsarist Russia, Nicholas pressed ahead. Late-stage overtures for peace negotiations were futile once the wheels of war had begun roll. Disintegration was soon to follow.

As Nicholas removed himself from Petrograd (now Saint Petersburg) to be near the front, the situation in the then capital began to deteriorate. Rumours of the German-born Tsarina Alexandra’s improper relationship with the wandering holy man from Siberia spread rapidly. Accusations that her sympathies lay with the Kaiser were rife.

Despite glimmers of success on the Eastern Front in summer 1916, Russia’s fighting ability began to unravel. By early 1917 the situation for the tsar had become untenable. Losses were catastrophic and the supply chains across the country had broken down. Strikes and protests were commonplace; rioters broke into shops to get basic essentials.

With his ministers pleading for him to resign, Nicholas II did so. Hundreds of miles away from his capital in a railway siding near Pskov, in March 1917 the tsar abdicated the throne in the name of himself and his son, Alexei, marking the end of 300 years of Romanov rule.

Abdication brought with it uncertainty. Discussions over what to do with the ex-tsar and his family swirled. Proposed exile in Britain was met with anger in Left-wing circles, leading to the British government eventually withdrawing its offer. The family had no luck finding other havens.

For the next 16 months, the former royal family were kept in a creeping state of imprisonment. Under the Provisional Government, which struggled to control Russia between the February and October revolutions of 1917, the family were first kept at Tsarkoye Selo, just south of Saint Petersburg. Soon they were moved to the Siberian town of Tobolsk.

It was here where the screws began to tighten. Conditions grew more draconian after the Bolshevik seizure of power. Nicholas busied himself chopping wood, sometimes joined by his 13-year-old son Alexei when his health permitted.

After having four daughters, the arrival of a male heir in 1904 had been greeted by the royal parents as the greatest blessing. However, it was only a few weeks before it became apparent that Alexei was haemophiliac.

For his mother, who had lost her brother to the same disease, the blow was unbearable. Fervent praying and desperate hopes of a miracle cure were to take up much of the rest of her life and led her into the arms of Rasputin. Nicholas was not ignorant of the risk of courting this strange personality, but he justified it thus: ‘Better one Rasputin than ten fits of hysteria a day.’

Below is a video I made in Pokrovskoye, Rasputin’s home town.

Tomorrow: End of a dynasty