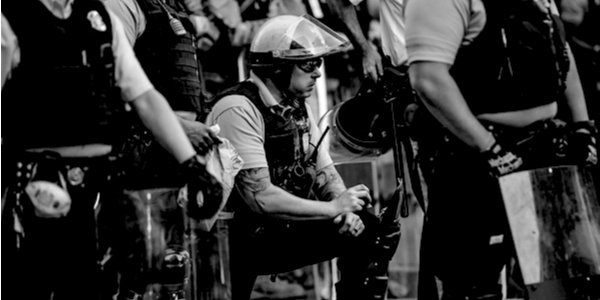 LAST week Channel 4 began a new run of Celebrity Gogglebox (‘People filmed at home watching other TV programmes, m’lud’). A few of the participants from the previous series have returned; unsurprisingly, one of the duos not back on screen is the thespian pairing of cousins Emilia and Laurence Fox.

Since his Question Time appearance in January, during which he dared to suggest that Britain is the ‘most tolerant country in Europe’ and not a cesspit of racism, Laurence Fox has been a hate figure for the Left. Initially branded a ‘disgrace to our industry’ by Equity, the union’s subsequent apology prompted its entire race equality committee to resign. The former chair, Daniel York Loh, was unabashed: ‘It’s nothing to do with me and I apologise for nothing.’

Unlike most other public figures who let slip a career-threatening opinion, Laurence Fox did not issue the customary mea culpa: under bombardment by the Leftwaffe, he has remained resolute and unrepentant. If only Channel 4 had retained Fox and filmed him watching news coverage of the Black Lives Matter demonstrations, the new Celebrity Gogglebox might have been worth watching. Instead, Fox has been confined to ridiculing the virtue-signallers on social media who shared black squares – ‘Instagram appears to be broken’ – and tweeting his succinct and acerbic reaction as the ‘peaceful protests’ descended into inevitable vandalism and violence.

He further prodded the hornets’ nest during an interview given to talkRADIO on Saturday’s anniversary of D-Day: ‘It’s worth remembering today that hundreds of thousands of soldiers landed on the beaches of Normandy 76 years ago to fight fascism, which was a real word back then and has now turned into a casual insult.’

While noting that ‘these men died on the beaches so people are free to do what they want’, Fox distanced himself from the self-loathing saps who have spent much of the past week on one knee: ‘If you want to “take a knee”, you can “take a knee”, you just won’t find me doing it . . . there is a master-servant relationship that comes with “taking a knee” that I’m uncomfortable with.’

Earlier in the week, the black British rapper Zuby – now an articulate Right-leaning voice on many a podcast – told white liberals to ‘stop this tomfoolery immediately’.

‘Tomfoolery’ does not even begin to describe the nauseating spectacle of police meekly obeying demonstrators’ demands to bow before them. In the clip below, view the servility and try not to retch.

In London, Metropolitan Police Commissioner Cressida Dick belatedly told her officers to desist ‘because our job is to police’. If only she had given the order earlier in the week, we would have been spared this submissiveness at the entrance to Downing Street. Downing Street!

Yet the mob later scaled railings and attacked police regardless. Despite his being ‘horrified and deeply troubled by the images of violence and abuse among protesters outside the gates of Downing Street and in Trafalgar Square on Wednesday’, Conservative mayoral candidate Shaun Bailey nonetheless found it ‘so moving to see several police officers near Downing Street “take the knee”.’

Bailey also told talkRADIO that not only was this display of weakness and submission ‘exactly the right thing to do’, he termed it a ‘very British version of “taking the knee”,’ whatever the hell that means.

Shaun has previously been a welcome voice of social conservatism – in January 2019 I praised him here – but his recent drivel could just as easily have been spouted by Sadiq Khan.

At least there is one London mayoral candidate (and occasional contributor to TCW) who remains sound. The unequivocal message from Independent David Kurten to servile police officers is: ‘Get off your knees!’