NewsPaperthe art of publishing
HomeCulture WarsLatin? It’s all Greek to me
0

Latin? It’s all Greek to me 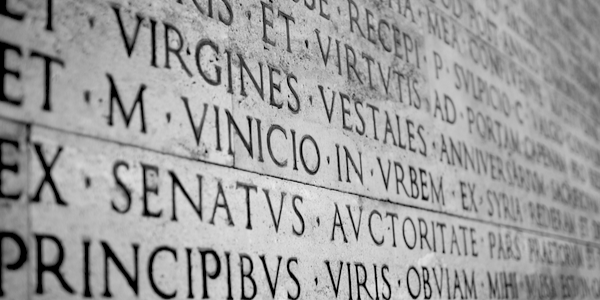 NEWS that Latin is to be taught at 40 state secondary schools to stop it being seen as an ‘elitist’ subject brought back memories of my first encounter with it almost 60 years ago.

I must admit I feel a little sorry for today’s youngsters trying to sort their ablatives from their accusatives, while finding their way round declensions, diphthongs and deponent verbs. I failed utterly.

Starting grammar school aged 11, I was excited at being given the chance to learn another language and looked forward to impressing friends and family with my bilingual fluency.

You could choose to study a modern language such as French, German or Spanish – most of us chose French – but it was compulsory to take Latin as well.

For some reason, I took to French almost comme un canard dans l’eau and eventually passed at A-level. But Latin was much harder to learn and I simply couldn’t get my head around it.

I suppose it didn’t help that the dog-eared, graffiti-scarred textbooks we were given were almost as old as Rome itself. I swear mine had Ego Claudium hoc libro habere (I, Claudius, own this book)scribbled on the inside cover.

The illustrations were line drawings of self-satisfied blokes in togas declaiming in the forum, or reclining on couches as they quaffed wine and peeled grapes – doubtless looking so smug because they could speak Latin perfectly.

All I now retain from those curled, yellowing pages is how to conjugate the verb ‘to love’ – amo amas, amat – and the priceless phrase: ‘Videtus-ne dominum et servum’ (Do you see the master and the slave?)

That’s come in very useful over the years as I relax in my villa or watch the Lions v Christians matches at the local arena.

The upshot of being baffled by Latin lessons was that as soon as we were allowed to ditch it as a subject later in our school careers, I and many of my fellow pupils did so.

However, in those days you couldn’t get away from Latin if you were a Catholic churchgoer, because it was still used for conducting Mass.

I’m sure millions of the faithful – myself included – could never understand why the Church chose a dead foreign language for its most important communal rite, but we were too scared of eternal damnation to raise the matter with the priest.

Missals – guidebooks for the Mass – came with an English translation alongside the Latin. The Vatican could have saved a fortune on extra printing ink by just holding the Mass in English, as I understand most churches now do.

Inevitably though, certain words and phrases from the Mass stuck in my mind and still resonate decades later, such as mea culpa, mea culpa, mea maxima culpa (through my fault, through my fault, through my most grievous fault) and Agnus dei, qui tollis peccata mundi (Lamb of God, who takest away the sins of the world).I must admit the Latin phrase we youngsters most wanted to hear after an hour of standing and genuflecting was Ite, Missa est (Go, the Mass is ended).

Having said all this, I don’t mean to decry Latin, which is intricately woven into our social and verbal history. I was always interested in how it formed the roots of many of our English words, and how during the Middle Ages and beyond it was the universal language of learned men throughout Christendom.

Well into modern times, family doctors wrote prescriptions in Latin, and the Latinised classification of flora and fauna initiated in 1753 by the Swedish naturalist Carl Linnaeus has stood the test of time.

And let’s not forget we still use many expressions in the original Latin, such as ad hoc, caveat emptor, per annum, post mortem, et cetera.

Anyhow, as always with these blogs, there’s a danger of going on ad nauseam and becoming persona non grata. I’ll end by urginganyone wanting to learn Latin not to be discouraged by my schoolboy tale of woe – I was a lazy so-and-so – and wish you benediximus.