NewsPaperthe art of publishing
HomeNewsLaura Keynes: Fatherless families costs us all a lot more than Birmingham’s...
11

Laura Keynes: Fatherless families costs us all a lot more than Birmingham’s £100,000 tribute to single mothers 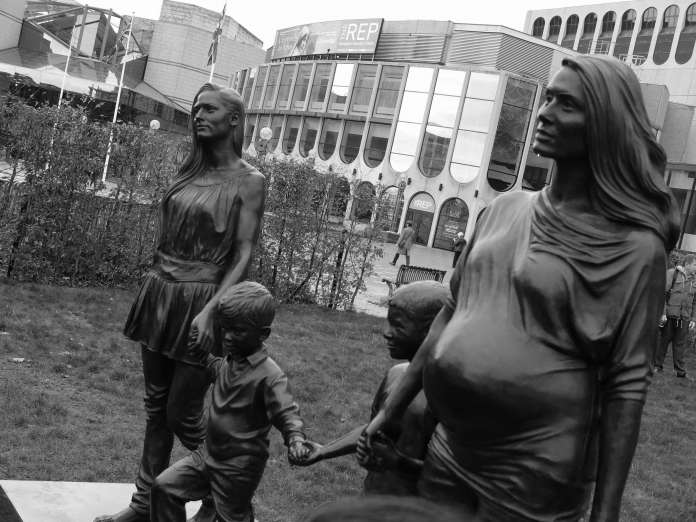 A new £100,000 statue has gone up outside the Library of Birmingham.

The artist states: “A nuclear family is one reality but it is one of many and this work celebrates the idea that what constitutes a family should not be fixed.”

The statue gives the impression that the sisters are doing it for themselves. Everyone looks so smiley and happy, it almost asks the viewer to forget the obvious question: where are the dads? The sisters might be having a whale of a time raising three kids on their own – they look like they are –  but at some point men were involved. Whoever they were, these guys seem to have done a runner, leaving the women to bring up sons alone.

This might be the face of the modern family, but is it something really worth celebrating? It’s true that families come in all shapes and sizes these days but the nuclear family has a special status for a reason: it gives children the best start in life.

Numerous studies have shown the effects of growing up without a father. Children living without their biological fathers are more likely to live in poverty, tend to get into more trouble at school, have a higher risk of health problems, and are at a greater risk of suffering physical or sexual abuse.

Lone mothers tend to be poorer, and are more likely to suffer from stress, depression, or psychological problems. The consequences for society aren’t good. Fatherless families lead to an increase in crime and violence, dependence on the welfare state, and set a trend for fatherless families in the next generation.

The tragedy of that is simply glossed over by this particular piece of public art. The weight of evidence falls in favour of the traditional family, a married mother and father raising their biological children together. This sculpture might make the citizens of Birmingham feel better about their own less-than-ideal family circumstances, but it buys into a lie.

It’s one thing to say that modern families don’t look like the traditional family unit. It’s quite another to say that what constitutes a family “should not be fixed” and actively to “celebrate” fatherless families.

Birmingham City may be pleased to pay £100,000 for public art, but will it be so pleased to foot the social bill for endorsing fatherless families?