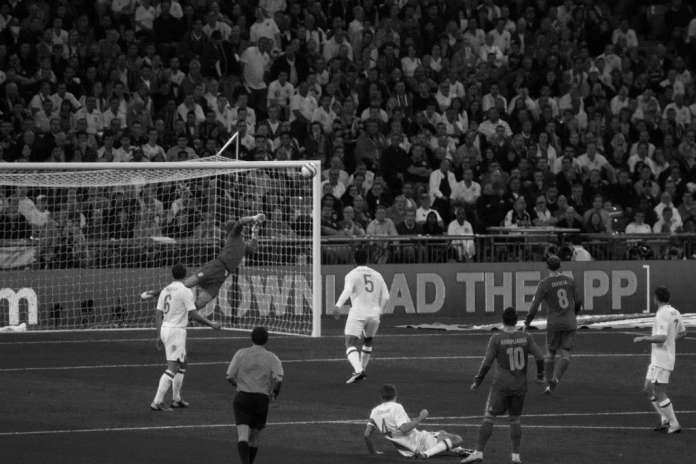 Laurie Penny has written a spectacularly humourless piece for the New Statesman on why she won’t be watching the World Cup. Apparently “the left has more important things to do”.

“This country is in crisis”, she moans, “Young people are in crisis, poor people are in crisis.” Yes, it’s a catalogue of misery up and down the country. If you’re young, poor or a woman, never have you been so disenfranchised as during these few weeks of World Cup football. Anyone who waves a Union Jack at the telly is oppressing you with their misogynistic “corporate sponsored quasi-xenophobia”.

The World Cup is “only and always about men” says Penny. Football is “no longer the people’s sport” because it “violently excludes more than half the people”.

Say what? So that would be me then, betraying the sisterhood and oppressing the poor, because I will be watching the World Cup and enjoying it too.

It’s true I fail to get excited by endless rounds of club football, but World Cup football is different. I watch it for the same reason I watch Olympic figure skating or gymnastics. It’s a hymn of praise to athletic beauty.

Any given World Cup match will produce a move or a play that can legitimately be described as ‘beautiful’. Take Robin Van Persie’s goal on Friday in the Spain vs. Holland match.

It wasn’t just the thrill of seeing such an audacious goal, it was the curvature of his body in space echoed by the line of the ball – utterly beautiful. You don’t need to be a man, or a footballer, or have a degree in philosophical aesthetics, to appreciate this. You only need to be human.

Athletic beauty is entirely democratic – anyone can enjoy it. It takes you out of yourself. It’s an experience of something bigger than the self. Who doesn’t need a bit of that every so often?

The news is so unremittingly awful at the moment – rapes in India, abductions in Nigeria and Kenya, atrocities in Iraq and Syria, child prostitution in the slums of Rio – I can’t spend every waking minute dwelling with these stories or I’d go mad.

Laurie Penny might think enjoyment of football short circuits social conscience but it’s only human to want to be lifted out of the cares of real life for ninety minutes or so. The problems don’t go away in the meantime but they do seem more bearable when faced again with renewed lightness of spirit.

As for the idea that I should be mightily aggrieved at the status given to men’s World Cup football, just because I’m a woman… I’m sorry, I really can’t identify. I’ll leave it to humourless leftie feminists like Penny to moan about how “the women’s league, held separately next year, garners barely a fraction of the media coverage”. I’ve no interest in the women’s league, and I don’t think it’s a betrayal of feminism to say this out loud.

Feminism is not feminism when it tries to do what men do, as though what men do is somehow better, something to aspire to. Men and women are different. Different physically, different emotionally. Fact of nature. Men are more powerful and muscular – that’s the physical reality.

I don’t want to watch the women’s league because for a start I hate how women look in men’s kit (wrong wrong wrong) and secondly it doesn’t have the same speed and power.

That’s not to say there shouldn’t be a women’s league. There’s just something more dramatic about the male form – all that muscle, bone and sinew – going full tilt and clashing on the pitch. It makes for more exciting football. It can be violent, yes, but “violently excluding”? Only in so far as Nature excludes men from being women and vice versa.

I don’t, personally, experience the fact that I can’t play football with the same speed and agility as a man, as ‘violence’ against me. It’s just the way things are. Accepting that fact allows us all – men and women – to enjoy the spectacle of elite athletes performing at the top of their game.

Even if England gets knocked out, there’s plenty to enjoy about this tournament. World Cup 2014 will offer some great sporting moments, and I for one don’t want to miss the action.