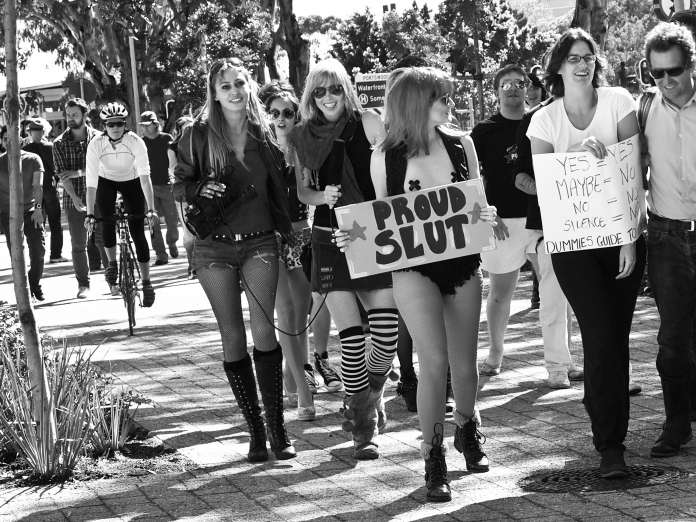 The feminist geniuses are pretty rubbish when it comes to relationship advice, life advice or indeed advice of any kind. Much of it consists of nagging men to do more chores or just plain sulking when they are not on board with the new regime.

The latest, I read is to “enjoy yourself, have the kind of sex you’ll look back on in your eighties and blush” with the bad boys, but marry the good guys, or a “beta bloke” as described in this other piece.

“But for any woman who craves a FTSE 100 job, I would suggest you marry a man who likes to shop and mop; a beta bloke who will adore you, not bore you and do all your chores for you — a “wife” in other words.”

This I am told is what Sheryl Sandberg advocates – date the bad boys but marry the good guys so that he can be on board with your career plans and help you to “Lean In” at work.

My big problem with feminism is that it always ignores the inconvenient truths – namely how human nature works. Granted if you spend most of your days denying the prominent and gigantic differences between the sexes, being ignorant of human nature is the least of your worries. Still, this double whammy is a golden thread that runs through much feminist discourse.

Rebecca Reid’s error in the Telegraph is that she blithely assumes that the good guys will automatically acquiesce with this grand plan. She seems to believe that they will not mind at all being ignored while they are in their twenties while the girls have their fun with the ‘bad boys.’ Then suddenly when the girls want to marry, have kids and the white picket fence, they just have to click their fingers and the nice guys will instantly ‘jump to.’ I doubt it.

In my experience being nice does not mean being a doormat. I don’t think the nice guys are going to just sail along with this – brutally ignored while they are building their careers in their twenties and then expected to propose to the very girls who have ignored them and thought them too wet to date, or referred to them as a ‘beta bloke’.

This is even more the case when the marriage bargain is to do 50 per cent of the childcare, clean the toilet and listen to Jenni Murray on Woman’s Hour to remind him everyday of his ‘privileged position’ and how he should feel bad about it.

The other problem with this ludicrous advice is how it dodges, as I have said, gender differences. Nice guys don’t tend to want to marry girls who have been ferociously promiscuous with bad boys (or as Reid delightfully put it is ‘screwed six ways ‘til Sunday’). That is why they are nice guys.

I hazard a guess that nice guys want to marry nice girls and don’t view such women as ‘marriage material’ or indeed mother material. They won’t tell you this, and the feminists will tell you they are sexist for holding such views, but it is the truth.

The other truth is that even if you did find some sucker willing to jump on board, your previous history will seriously damage your proposed ‘nice guy marriage’. The nice guy knows that he will be compared to the Alpha man or men who have treated you to “a last-days-of-Rome style shagathon.” This is off-putting and likely to dent his confidence.

The other problem is the feminist herself will compare her beta husband to the Marlon Brando of ‘bed breaking, sheet ripping, hair-pulling sex’ of her previous decade (who paid for all this damage was not answered in the piece). This might not be her intention, she may even feel guilty about it, but again it is human nature. If you spent much of your twenties in Barbados you will long for the sun while slumming it in suburban Slough.

All of this means that it is much more likely you will want to escape your dreary suburban life for the bright lights of an affair with a bad guy. So there is more infidelity, more martial breakdown and much more misery for the kids. If I were a nice guy I would be running a mile.