NewsPaperthe art of publishing
HomeLaura PerrinsLaura Perrins: No one votes for a coalition. It just gets imposed...
0

Laura Perrins: No one votes for a coalition. It just gets imposed in a shabby back-room deal 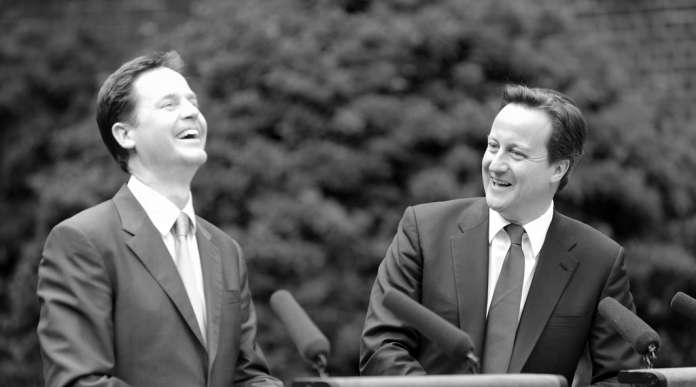 Gather round ye people of Great Britain and listen to the horror that is likely to be inflicted upon you in the not so distant future. A plague like no other. A horrible blood-sucking disease that will rape and pillage the islands. Am I talking about ebola? No, I am talking about coalition government.

I hail from the nearby island once inhabited by snakes and little known leprechauns such as Jackie Healy-Rae – he can be pictured here.

He was a member of the Irish Parliament and one of four independent MPs who in 1997 became kingmaker for the Fianna Fáil – Progressive Democrat (FF/PD) coalition government. Ireland has ‘enjoyed’ the benefits of coalition thanks to its fiendishly complex system of PR since time of yore.

In return for supporting FF and the PDs in coalition, Healy-Rae secured huge amounts of what the Americans would call ‘pork’ for his constituency. Great for the constituents but pretty rubbish for everyone else. In fact, Healy-Rae was again re-elected in 2007 and signed a ‘confidence and supply deal’ with FF promising to support the government in return for “investment” in his South Kerry constituency. So in the following years, while the rest of the country faced savage austerity,  South Kerry was paved in gold.

It seems now that this completely undemocratic form of government is likely to be inflicted upon my adopted country. Those who benefit from it – such as the Lib Dems who represent hardly anyone yet become power brokers – like to sell this as a huge benefit for the electorate. It is not. It is neither beneficial nor democratic.

As Nick Wood pointed out here, the Lib Dems have crashed in the opinion polls and represent the views of about two bearded hippies somewhere in Brighton. Yet, they may still find themselves returned to power at the next election. They will attempt to say this is democracy at work – the people have ‘chosen’ them to ‘moderate’ either the Tories or Labour. The people have done no such thing.

The people have not been given the option “Coalition” on their ballot papers. In fact, they are only given the option of which candidate to vote for, not which party. So it is nonsense to say the people voted for the Coalition and for the Lib Dems to form it. It simply means not enough candidates of either Labour or Conservative persuasion were returned to Parliament.

Now, I do think some fault lies with voters who vote for tribe and not individual. On Radio 4 they mourned the fact that the only reason the voters of Clacton-on-Sea supported Douglas Carswell was because ‘he did a good job locally.’ And why else – might I ask – would you vote for him? This is a perfectly legitimate reason to cast your vote.

Voting for someone because he or she is a Red Prince or Princess belonging to the tribe is a stupid reason to vote for him or her. I have heard of MPs living in London running for constituencies based in Newcastle. This kind of carpet-bagging would not be tolerated where I am from: you have to have attended at least 100 local funerals before you could even consider running for an Irish constituency. But here voters say, Oh, you are from Islington and I live in Sheffield. Here – have my vote. And then they moan that ‘everything stays the same and nothing changes.’ That is because electors vote for people who do not care about them!

The major disadvantage for a country ruled by a coalition is the shameless, aimless, horse-trading that goes on. The free school meals trade for the marriage tax allowance was a prime example of this. Cameron’s sanctioning of universal free school meals, a universal service in a time of austerity, was grossly irresponsible, but then he had to bung Clegg something to get the transferable allowance through.

Free school meals have been widely derided as shambolic and under-costed,  generating even more debt for this indebted country. But this is what you end up with when governed by coalition. Expect more of this naked horse-trading should Clegg miraculously find himself with best mate Dave next time around. It is almost enough to make me vote Labour.