NewsPaperthe art of publishing
HomeNewsLaura Perrins: Pity infants don’t have a vote. They would not buy...
5

Laura Perrins: Pity infants don’t have a vote. They would not buy Dave’s purge of childhood 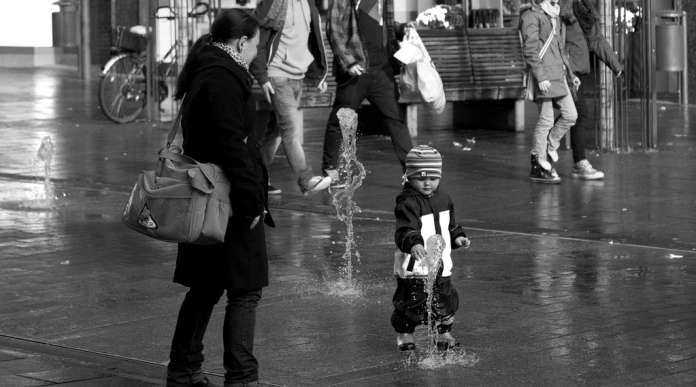 It is the boys I feel sorry for. They are the ones who will really suffer from this new Conservative Party push to get three-year-olds in institutional care from 9 am  to 6 pm, five days a week.

Do you think that George Osborne, or boy Gideon as he was then known, spent the pre-school years of his childhood cooped up in some nursery? Or was he out in his no doubt vast garden with mummy or nanny or both at his beck and call? I know that the boy Gideon will have spent those years playing outside when possible, climbing trees and doing all the things boys should be doing. Not for him serious nursery time.

Girls should be doing this also, but they will cope in institutional care, in general, better than the boys.

In the week that this great purge of childhood was announced, two pieces caught my eye. Laura Freeman talked about Skype fathers here, reminding us that, “so much of being a parent is about being physically there.”

Caitlin Moran thought it was odd that some parents have their children “looked after by an organisation. A company to which you pay hundreds of thousands of pounds, but which is staffed with people you’ll have barely spent 20 minutes with – and, indeed, most of them you will never have met.” She was talking about boarding schools, but it is the same for nurseries only this time the kids are 10 years younger than the boarder.

Do you think either author would apply the same logic to children in day care? No, of course not as it goes against their much vaunted feminist creed.

There is so much wrong with this scheme, in detail and globally that it is difficult to know where to begin. The economic flaws you can find here.

The problem with treating pre-school years as a time to get children ‘school ready’ you can find here.

The problem with long hours in nursery care you can find here.

But, what is really galling is how this political class, egged on by their mates in the media with time to spend bitching on Twitter about how childcare is so expensive, puts political imperatives and tax revenues above the real needs of children. It is sick. Cameron, Cameron, the childhood snatcher.

One childcare provider on Twitter said, “The only way we can offer 25 or 30 hours of childcare at the current funding rates is if parents are not fussed about the quality.”

I don’t know how three-year-old boys are supposed to survive all-day nursery care for 4 or 5 days a week. Yes, nurseries have outside space but it is not the same. If I kept my little boy in care for that long (he does two mornings in a Montessori) there would be little boy shaped holes in the walls of my house.

He would start literally climbing up the shelves and abseil down. This is the irony of the label stay at home mum – weather permitting I try to spend as little time at home as possible for my boy’s sake and mine.

What is even more galling is how these very same media lot then fill up our Saturday supplements with reports on the rise in childhood obesity, how the kids are rarely outdoors and don’t know the difference between a crow and magpie. How children no longer take risks or climb trees. How they are anxious and stressed out for some reason we just cannot quite put our finger on. I can and I point my finger directly at policies such as these – stealing mothers from pre-school children. It takes a special sort.

Anxious children are on the rise because they are on to us, or at least this new norm of preferring non-maternal care. Children are simple creatures with one overwhelming simple need – the need to spend time with the one they love the most – Mum or Dad. Don’t bother patronising me with the nonsense on correlation and causation. I know the difference you bozo.

I see the impact of this new norm every day with my own two eyes. There are good childminders out there and good nurseries, but I also see the childminder who always, always without fail has her two charges strapped in a front facing Phil and Teds pram while she is on the phone. For 30 minutes in the library and 30 minutes in the playground and No, they were not asleep.

I saw it yesterday when I passed the nursery that had a fire drill and the children and babies were outside crying. The three babies bawling their heads off in a Romanian style cot with wheels on to make it easier to manoeuvre. I see it while you are on Twitter.

It is so easy to promise £5,000 to a ‘working family’ per year with childcare bribes. It is much harder to give space for relationships and intimacy to grow and develop. The small moments like the handholding, the swing in the park, the run down the slide or sharing an ice-cream. You cannot put that in a manifesto – it won’t get as many votes.

As George Osborne and Dope Dave hold out their sticky little hands, handing back money to parents (it is all part of the tax churn, folks) even though as a single income family we pay a disproportionate amount of tax, I won’t be taking it. I will be taking the sticky little hand of my son instead. You can put that in your manifesto and smoke it.