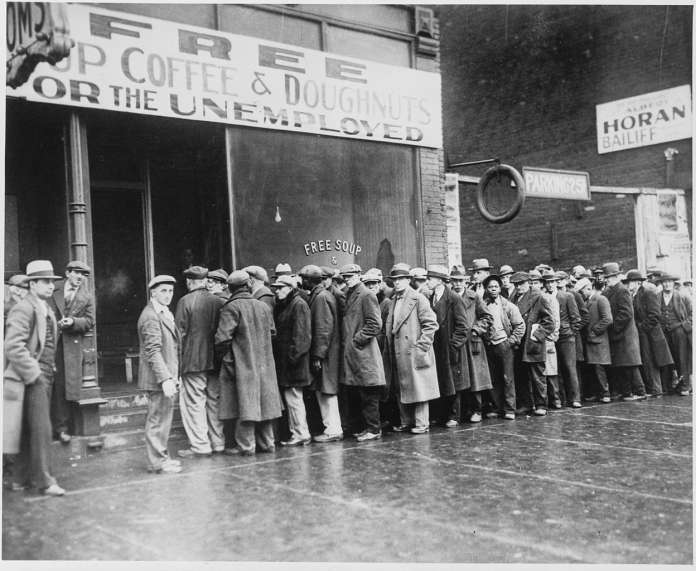 Something strange is going on with the working class men of America. Many in this class of men are no longer working, and it is not for the lack of jobs.

As Charles Murray explains in White America – while upper middle class men (and their wives) work more and more, working-class men work less and less to such and extent that we must insert those quotes – the working class man, is now the ‘working’ class man. This phenomenon has caught the attention of the White House and is said to have caused the rise of Donald Trump.

In fact, an incredible ‘7 million American men between the ages of 25 and 54 are neither working nor looking for work. That amounts to 12 per cent of all men in those prime working ages – and that doesn’t count another 2 million who are looking for work but haven’t found it.’

These numbers are staggering and have commentators from Left to Right in a flap. In fact, “participation among prime-age men peaked in 1954, declined only slightly until the mid-1960s, and then began to decline in earnest in the decade between 1965 and 1975. Since then, participation has fallen persistently, with sharper declines in recessionary periods that were not fully reversed in the subsequent expansions,” according to this official White House report.

So it seems just as women were liberating themselves from the prison of the home, working class men have liberated themselves from work. Perhaps unsurprisingly one liberation – that of women – has been celebrated, but the other is causing panic.

Ah, but my feminist sisters say, these men are just the new modern man. They are taking over childcare and home duties while their partners go to work. That was our grand plan it is all coming to fruition. Not quite.

Instead, these men are having a bit of ‘me’ time. “They’re not spending any more time on child care or chores.” Instead these men spend up to 10.5 hours a day on media in all its form. They are playing Grand Theft Auto is what they are doing.

This commentator views this as an ominous sign, “the time and money these activities rob from relationships, work, and savings can hardly be overestimated.”

What has caused this collapse in work ethic in the ‘working’ class man – it cannot be solely the draw of the gaming experience? What, now remind me again, happened between 1965-1975 in the US? Ah yes that was second wave feminism telling men how they were ‘tying women to the kitchen sink’ while the husbands enjoyed the life of Riley outside it (The Feminine Mystique was published in 1963).

And the husbands were having a great time in the working world, were they are not? Here, Jack Arnold the patriarchal father in the classic Wonder Years, explains the fabulousness of it all to his son. “I get up at five in morning. I fight traffic; I bust my hump all day. I fight traffic again and then I come home. And then I pay my taxes. The end.” And Jack was middle-class – so you can just imagine what it was like for the working class man.

So should we really be surprised that the ‘working’ class man says, you know, thanks – but no thanks. What with welfare, he can just about make it through and no longer needs the often spirit crushing job he had to support his family.

Because this is something the feminists never thought through – men can opt-out and survive. They will not thrive, and I think ultimately it is at great personal loss to themselves and others, but if they don’t like the family and work deal offered, they’ll just opt-out of both. They will not organise, they will not take to Twitter they will just ‘socially withdraw.’

The truth is since the 1960s the working class man has not only seen his economic prospects hit, but more fundamentally his position in society has been trashed. The status he had as ‘head of the family’ no matter how menial and meaningless the job was on its own, had meaning and dignity as it sustained a family.

But this status has been gradually eroded over the decades, first by the feminists, who poured scorn on the husband who provides, then by the welfare state who said we can do this job better than you, and finally by the liberals who said fathers were surplus to requirements.

All of this spells disaster of course for the working class woman who is left scratching a living in low-paid jobs and welfare while holding the baby. This will cause the elite with their married dual career parents to pull further away, while the children of lone mothers fall further behind. And the liberals will continue to decry this ‘inequality’ without ever grasping the fact that they caused it.