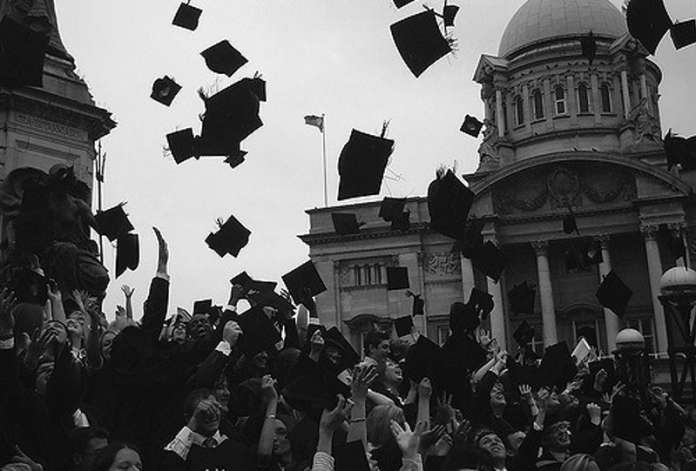 Should there be a panic about women dominating university admissions? I don’t think so, but not because I do not have the interests of men at heart. In fact, for most of these young men, they are making a smart move.

Mary Curnock Cook, head of the Universities and Colleges Admissions Service (Ucas), this weekend urged those teenage boys who will receive their A-level results on Thursday, but who have still not decided what to do after leaving school, to sign up to higher education.

“I have a special shout-out for young men who might be dithering about going to university: whatever you study, you’ll come out of the experience with a much clearer sense of your future self and full of ideas about how to make the most of your life and career,” she said.

Dear me, since when was a university degree just another path to self-discovery? I don’t think you need a university degree and £40,000 debt to have a clearer sense of self or indeed to make the most out of your life. Anybody who does think this has spent too much time in an ivory tower.

In time, I believe, the smart money will be on the young men who saw the writing on the wall and made the intelligent choice to turn their backs on the academic route, an over-priced, over-hyped exercise in ‘self-discovery’ much of which – outside of STEM (science, technology, engineering and mathematics) – is dominated by liberal, feminist clap-trap and reference to these same young men as privileged, ‘cis-gendered’ males. No wonder men are turning their backs on this kind of nonsense and the more that do so the better.

Comparing simple statistics does not tell the whole story when it comes to university admission. First, nursing which women dominate, was converted from a diploma to a degree course, which immediately pushed up the female numbers. Likewise, women also dominate teaching and social work. I have explained before how STEM degrees are the degrees most likely to lead to lucrative careers and they remain male dominated.

It is ironic that this female domination of campus comes at time when the feminists are still trying to sell us the lie that there is a ‘rape culture’ on aforementioned campus. I wonder how long they will be able to keep it up as some universities become women-only domains?

Perhaps, just perhaps, young men think they have better things to do with their time than study an arts degree for which they will be made to endure a compulsory consent workshop at the beginning of university. Perhaps young men do not want to be accused of rape before they set foot on a feminist-dominated campus. And all for the princely sum of £40,000 per degree, for which there is no guarantee that you will out-earn your non-graduate friends.

This piece explains that already “the lowest quartile of graduate earners fared significantly worse. A year after they graduated in 2004 their median earnings were just £11,500, rising to £16,500 after three years and £20,000 after 10. The average wage in Britain is currently £26,500.” It did not give a gender breakdown.

Even if you do earn the much-trumpeted ‘graduate premium’ there is the still the issue of loan repayment. Recently, there were calls for politicians to stop promoting the idea that there was a graduate income bonus, when for many this has disappeared. Those who do “should be charged with gross mis-selling”, says Angus Hanton, co-founder of the Intergenerational Foundation (IF) lobby group. “Paying off these huge, unquantifiable and relatively unregulated debts will wipe out any graduate premium in all but the highest-paid professions.”

Mark my words, in 20 years time the feminists will be moaning that somehow, even though women ‘dominate university’, men still out-earn them. That is because men flock to STEM subjects, which do lead to higher paying degrees. In addition, some men will turn down an offer of a degree and accept an apprenticeship at PwC or an engineering apprenticeship with BT.

Instead, women armed with their arts degree and £40,000 of debt will remain low earners wondering where it all went wrong.

I predict that apart from STEM, law, medicine, dentistry and business degrees, many degrees will quickly lose status. It will be apprenticeships with top firms that will become the most sought after qualifications. Do not be surprised if they are dominated by men.

Share
Facebook
Twitter
WhatsApp
Email
Previous articleRob Slane: How a King tricked women into filling his treasury
Next articleCerberus: May needs to put an end to Brexit summer squabbles