NewsPaperthe art of publishing
HomeNewsLaurence Hodge: Europe needs us more than we need them
2

Laurence Hodge: Europe needs us more than we need them

To say that Lib-Dems tell untruths is no more original than to enquire into the faith of the Pontiff or the sylvan location of ursine whoopsie. But Nick Clegg’s oft-repeated and ludicrous claim that three million jobs depend on British membership of the EU needs to be challenged vigorously and often, while EU-funded supporting acts should also be vociferously refuted.

We can expect pro-EU propaganda, often with no basis in reality, to be repeated with increasing frequency as the Greek economy heads further down the tubes, Germany becomes understandably more obdurate and the Euro exchange rate continues to plummet.

The shakier the whole EU edifice becomes, the more crucial to its continued existence is British  participation and British underpinning of the EU budget via a  contribution equivalent to £55 million per day.

Ed Miliband, desperate to shore up his lamentable standing with business, currently makes much of his pro-EU and anti-referendum stance because bodies like the CBI endorse continued British membership.

While it’s certainly true that businesses, markets and human beings in general dislike uncertainty and it’s equally true that change of any kind involves disruption, we’re used to this because we have lived in a changing environment for as long as we have walked on two  legs. So why the obsession with the impact that British withdrawal  from the EU might have on just one side of our trade?

Put it another way: why do we not hear whining from The Society of Motor Manufacturers & Traders? Why does the British Retail Consortium not bellyache about the importance to them of EU membership? Could it be that they and many of the companies they represent recognise that they will never have a problem procuring goods from the EU to supply to their customers here?

Paradoxically, exports seem to be uniquely and mysteriously vulnerable but imports will continue to hold up because apparently overseas  suppliers will still want to sell us their goods and services and we shall still want to buy them.

It is worth pointing out, though, that our balance of trade with the rest of the EU is overwhelmingly in the EU’s favour and the gap between our imports and exports  is widening year on year. The lie that Clegg and now Miliband are  peddling ignores the simple fact that our ability to buy stuff from  our trading partners overseas must be impacted by our ability to sell  them goods and services in return, since a one-way-street worth in  excess of £216bn in 2013 is unsustainable for even the most ardent Europhile. 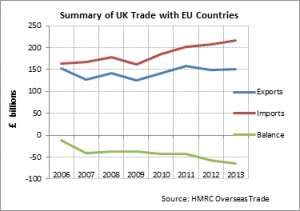 In any case, our overseas customers do not buy from us as a reward for belonging to a trading bloc but because our goods and services are desirable. The notion that the EU would erect tariff barriers against UK exporters as some sort of economic reprisal is not only absurd in the circumstances but would be matched by new customs duties here, which is a scenario that has only losers.

Instead, consider net EU exports to this country being worth £65.3 billion in 2013, and combine that with a stagnant Eurozone economy and a euro/sterling exchange rate in sharp decline (which will widen the trade gap still further as the competitive advantage moves across the Channel) and it’s obvious that the EU needs jealously to safeguard its trading relationship with the UK.

Even if in a nightmare parallel universe the EU Commission were sufficiently small-minded and spiteful to attempt a boycott on the UK as a punishment for our effrontery in quitting, how would the chancelleries and trade ministries in the member states react?

The UK operates a trade deficit with all bar seven member states and any trade sanctions in reaction to British EU withdrawal would be hugely counter-productive.

Germany has a stonking trade surplus with the UK but who honestly believes that, say, the boardrooms of Mercedes, BMW and VW tremble at the thought of no longer having access to the UK market? 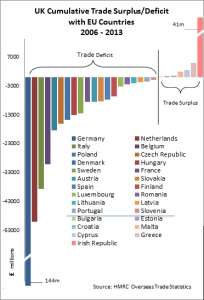 If we are going to worry about the impact that Britain leaving the EU will have on our exports, then how much more reason do the Germans have to worry about what they will be able to sell to a post-EU UK?

Politicians and others who claim so earnestly that our exports to the EU are imperilled by Britain leaving the club are being fundamentally dishonest if they neglect to look at our overall bilateral trade with those countries.

Instead of turning to the CBI whose members are perfectly content with and even helped fashion the status quo, let them produce instead some bosses of EU exporting companies, if they can find any, who are scared of losing the UK market after Brexit.

It is manifestly not in the interests of any of our European trading partners to place obstacles in the path of good and established trading relations.

Britain has been trading successfully with Europe  for centuries without the need for a centralised bureaucracy and it  can do so again.

Those who argue that the EU is essential to our  external trade are supporters of a political ideology rather than an  economic reality. If they are not making a wilfully specious and  partisan pitch for the EU, the best one can say for them is that,  timid and lacking in confidence, they subscribe to the sentiment  contained in Hilaire Belloc’s famous couplet:

Always keep a-hold of nurse. For fear of finding something worse.